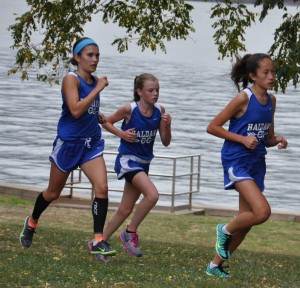 The girls finished as the top girls’ squad in the meet. Ruby McEwen was the fastest girl in the race with a time of 20:15; Kate Phillips and Taylor Farrell each posted a time of 21:06. (The two ran together the entire race with Phillips offering encouragement to her younger teammate along the way.) Heather Winne finished with 22:02, while Abbey Stowell and Samantha Ricketts crossed the line at 23:08. The girls’ team is currently 12th in New York State Class D rankings.

On Oct. 4, the boys and girls cross country teams travelled to Schenectady to compete against 23 Class C and D schools in the 74th Annual Grout Invitational for Haldane’s first appearance there.

The Blue Devils grabbed this opportunity to compete against schools their size and ran with it.

The girls finished fourth out of 13 schools. Of 110 individual female runners, McEwen led the girls, finishing 19th, Phillips at 20th, Taylor Farrell at 21st, Winne at 35th and Stowell at 47th as Haldane’s final scoring runner. 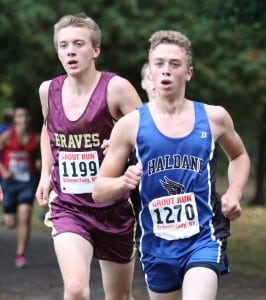 Brian Haines competes at the Grout Invitational Meet on Oct. 4 in Schenectady. (Photo by Michael Haines)

The boys finished sixth place out of 20 teams. Nick Farrell led, finishing ninth overall of 133, with Haines at 24th.

On Tuesday, Oct. 7, the teams ran at North Salem High School in the league championships. Both teams ran well, finishing second overall, losing only to Class C Pawling. The girls pushed Pawling but lost by four points; the boys lost by only two. “Although it was close, and very disappointing to lose, we now have an achievable goal for next season. I am very proud of the effort of all the runners this season,” Coach Locascio said.

Both teams will be in action on Saturday, Oct. 11, at the Bobcat Run in Byram Hills. The remaining invitational schedule follows: Oct. 18 at Bowdoin Park in Fishkill and Oct. 25 at Schodack Island State Park in Castleton. The Sectional Championships will be held at Bowdoin Park on Saturday, Nov. 1. 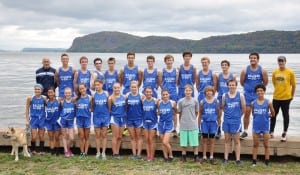 A hard battle was fought against Beacon on Friday, Oct. 3, for a final score of 4-1 with Haldane going all three sets in each of their four losses.

The girls played at Peekskill on Sept. 30 with the top four players sitting out so the other girls could get some playing experience.

Haldane and Blind Brook played an exciting back-and-forth game on Thursday, Oct. 2, in Rye Brook. Haldane was up 16-8 at the half with a final score of 28-22.

Coach Ryan McConville recounted the winning play: “Tyler Giachinta scored on a 35-yard run with under two minutes to put us up 6. Our defense stopped them to end the game; Blind Brook had the ball at our 45-yard line and Ryan McCollum broke up a pass on the third down. Chris Pidala and Tanner Froats applied the pressure on the fourth down to force the Blind Brook quarterback to roll to his right and step out of bounds before he could find an open wide receiver.”

The Blue Devils now stand at 3-2 after the victory against the Trojans.

“This was a huge win for our program, as it proved to our team that we can go on the road and compete with anyone,” McConville said. “This week we made the big plays when we needed to and got that last big stop to win the game.”

The Blue Devils take on the Vikings at Valhalla at 7 p.m. on Friday, Oct.10.