Father Robert Warren, SA, a Franciscan Friar of the Atonement, was named as this year’s recipient of the Distinguished Service Award at the 29th Annual Putnam Community Service Network’s (PCSN) Awards Breakfast on Sept. 23. 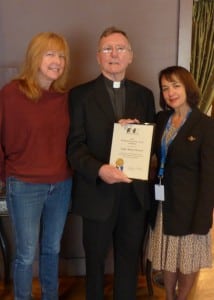 Called Fr. Bob by those who know him, Fr. Warren was nominated by Loretta Molinari of the Visiting Nurse Services Westchester.

“My first experience with Fr. Bob happened many years ago when the human immunodeficiency virus (HIV)/acquired human immunodeficiency syndrome (AIDs) health crisis first surfaced. At that time, some of us began a grass roots effort to address the illness, death and devastation that was occurring all across America and in our own Putnam community,” Molinari said. “Very few people wanted to acknowledge or even discuss the disease at first because it was not at all understood and very much feared. Once it became associated with the gay population, many reacted out of this fear and in ways that severely stigmatized anyone in the gay community.”

Fr. Bob was among the small group of citizens who reacted with grave concern at the treatment of those with the illness and stood up to take action. With his participation as the spiritual guide, the Putnam AIDS Task Force was born.

Fr. Bob’s involvement did not end with the task force. The Atonement Friar realized that many people coming to 12-step Program alcohol and drug recovery retreats at Graymoor or seeking treatment at St. Christopher’s Inn, a ministry of the friars, were HIV positive or suffering from AIDs. As the spiritual director for the HIV support group, meeting at Graymoor since 1988, he has facilitated the Do Not Fear to Hope meeting that meets regularly.

The PCSN, chaired by Patricia Sheehy, is an educational program of Cornell Cooperative Extension of Putnam County.

The Franciscan Friars of the Atonement are a Roman Catholic order of brothers and priests founded in 1898 by Fr. Paul Wattson, SA, at Graymoor in Garrison.

Photo courtesy of Franciscan Friars of the Atonement