More than just a physical delineation, Haldane’s new “Makerspace and Learning Lab” embodies changes the school’s administration is already implementing to better prepare young people to enter the brave new world of the workforce 15 or 20 years from now.

Funded by a grant from the Haldane School Foundation, the rededicated second-floor classroom in the center of the elementary/middle school building had its official opening Wednesday, Oct. 22, in a ceremony attended by many of the parents, staff and others in the community instrumental to its development and execution. 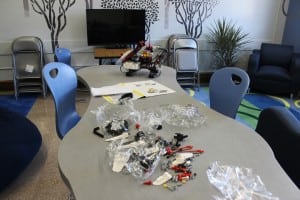 A wavy-edged table, constructed and donated by Scanga Woodworks, is as fluid as the activities on it.

A few days prior to the opening, Elementary/Middle School Principal Brent Harrington spoke of the new direction for the school, one which he spearheaded.

“This was pitched to the Haldane School Foundation as more than just a room, but as something intended to serve as a model redefining our approach to learning,” Harrington said. “Most importantly, there is no ‘front’ of the room, but rather lots of clusters — areas to facilitate student collaboration and creativity, with a particular emphasis on multimedia and STEM [the now commonly-used acronym for Science, Technology, Engineering and Math]. Certain resources were essential to the room, but it’s more about how we’re approaching those resources.”

A quote from John Dewey, “If we teach today’s students as we taught yesterday’s, we rob them of tomorrow,” is painted prominently on a wall along with several others. The words “set the tone for the room,” according to Harrington. “We recognize that the didactic, teacher-directed model is no longer sufficient for teachers — the traditional desk setup with teachers at the front is still more or less in place, but here we now have a model classroom to foster a new approach.”

With space always at a premium on Haldane’s small campus, the room only became available when the “bubble” class (a fourth section of what is now the fourth grade) was eliminated after budget cuts last year. In a domino effect, that freed up space for some special education and speech and language classes that had previously been located where the Makerspace is now, and what was formerly a divided room was opened out and completely redesigned, with much thought given to each component, from the color of the paint used on the walls to everything filling it.

Teachers were asked to envision “model classrooms” that might work best for them, and some of their designs are currently posted on a wall, providing a comparison to the final design. Two local parents, architect Pam Gunther and designer Chrissy Bernstein, each with much experience in creating these spaces, began the process, including the recruitment of many other volunteers necessary to bring the project to fruition.

“Chrissy and Pam have captured the idea that design matters — there was thought and care given to every component of this: sitting, standing, should chairs be rolling … everything,” Harrington noted, taking care to mention the contribution of local business Scanga Woodworking, which constructed and donated the main curved table that sits in the middle of the space, along with a number of additional four-seater café tables in the room. The Haldane Elementary and Middle School Improvement Team (ESIT and MSIT) committees have been tasked with working through the details of the logistics of day-to-day use, expectations and access.

Because the room lacks a permanent staff supervisor, it is currently used by teachers for particular projects for whole classes, and by small groups of students in clubs such as robotics and technology, along with a club advisor. Harrington said the eventual goal is to have it open throughout the day so that “clusters of students can come in and out, fluidly … We hope to balance the ‘just being in the space to be creative’ type of student access with teacher lesson times.”

Harrington and the teaching staff also hope to identify community resources that might dovetail well with the space, and invite them in. He mentioned the surfeit of documentary filmmakers and editors in the community and hoped that some could come in to work with students interested in the field.

Creating the Makerspace will be an ongoing process. “We’ll always be thinking about what additions we can make, what we’re still missing, and by its nature, it will always be evolving,” said Harrington. Currently there are materials for Lego creations; littleBits, an electronic circuitry building system; Mindstorm sets; and computers equipped with all sorts of media and programming software, including Scratch, tablets, iPads, and soon an Apple TV, a green screen and, hopefully, a 3-D printer, which is on the wish list.

Harrington noted that Haldane’s new superintendent, Dr. Diana Bowers, “really encourages project-based learning (PBL). We had targeted professional development held in this space specifically to implement a PBL unit.” And the projects don’t necessarily have to be collaborative; students can work independently as well. But Harrington emphasized that “in our world now, collaboration is a skill that needs to be taught. We know that students will need to solve complex problems, in collaboration. It’s a different paradigm from when we were in school. Twenty years ago our information came from the classroom teacher. Now the information is at all of our fingertips, but students have to learn, ‘What do you do with it?’ ”