Football class D sectional on Nov. 8 at Mahopac against Tuckahoe

Varsity Volleyball made quick work of Seward at Croton High School on Tuesday, Nov. 4, to grab the class D regional semifinal yet again. With a dozen sectional titles, Haldane kept it fresh this game by defeating Seward in under an hour, giving up only 30 points: 25-9, 25-9, 25-12. Assistant Coach Ashley Anderson guided the team since Coach Melissa Rossano had just given birth to baby Ryan on Monday, Nov. 3. Haldane aced 18 serves, half of those by Marissa DiPalo. The Lady Blue Devils travel to Suffolk Community College to take on Shelter Island at 4 p.m. on Saturday, Nov. 8, for the regional championship. 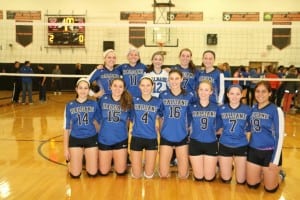 The girls took their 12th class D sectional championship on Nov. 1 at Croton High School against Keio Academy. Keio is known for its fans’ unrelenting enthusiasm, and this seemed to rattle Haldane in the second game following a 25-13 first game win. Keio pulled ahead in the second game until Kelly Vahos served up 5 points and four kills for the win, 25-20, and then 12 consecutive points for a 25-16 win in the third game.

Girls Varsity Soccer battled it out Nov. 4 at Arlington High School against Rhinebeck to win the class C regional final for the fourth time, 6-3. At the half, Haldane led 4-0 with Marina Martin’s hat trick (three in a row) and one more by Allie Monteleone. Blue Devil fans were making plans to attend states as Tobey Kane-Seitz scored the fifth goal for Haldane, but Rhinebeck had come back to the field strong, accomplishing three goals before Martin put an end to their run for the last goal of the game with 18 minutes left. Keeper Sara Labriola defended with five saves. 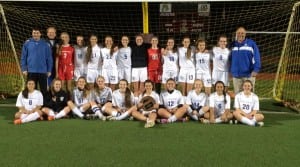 Coach Gary Van Asselt explained his coaching philosophy: “On the first day of practice you control the effort and prepare to make yourself a better soccer player. That goes for anything you do in life. You get out what you put in. It shows daily as they grow together as a team. You have to work a little harder and want it more. It comes down to heart.” The girls will travel to Cortlandt on Nov. 15 for the state final four.

Varsity Cross-Country won the class D sectional finals at Bowdoin Park on Saturday, Nov. 1, the boys for the seventh consecutive year and the girls for the third.

The boys were led by Nick Farrell, first overall with a time of 18:21, then Brian Haines and Adam Silhavy for the top three spots. Silhavy, the only eighth-grader on varsity, was in a rundown in the final 200 yards and edged out a runner from Keio by 2 seconds. Finishing fifth overall and fourth for the Blue Devils was Andrew Gannon, then Eric Rizzi for fifth, Peter Duffy for sixth and Jake Howell in seventh. 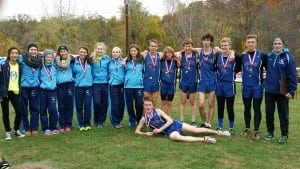 The girls were led by section 1 individual champion Ruby McEwen with a time of 21:48. McEwen was also the individual champion in 2013. Haldane swept the first six spots with Kate Phillips in next and Taylor Farrell for third. Abbey Stowell was fourth, Wylie Thornquist fifth and Samantha Ricketts sixth. Julia Olsen finished seventh for the Blue Devils.

The team will represent section 1 at the state championships this weekend in Canton, 30 miles from the Canadian border, prompting one parent to quip, “They will bring their passports in case they overshoot the finish line.”

Good luck to our Blue Devils; whether we are at home or in the bleachers, we’re cheering for you.

One thought on “Three Sectional Wins for Blue Devils”