In 2003, David Maraniss, a Pulitzer Prize–winning Washington Post journalist, published They Marched Into Sunlight, a book about two events, a battle during the Vietnam War in October 1967 and a protest against the war going on at the same time in the U.S. 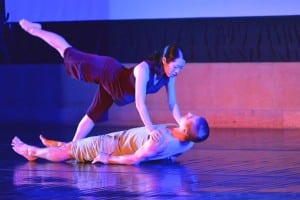 A scene from the performance (photo by Maj. Harry Jones)

Robin Becker, choreographer for her eponymous Manhattan-based dance company, read the book and then created a dance work representing her appreciation of the book’s themes.

On Friday, Nov. 7, the author, the choreographer and dancers appeared at the U.S. Military Academy (USMA) as part of the school’s creative arts project to present their collaboration and speak to an audience of cadets, active-serving military and visiting civilians.

“We scheduled this event to be close to Veterans Day so we can reflect on the countless sacrifices made by men and women in uniform to protect our freedom, among them the freedom of expression,” said Col. Scott Krawczyk, head of the USMA’s English and Philosophy Department. Krawczyk pointed out that American arts, including the dance world, have increasingly embraced military themes.

“We are grateful to those telling stories of sacrifice and courage, of heartbreak and loss and the bonds that unite us across boundaries, across cultures and across time,” he said.

The colonel also compared the dancer’s training, discipline and practice to the military and sports experience so familiar to his audience.

Maraniss said that when the book was first published soldiers were “fighting and dying in a place where they didn’t know the language or the culture.” He also said at the time the country was debating the war and the role of dissent. He allowed the parallels between Iraq and Vietnam to hang in the air.

Becker made a comparison between the military and artistic call to be of service to the country. As an artist she said she was seeking to explore “the deepest expression of human life so we can find our bonds and our commonality.” Referring to her body as her main artistic tool, she said, “I am profoundly aware of both the power and the fragility of the human body.”

The dance work presented, which was only part of a larger work Becker said would not fit on the stage in Robinson auditorium, included video clips and recorded music. The different dances movingly depicted moments, such as a lover’s longing for her dead soldier, the chaos of battle and protest and the contradictions of duty and fear.

Many members of the audience expressed heartfelt enthusiasm for the work in general and for particular scenes that personally affected them.