Those who yearn for the long-gone “Main Street” tradition of personalized service from shops that do mainly one thing and do it well, have cause to be excited with the imminent opening of such an establishment, Barb’s Butchery — the name tells most of the story — in Beacon. The only stand-alone meat specialist for many miles is in the midst of a soft opening, as provisions are stocked and the store gets up and running, with the grand opening expected to take place on Dec. 2. 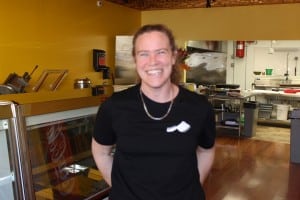 Barb Fisher, happy to get things started at Barb’s Butchery

Soon, this area will have access to not only the expected cuts of beef, pork and lamb, but also homemade luncheon meats, prepared foods, multiple varieties of sausages, an array of smoked goods (there’s a smoker on the premises) and esoteric enticements for carnivores in the form of specials like french fries made with duck fat and truffle salt.

Plus, there will be classes and, eventually, even Second Saturday, three-course meals highlighting the meats. Also on tap: chicken, duck and rabbit, plus old-school comfort side dishes like deviled ham, baked beans with pork belly and brown sugar, and fryer items like deep-fried chicken and falafel. (There are two fryers, one of which will be strictly vegetarian.)

Those who might envision a portly, ruddy-faced man in a large white apron who has spent his life navigating freezer compartments will be surprised at the 21st-century’s personification of the trade: Barb Fisher, an energetic, mind-always-racing mother of two small girls who, until very recently, was a math professor, with multiple degrees in fields including computer science and physics.

Fisher, who grew up in Detroit, spent time in Kentucky and Pennsylvania before moving to New York City, led there by a fellowship from Math for America. She taught that subject for five years at a high school in the South Bronx. In 2006, she and her husband relocated to Beacon, and she became a math professor at SUNY Orange.

Soon to be filled: display cases at Barb’s Butchery

During her second pregnancy, she had those “I want something different” feelings about her professional life. “I wanted to invest in ‘Main Street’ — not literally, but in a ‘Main Street’ style; and I kept thinking about what I could open that might actually be of use to the people who lived here,” she reflected. Having spent a lot of time talking with Beacon friends about how there should be a butcher shop in Beacon, she made the pronouncement, “I should do this myself.”

A farmer connected her with Mark Elia, proprietor of Elia’s Catering Company and House of Sausage, in Highland. They hit it off, and Elia has since become a mentor to Fisher. He began with knife skills and has wound up also advising on equipment and the myriad of other components that go into opening a business. Handily, Fisher’s math and physics acumen has served her in unusual ways, from formulating equations to use in pricing things fairly to comprehending the chemistry involved in meat processing.

Deciding upon a large space with a lengthy retailing history at 69 Spring St., Fisher has spent the better part of a year giving the space a gut renovation. Now the light-filled front room is brightly painted, a welcome backdrop for the large display cases waiting to be filled with meat.

That meat will be brought in from local farms within a range of about 500 miles. Fisher notes there are about 140 such farms that will “bring me animals raised to the specifications I’m interested in. This means no feedlots.” The farms used will rotate based on supply and need, and each will produce an affidavit that spells out how they are raising their livestock. The Barb’s Butchery website will post updates on which farms have supplied the current stock.

Included in those potential farms is Glynwood, in Philipstown, which Fisher hopes to work with. Fisher would especially like to feature their goat, which she called “practically an indigenous meat to the Hudson Valley.” She said the Glynwood staff is an “amazing resource — they have been super helpful.”

Fisher said she can now “look at meat and know if it was slaughtered well. You can tell by the meat what sort of happened to it … there are certain colors which indicate unsettled adrenaline, where the animals were more fearful.”

Fisher noted that all cows are grass-fed for the first six months of their lives, as they are unable to process anything else. “With the big production companies, cows end up in feedlots, and those feedlots have different requirements for nutrition and often feed them things which artificially fatten them,” she explained.

As for the current attraction to Angus, Heritage, Wagyu and other such names, Fisher pointed out that these are breeds, and she is not focused on any particular breed but instead will be making her choices based on farming practices. “I’m very interested in maintaining quality. I’m looking for particular marbling and sometimes it will be one breed, sometimes another,” she said. There’ll also be uncommon cuts of meats on hand, some lower-priced so that the shop is accessible to the whole community — things like mutton and top cuts.

Now through Dec. 2, Barb’s is open with limited stock, which is moving rapidly: they went through three sides of pork and 300 pounds of beef in just three days. Hours are Tuesday through Friday from 4 to 7 p.m., and Saturdays from 12:30 to 3:30 p.m. There has been a conscious decision not to stock turkeys for Thanksgiving this year. Orders are, however, already being taken for Christmas-time holiday meals: prime rib, lamb and smoked hams.

After Dec. 2 the hours will be 11 a.m. to 7:30 p.m. Tuesday through Friday and 10 a.m. to 6 p.m. on Saturdays. Internet ordering will allow customers to place orders at any time, including during train commutes home, for quick pickup.

For more information, visit barbsbutchery.com, call 845-831-8050 or just stop by most afternoons.