The Trial of Goldilocks runs Dec. 5, 6 and 7. The trial unfolds to uncover the truth of what happened at the Bear Family’s house that fateful day, with Josephine Russell in the title role and Maya Gelber, Zach Shannon and Lorelei McCarthy as the bears. Questioning led by District Attorney Muffinhead (Andrew Nachamkin) and Prosecutor Wombat (Maia Keller) will uncover the facts presented by the witnesses: an expert scientist (Hannah Benson), the lead investigator, Detective Sergeant Clorox (Fiona Shanahan), the Pig Who Was Not Eaten by the Wolf (Kat Buslovich) and character witness for the defendant, Merlin the Wolf (Sam Bates), and Bambi Deer (April Rose Ransom). 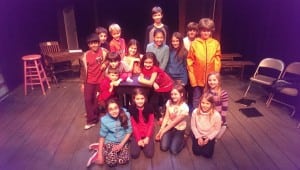 The cast for The Trial of Goldilocks

With the help of her goofy and loveable bailiff (Charlie Keegan) and romantic novelist-cum-court reporter (Daniel Phillips), not to mention the unfocused jury members (Alex Danilov, Raunaq Kapoor, Kieran Warger and Grace Vogel), the judge (Sofia Wallis) will have a hard time getting to the truth of the crime and delivering her sentence.

In The Trial of the Big Bad Wolf on Dec. 12, 13 and 14, another group of fourth- through eighth-graders gets to portray some favorite fairytale and nursery rhyme characters. In a script written by Joseph Robinette, the Three Little Pigs (Abigail Platt, Andrew Nachamkin and Anastasia Coope), and the Big Bad Wolf (Anneke Chan) get to tell their side of the story in the courtroom of Wise O. Al (Noah Bingham). 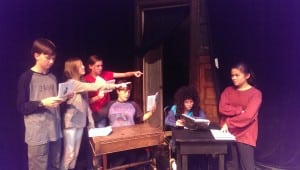 In rehearsal for The Trial of the Big Bad Wolf

Led by the court clerk (Aurora McKee), the jury helps the pigs and wolf recount their tales. The reporter (Mazzie Maxwell), newscaster (Edward Bauer) and town crier (Joia McKelvey) stretch the truth in their reports, adding to the hijinks. The jury is made up of fairytale characters played by John Vogel, Gabriel Berger, Anna Rowe, Chloe Rowe, Kate Meisner, Jude Columb, May Columb, Nickolas Meisner, Lola Ritell and Erica Bauer.