A suddenly opened slot at the Philipstown Depot Theatre just before the holidays led to an exchange between Christine Bokhour and her World’s End Theater (WET) colleague Greg Miller, of the “Would you consider acting in A Christmas Carol?” and “How about you direct?” variety. Voilà, a show was born, and the results of that exchange, a one-man, 30-character Bokhour- and Miller-penned adaptation of the Dickens classic, will inhabit the stage there from Dec. 18 through 21.

Mining the riches of the source material, Bokhour and Miller were determined to use the original text, keeping Dickens’ syntax and vocabulary, with no re-phrasing. Though they have moved sections around and otherwise edited to conform to a 90-minute time frame, they have not used Dickens’ own condensed adaptation, which eliminated portions of the story and characters they wished to preserve.

“It was written to be read aloud,” Miller noted, “so in a sense, one-man versions are truer to the text than bigger shows with many actors.”

Both Miller and Bokhour wanted to place the emphasis on the darker doings of the piece. “It’s a scary story,” Miller said, “and in order for the redemption to be full blown, you have to have gone to a dark place.”

Bokhour added: “Instead of the sitting-by-the-fireside-spinning-a-yarn approach, we’re heightening the spook, and we’re doing this with movement and vocal work. What people can do in their minds can be so much scarier than a contrived effect. People will be more scared being washed over by words. We’re taking the oral tradition and raising the theatricality, using Greg’s great vocal ability.” 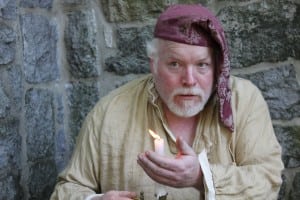 Greg Miller, in one of his 30 roles, in ”A Christmas Carol” at the Depot Theatre (photo by Greg Gunder)

The character differentiation is not all in “the voice” as a whole, but instead is composed of gradations in “posture, inflection, cadence, speed and dialect,” according to Miller. “Part of the fun of it is trying to find what each character is about — what they want … there’s such a rich array.”

Asked what they feel makes Christmas Carol such a perennial, Miller was quick to reply: “It’s the Christ story. Scrooge begins as a creature who covets. At the end he is redeemed. To get to that place he has to go on this journey that involves the death of a small child. A sacrifice that allows him to embrace the light. That’s the basis of the stories we tell.”

Bokhour described it as being about opportunity. “After he is gifted with the opportunity to see the world, Scrooge embraces it. He wakes up in the morning from what is a bad dream and embraces his own propensity for love and joy and happiness.”

Both Bokhour and Miller come from small towns — Miller’s is Tryon, North Carolina, and Bokhour’s is Conneaut, Ohio. Both arrived in New York City in pursuit of theatrical careers. Although Miller intended to become a teacher, an early stage turn as Captain Hook altered that path. Majoring in dramatic arts at University of North Carolina at Chapel Hill, he worked his way through it as a chef, and, after graduation, wound up as an executive chef at a large hotel.

“That was way more job than I wanted, and it proved to be what moved me out to New York to try to earn a living as an actor,” he said. By then married to his wife Lynn and with a baby son, Jack, Miller made the move, solo, Lynn and Jack following a year later. Mixing paid work doing graphics for investment banks with off- and off-off-Broadway acting jobs was tough going, but he kept at it, moving to Cold Spring in 2004. Just four years later, Miller was laid off, one of the early casualties of the financial downturn.

The Millers decided to reinvent themselves. Lynn had a background in the food industry, and they asked themselves, “What can we do that might be fun, viable, and grow-able?” Arriving at the idea of fruit pops after much testing and research, they introduced Go-Go Pops in both a Main Street store and at nearby farmers markets. They’re still at it, doing some wholesaling while maintaining the Main Street storefront, and still selling at farmers markets, albeit honing it down to the largest ones. (At one crazy point, they were doing 12 of them each week.) 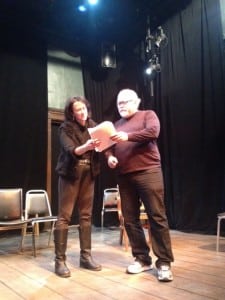 Miller said that his acting career benefited from his financial industry career’s upending: “Getting free of that was as important as being my own manager of my time. Since then I have more opportunities to pursue acting work, and there’s been a lot of growth.”

Not only has Miller done the requisite trifecta of locally filmed Law and Order shows (playing “white collar and blue collar: a garbageman and a judge and several times a prison warden — once I oversaw an execution!”), his voice has been booming, so to speak. “Anyone who watches sports has heard me,” he said, naming spots for Auto Trader, Burger King, McDonalds, Xbox and AT&T that he has intoned. He has also been seen on The Americans, Alpha House and Unforgettable.

When asked, “What’s your backup plan, doing theater?” Bokhour said her thoughts were always, “What are you talking about?” At Western Kentucky University, she studied both dance and theater then moved to St. Louis and “exhausted the market there. Finally, I realized I had to get to New York. I had five bucks in my pocket, arrived to a foot of snow, and thought, ‘What have I done?’” she recalled. She ping-ponged in and out of the city, touring as a dancer around the country, doing a stint as a Rockette and teaching before landing long-term gigs in tours of Cats and Chicago and before the call came saying the magic phrase, “We want you on Broadway [in Chicago].”

What struck Bokhour, after finally achieving that dream, was that it wound up feeling like “another night, another show. That experience made me realize that the important part of performance is not that it’s ‘on Broadway’ but the connection you make to the art and to the audience, and you can do that in all kinds of ways and places. Part of that was maturity and part was that I was able to achieve part of my dream.”

During those years as a dancer, Bokhour often sought out massage and acupuncture treatments. “One day my brain said, ‘Go to acupuncture school,’ ” she recalled. Always interested in science throughout high school and college, she took long-distance classes while on tour and then realized that Chinese medicine “integrated so many parts of me. The practice also expanded my capacity as an actress, since in both I’m looking at how people connect with everything; they are incredibly related.”

Since moving with her husband and young daughter to Cold Spring, which they discovered visiting friends, Bokhour has established a practice here and continues to maintain one in the city, spending two days in each, while becoming increasingly involved in local theater here.

A Christmas Carol, which also features lighting design by Donald Kimmel, sound effects by Lisa Sabin and costumes by Charlotte Palmer-Lane, will be performed on Dec. 18 at 7 p.m.; Dec. 19 at 8 p.m.; Dec. 20 at 4 and 8 p.m. and Dec. 21 at 7 p.m. Tickets can be purchased through brownpapertickets.com. Miller and Bokhour said that, because of the spooky content, although it is dependent on the child, it might be best suited for ages 7 and up.