Forum addresses its impact on the Hudson River

As strange as it sounds, the information was dire but the panelists expressed optimism at the Desmond-Fish Library Talk “The Hudson River and Climate Change” Tuesday, Nov. 25. The free event was jointly presented by the Desmond-Fish Library and the Garrison Union Free School and featured a well-organized three-part program with five local experts facilitated by library trustee Fred Osborn. 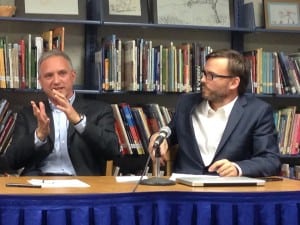 Sacha Spector and Radley Horton discuss the impact of climate change on the Hudson River Nov. 25 at the Garrison School. (Photo by P. Doan)

Dr. Radley Horton, Garrison resident and a climate scientist with the Center for Climate Systems Research at Columbia University, opened the discussion with a presentation on how greenhouse gases function to keep the atmosphere on our planet livable and the effect that we’ve created by burning fossil fuels and releasing an inordinate amount of carbon. These gases work by trapping heat and as we’ve added more and more carbon, creating a feedback loop for all life on Earth.

Horton stated that the global temperature has risen 1 ½ degrees since the Industrial Revolution, when we started burning fossil fuels. He said: “What sounds like a small amount of warming has already had a big effect not just on our climate system, but on our agriculture ecosystems. We’ve seen loss of land-based ice in Greenland, Antarctica and glaciers; warming of the upper oceans; changes in coral reefs; and increasing frequency of temperature extremes. In the U.S. over the past decade we’ve had twice as many record-breaking high temperatures as there were record-breaking cold temperatures set. A small shift has had a big impact on types of extremes.”

As an example of these extremes, last winter felt unusually cold to us here in the Northeast, but globally, it was the warmest on record. These extreme temperatures affect temperatures in specific parts of the world differently.

Bringing the conversation to the local level, Horton said that our average temperatures are two degrees warmer in New York over the last century. His group’s projections for us through 2050 anticipate anywhere from 3 to 6 degrees of warming in the worst-case scenario. Horton said: “If we see that type of warming, we can count on much more frequent extreme events. Heat waves, at minimum, would double in frequency, not just more days over 90, but the nights are warmer and the heat waves are longer lasting.”

When it comes to the Hudson River, the main subject of the discussion, the chief impact will be sea-level rise. Within the next 30 to 40 years, the river level is expected to rise at least 7 inches to 1 foot in the best-case scenario. In the worst-case scenario, it’s projected to be 6 feet higher by 2080. Horton said: “The bottom line is that even if we luck out and get the best-case scenario, it would double the incidences of coastal flooding we’ve had in the past. We don’t need Superstorm Sandys, just the regular type of storms we’ve had in the past to get this.”

The infrastructure and life on the Hudson will be dramatically impacted and the message from all participants is that we need to plan now and we need to act now.

Sacha Spector, the director of conservation science at Scenic Hudson, talked in more depth about the factors affecting the Hudson River from global warming. Over a century, the river rose about a foot. However, in just the last 19 years the average is more than twice what it was in the past 150 years, and in the past five years, it’s been about five times as fast.

To understand what contributes to rising sea levels, Spector explained that water expands as it gets warmer, and all the water bodies on earth are warming. Melting land ice, terrestrial water that we pump out of the ground and then into the sea, changes in ocean currents, and sinking land are all contributing factors to the changing river level.

Next week’s Roots and Shoots will continue the discussion of climate change and the Hudson River with more about ways to mitigate and adapt to the changes.