Lest anyone presume that someone growing up in a very rural area might have a childhood spent searching for “things to do,” they should consider Brandon Ballengée. Ballengée, who grew up amidst 20 acres of forest, ponds and streams in the Ohio countryside, drew from those surrounds an abiding interest in them — and that interest took hold in a variety of ways, scientific and artistic.

Fusing the two together has been his life’s work, and an exhibit highlighting this fusion, Ghosts of the Gulf, focuses on Ballengée’s images of marine species gathered in the Gulf of Mexico following the environmentally ruinous 2010 Deep Water Horizon oil spill there. These specific images are also emblematic of the general diminishment of numerous species globally.

The exhibit, which opened in November, runs through March 8, and Ballengée will give an artist’s talk at the institute this Saturday, Dec. 13, at 5 p.m.; a reception follows.

My transdisciplinary practice has bridged primary scientific studies with ecological art and engaged environmental stewardship. Underlying my practice is a systemic methodology, which posits art practice as a means of realizing research science, and vice versa. Inherent to this working method is an impetus for ‘ecosystem activism’ implemented through participatory biology field investigations and laboratory programs that stress public involvement — my attempt at social sculpting. My artworks come from direct experiences with amphibians, birds, fish and insect species found in today’s preternatural ecosystems and those observed in post-natural laboratory settings. The art itself is made from diverse mediums … all of these try to re-examine the context of the art object from a static form (implying rationality and control) into a more organic structure reflecting the inherent chaos found within evolutionary processes, biological systems and nature herself.

With a string of degrees in both fine arts and biological science, Ballengée recalled that he “always wanted to do both … I had a painting studio in my parents’ barn, growing up, and they also let me have dozens of aquariums and eventually build a wet lab.” He would bring frogs, fish and amphibians in, study them, let them go and get more. Though his initial degree was in fine arts — he said it was “tricky to figure out how to do it professionally” — he found a master’s program that let him combine both. 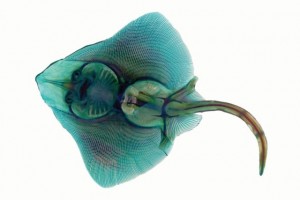 Today, as in recent years, he divides his time between fieldwork, largely working with amphibians in temperate wetlands (access to which is limited by climate to a little less than half the year); lab work analyzing his findings; artwork, as an eco-artist, documenting and highlighting the specimens and the conclusions he has drawn from them; and teaching — he is a professor in various departments, fine arts (including a course on eco-arts), humanities and sciences, at the School of Visual Arts in New York City.

Throughout he has focused on ecology and how “citizen science” can aid ecological research. “At any given moment I’m working on a dozen or so projects. Science-wise it’s a good thing I’m working in a temperate environment, which gives me five months available to be out there and the rest of the year to use the data. There’s a lot of downtime doing amphibians in temperate climates.” Generally Ballengée spends two days a week looking at data and two more on making the imagery. 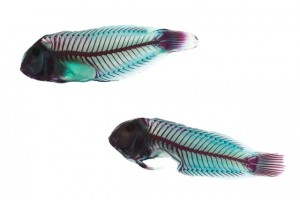 His CV describes his artworks as “transdisciplinary, inspired by ecological field and lab research” and describes his “central investigative focus on the occurrence of developmental deformities and population decline among amphibians.”

Drawn particularly to amphibians by the startling statistics on their decline, Ballengée noted that there is a “41 percent decline in populations” of certain species. “The thinking is that this decline happened relatively recently. I want to do whatever I can to make people aware of this — that’s the underlying goal.”

The fieldwork fuels the art, and vice versa. Ballengée cites as an example work he did last spring, in the Netherlands, at site, where many deformed frogs were found. “The question becomes how do you take that and make it into a work of art?” 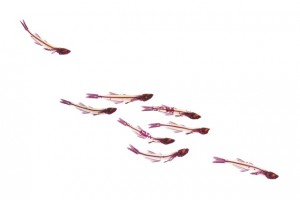 When Ballengée exhibits his work, he no longer puts, as he once did, lengthy descriptions of the background and data next to each piece. He has come to realize that people are not always ready to absorb it while they are looking at the work.

“I try to leave all the work open to interpretation, but I’m always hopeful that people will have an engaged response, that they will want to learn more,” Ballengée said, adding that he finds “people get engaged by visuals, and then later they are stimulated to learn more.” Ballengée tries to incorporate activities, such as field trips, in conjunction with or soon after an exhibit, that bring people out to collect data and make real world observations and just partake of the experience of the wetlands. He tries to make materials available at galleries’ front desks and/or provide online reference material that “saves didactic material from being on display.”

In writing about Ballengée’s work on her ecoartspace blog, curator Amy Lipton, who organized the show, said Ballengée’s work as a biologist “looks at amphibians as bio-indicator species, particularly their development in complex ecosystems and the proximate causes for developmental deformities among wild populations … Though the Gulf of Mexico species depicted in Ghosts of the Gulf do not appear to show deformities, Ballengée hypothesizes as to why: ‘The subjects in Ghosts were found shortly after the spill so do not have any obvious morphological abnormalities, however we don’t know what the long-term impacts of the spill yet will be, on these species or even our own.’ These images of species once common to the Gulf represent a creative process that blurs the lines between art and biology. Ballengée’s specimen-subjects transition from their once living state to brightly colored x-rays revealing the complex architectural anatomy of these beautiful and vanishing species.” 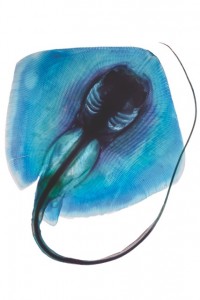 The images are made by injecting dead specimens with red and blue dyes and then scanning them using a high-resolution scanner — which brings forward the intricate details of the internal anatomy of each subject, making them transparent, yet mysterious, concurrently.

In his Beacon Institute talk, Ballengée plans on providing a brief introduction into what his practice is and how all the work he has done ties into the challenges faced by the Hudson. He’ll be invoking the spill in the Gulf of Mexico insofar as the parallels between it and other aquatic ecosystems are many. He’ll also touch upon ongoing bodies of work dealing with the Hudson and what people should be aware of and working toward in terms of remediation.

The Beacon Institute is located at 199 Main St. in Beacon. For more information, visit BrandonBallengee.com and bire.org.