Cold Spring needs a place to leave leaves. At least that’s the word from a master-gardening student whose research prompted a proposal for the village government to team up with the Town of Philipstown and use the latter’s old landfill for dumping and composting leaves collected from village yards and streets.

Philipstown’s Town Board learned of the idea in a presentation by village resident Richard Franco at its formal monthly meeting Thursday (Dec. 4). The town government operates the landfill (no longer used for trash disposal) as a recycling area, located off Lane Gate Road just outside Cold Spring and Nelsonville.

The board took no immediate action on Franco’s proposal.

In other business, the supervisor and four councilors accepted the offer of $285,000 by Philipstown resident Kim Conner for the VFW building on Kemble Avenue, a town-owned property that the Town Board had tried for several months to sell. Conner, a member of the Philipstown Planning Board, said after the meeting that when no other buyer emerged, she decided to buy the building, where the Planning Board once met.

For years, the Village of Cold Spring has unloaded leaves on an empty village-owned lot at the end of Benedict Road. However, Franco explained, “that place has pretty much reached its capacity, and they’re looking for an alternate spot.” 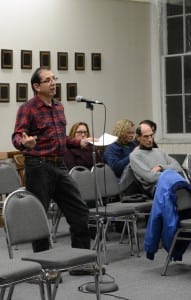 Likewise, he said, the village is interested in composting its leaves and similar yard waste but no suitable land exists within village limits. “So,” he wondered, “is the landfill a potential” location? He estimated that the village gathers about 500 cubic yards of leaves annually.“What we’re talking about is Cold Spring leaves because that’s where we’ve got the need. This would certainly help the village out. Next fall they’re going to start collecting [again]. They don’t have any place to put it.”

Franco became aware of the situation when, in his gardening coursework, he looked at how local governments handle leaves and composting. He said Cold Spring Highway Foreman Ed Trimble and Philipstown Highway Superintendent Roger Chirico had discussed the landfill as a leaf-disposal/composting venue but encountered sticking points, such as access to the site by Cold Spring personnel. He also said that composting probably wouldn’t generate revenue and thus the town government might incur a small overhead cost for its participation.

He said composting leaf and similar yard waste results in “a 6-to-1 reduction in volume” and that Beacon has been composting leaves for about 20 years. Beacon initially sold the composted material, but it was in such demand at $10 a ton that trucks lined up to get it and caused traffic congestion. Now, he said, Beacon simply gives the composted material to residents.

Philipstown Supervisor Richard Shea seemed surprised by Cold Spring’s apparent problem and the circuitous appeal to the town. “The village has not approached us at all about this if they have this pressing need,” he said. 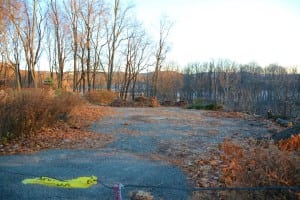 To dispose of collected leaves, Cold Spring uses an empty lot at the end of Benedict Road.

From the audience Cold Spring Trustee Stephanie Hawkins confirmed that Trimble and Chirico had been talking and said “it’s something we need to defer on to highway [officials].” Hawkins also pointed out that she, Mayor Ralph Falloon and presumably the entire Village Board would support “any collaboration that works for both parties.”

“Ultimately, that would be a Town Board decision,” not something merely agreed upon by the highway department officials, Shea responded. And so far, he reiterated, “we haven’t heard anything” directly from the village government.

Turning to the VFW sale, Shea announced that “we do have a bid. That’s good news,” although it means that the town’s Office for the Aging (or Senior Resources), for which Putnam County pays rent on the VFW, must move. A senior citizens outreach coordinator works out of the space now. Shea suggested that the town could find him temporary quarters at the Philipstown Recreation Center in Garrison, although long-term the coordinator “has to stay in the village.” 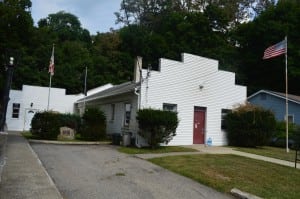 The Town Board received an offer on the VFW on Kemble Avenue (file photo).

Town Planning Board Chairman Anthony Merante, a former Nelsonville trustee, remarked that the Village of Nelsonville might have space in its Village Hall complex to accommodate the outreach effort — a suggestion that drew favorable reactions from Town Board members.

At a Town Board workshop Dec. 10, Shea explained that the building had yet not changed hands, since as of that date 24 days remained in the window of opportunity for someone to mount a challenge to the sale by seeking a “permissive referendum” on it. “It is not sold yet, but we anticipate the sale of the VFW,” he said.

After the Dec. 4 meeting, Conner said she has no firm plans for the VFW. “I have to figure out what I can do” in terms of zoning and other considerations, she said. She observed that, equipped with kitchen and bathroom facilities, the building might be adaptable as living space and said she doesn’t want to demolish it. “I’m kind of nostalgic about it, actually, [about] the art deco,” she said. “It’s cinder-block art deco.”

The board briefly discussed the proposed leisure housing-cum-horse center Hudson Highlands Reserve, planned for 155 acres off Horton Road. Shea read a formal letter he wrote to the Planning Board, which is handling the town government’s review of the development plans, stating that in his capacity as a private contractor he once had done business with the sponsors. “I will not be working on the project” and will recuse himself should it come before the Town Board for any reason, he declared. “In the interest of full disclosure I wanted” that known publicly.

Councilor Nancy Montgomery recommended the town bring in an expert planner to advise the Planning Board in its scrutiny of the project. Merante answered that arrangements have been made for the town’s planning consultant firm, AKRF, to provide ongoing assistance.