At the top of one of the main pages on Denniston International’s website is a quote from South African novelist Marion Molteno: “No one ever knows if the little we do makes a difference. But we need to do it just the same.”

Putting that statement to work, Danielle Pack McCarthy, the founder of Denniston International, a small, local 501(c)(3) nonprofit, has organized an ongoing toy drive, collecting donated new and gently used toys, games and more and delivering them to children affected by the Ebola epidemic in Liberia and Sierra Leone.

Denniston International (DI) has a mission “to empower underserved children and youth worldwide to live happy lives and contribute to their world.” It approaches that mission in manageable ways, stemming, most often, from getting to know a particular community, be that the community in the town on the island of St. Vincent in which Pack McCarthy served during her two years (1998–2000) in the Peace Corps, or the community of Philipstown, where things — and people — can fall through the cracks as easily as anywhere else.

The community has already responded to Denniston International’s drive for toys for children in Africa affected by the Ebola crisis.

As DI’s site notes, “Our organization tries to ‘do something’ when the feeling of what to do may feel overwhelming.” It’s looking beyond the huge, seemingly impossible-to-solve problems and often getting down to business, relieving some of the pressures that go along with those big-picture issues.

This new initiative began after Pack McCarthy watched a 60 Minutes episode “on the incredible work of International Medical Corps (IMC) in a Liberian Ebola clinic,” she explained. “One of the most heartbreaking images of the piece was a small boy infected with Ebola. He sat in an area for infected patients, being taken care of by his father. And this would happen all day long: sitting there, nothing to play with, nothing to do.”

During the stretches when there isn’t certainty over whether someone is infected or not, they must simply wait. And, for children, this means sitting around in rooms with adult workers all suited up in protective coveralls, with no real chance for connection, even for hugs. “I couldn’t watch that and then just get up and go to bed,” Pack McCarthy said. “They have nothing to latch onto, no trains, no dolls, no objects of comfort. It’s an issue of comfort and comforting.”

Pack McCarthy immediately got going. She began by contacting the International Rescue Committee, with whom she had worked previously. For logistical reasons, they and a number of other aid organizations were unable to implement her idea, but eventually she contacted the agency she had seen on 60 Minutes (IMC) and, after discussions in which Pack McCarthy assured them enough items would be collected, and after IMC vetted Denniston International and its background, they agreed to a combining of efforts — with DI in charge of collecting, packaging and shipping the toys over to IMC field offices in Sierra Leone and Liberia and IMC then taking over to distribute them.

Pack McCarthy described IMC as an “on-the-ground organization; they’re already there in these communities and are working from the ground up, getting to work. They’re totally dedicated and extremely professional and have been active on a longstanding basis,” working to help avert and/or manage health crises such as malaria and AIDS/HIV in various locations around the world.

Pack McCarthy started organizing for this initiative during the second week of November; the various clearances needed have taken up much of the time since then, but now all is set and collecting has begun, with boxes already appearing on her porch. DI is covering the cost of the shipping and IMC is doing the same in devoting its resources to distribute the shipments. The first shipment was scheduled to go out around Dec. 19, to receiving offices in Liberia and Sierra Leone.

Throughout the process, there will be photographic documentation of the journey from here to the actual clinics and other areas of distribution, so donors and their families will be able to see the results of the contributions.

DI is seeking toys new or gently used (the guide to gently used being “I want to be proud of what I’m sending,” per Pack McCarthy), toys including cars, trucks, building blocks, Duplo-type Legos, crayons and markers, complete boxed games (like checkers, Chinese checkers, Connect 4, dominoes and chess sets), children’s books in English, picture books and gently used magazines for both children and adults.

Financial donations, earmarked for shipping costs, can be made through the DI website. Donations can be made during regular business hours at boxes at Butterfield Library, Haldane High School, where the Student Council and the Model UN class have done some organizing, and through Living Yoga Studios in Philipstown Square on Route 9; a free yoga class there is offered to anyone making a donation.

Pack McCarthy calls the spirit of the community “exceptional — people just want to help; they’re often looking for a personal connection to a cause.” Perhaps it is simply giving back, for DI has directly helped others, over the past few years, in this community. They have focused on small, acute needs, needs they have found out about through “relationship building — getting to know the community.” It is through asides, quiet conversations, that Pack McCarthy has found out where the needs are here.

For example, a coach mentioned that an avid player on his Little League team would be sitting out the season the following year. Follow-up determined that the family couldn’t afford the fees, and DI paid those fees. Another time, someone noted that a Spanish-speaking family had a child who would be attending kindergarten at Haldane in a year, inevitably hampered right off the bat by not speaking any English. DI paid for a year of preschool for that child, where the focus was on language acquisition. 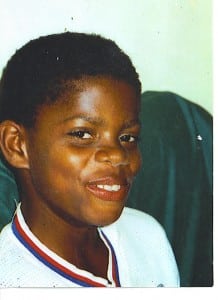 The inspiration for all of this is DI’s namesake, a boy from St. Vincent named Denniston Thomas. Pack McCarthy first met him when “he left mangoes on my porch.” He lived a few houses down from her, and his family had little money. They had no electricity and no sheets on the mattresses laid out on their floor. Denniston, at 11, was always working and giving money to his parents for basics.

“He became a presence on my porch,” Pack McCarthy explained. “I helped him study for the common entrance exam to high school. He studied really hard and he passed.” Close to the end of her Peace Corps assignment there, Pack McCarthy worked with a nearby Catholic school, St. Joseph’s Convent Marriaqua, which she called “a school that prides itself on academic excellence, and has a priority to take in poor children who would not be able to afford an education elsewhere. They accepted him.”

“He was my first, one-on-one sponsored child,” Pack McCarthy explained. After her departure, “we would write letters to each other. I started hearing from him that he wasn’t feeling well, and I asked the principal to check up on him. It turned out that he had fluid in his lungs, and eventually he got well enough to travel to the U.S. for treatment. During my time in the Peace Corps, all my family had visited me and met him, and really took to him, so when he came here, he felt like family. During his first week here he felt OK, but soon it was determined he had leukemia.”

During a year of treatments at Westchester Medical Center, which Pack McCarthy called “a horrible time,” she was amazed by the generosity of those around her, which extended to his passing at age 14. “The costs of the funeral were donated, and the cemetery donated the plot.”

Now, Pack McCarthy wants to continue “what Denniston would want to do.” DI, which she founded in 2003, supports his former school in St. Vincent, where things are changing: “Now school is a right, not just something for people with money. But some parents can afford school fees, but not enough for lunch, or travel. So the principal alerts me and we earmark funds for specific issues.”

The benefits of this charitable work are not just for the recipients. Pack McCarthy has three boys, two elementary-aged and a baby, and the older two understand already that surrendering not just some toys, but finding the good ones and giving those up for someone with greater needs, is what counts.

Donations are ongoing and will be accepted well beyond the holiday season. For more information, visit dennistoninternational.org and internationalmedicalcorps.org.

One thought on “Toy Donation Drive for Children Affected by Ebola”