Although the Southern Dutchess Coalition, an alliance of churches, civic organizations and private individuals that come together to produce “events purposely planned to empower, educate and show glorious diversity in the city of Beacon,” has honored the legacy of Rev. Dr. Martin Luther King Jr. (MLK) for 37 years now, new elements were added just last year to personalize the tributes and continue the tradition with younger members of the community. 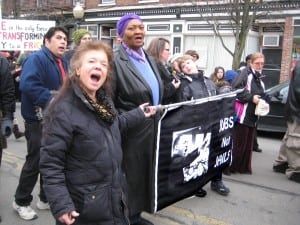 Participants in the 2014 march (file photo by Kate Vikstrom)

Last year the parade came to town, the First Annual King Parade — soon to shift that name to Second — as it will again this year, and it was joined by an essay contest open to all school-aged youth, asking them to think about and then express their thoughts on Dr. King and “the many aspects of his eventful life, as it relates to their life and the world today,” in the form of a statement and question: “The Future Is Ours. What Is Your Destiny?”

From the submissions (which had to have been received no later than 5 p.m. on Friday, Jan. 9), six winners are to be chosen, two each from elementary, middle and high school. These winners will each receive a small monetary award as well as a framed certificate.

Holding a musical parade in Dr. King’s honor was one of the final wishes of an SDC supporter and member, the late Pete Seeger, who died exactly a week after last year’s event, which saw over 700 people in attendance at various events throughout the day. After a morning church session accompanied by a free continental breakfast at 8:30 a.m., lineup for this year’s parade will begin at 9:30 a.m. in front of the Springfield Baptist Church, at 8 Mattie Cooper Square, and the parade itself will follow from 10 to approximately 10:45 a.m.

Springfield Baptist will also host an 11 a.m. youth celebration dinner, an 11:45 a.m. adult celebration dinner and a 1 p.m. celebration service, led by Elder Michael Dandridge, pastor at Faith Temple, and featuring the SDC massed choir, with minister of music John Harris. In between, at noon, the essay contest winners will be announced. 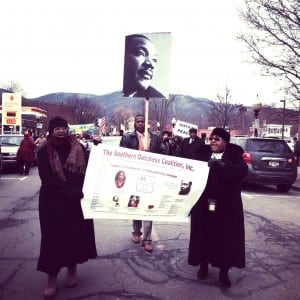 Behind all of these activities, according to SDC, is an emphasis on reflecting on what Beacon, as a community, should do to honor Dr. King’s values and hopes of a better day, things that he fought for up until his untimely death. Referring to last year’s events, the SDC has noted “the success of these new components confirmed the importance of the SDC’s commitment to acknowledge Dr. King’s great sacrifice to spread a word of peace, love, unity and non-violence.”

Volunteers are very much needed for the day: ushers, hosts and hostesses and servers are all requested. There will be a meeting for all volunteers at noon on Saturday, Jan. 17, to go over duties and responsibilities for that day. If interested, potential volunteers should call Sharlene Stout at 845-831-9102 for information.

As the organizers note, “events of the past year from Ferguson, Missouri, to New York City illustrate, race and civil rights issues are vital parts of our lives, not relegated to the South or the ‘civil rights era,’ but central to life in the North and the Northeast today.”

At the Desmond-Fish Library MLK event on Jan. 18, he’ll discuss contemporary episodes that illuminate race issues in our time and our part of the country, including policing in New York City under Mayor David Dinkins versus Mayor Bill de Blasio, and historical episodes in the Northeast he’s written about, such as the mid-20th-century struggle against Jim Crow in Philadelphia.

In addition to his current positions at Connecticut College, Canton served as director of the college’s Center for the Comparative Study of Race and Ethnicity from 2009 to 2012. He holds a master’s degree in black studies from the Ohio State University and a Ph.D. in history from Temple University. His book, Raymond Pace Alexander: A New Negro Lawyer Fights for Civil Rights in Philadelphia, won the 2011 W.E.B. Du Bois Book Prize from the Northeast Black Studies Association.

Canton’s talk will be preceded by a free potluck supper at 6:30 p.m. Bringing food to share is welcome.

At 10:30 a.m. Monday, Jan. 19, the library welcomes actress, singer and storyteller April Armstrong back for their popular MLK Family Program. This year’s program will feature multicultural songs and stories about freedom seekers around the world.

These events are free and open to the public. They are supported by a grant from the Friends of the Desmond-Fish Library. For more information, call 845-424-3020 or visit desmondfishlibrary.org.

On Monday, Jan. 19, at 3 p.m., the Peekskill Area Pastors Association (PAPA) and the Mount Olivet Baptist Church will present a Dr. Martin Luther King Jr. Community Worship Service. The theme of the service is Economic Justice: From a Dream to a Vision.

“In recalling the courage and determination of Dr. King, we will do much to advance the cause of justice and peace not only in Peekskill, but also throughout this country,” a church spokesperson noted.

The event will take place at the Peekskill Middle School, 212 Ringgold St. Members of the community are invited to join civic leaders and faith groups of many denominations to participate in this interfaith service. The MLK Interfaith Adult Choir and the MLK Interfaith Youth Choir will sing, and there will be a presentation of the MLK Community Action Award.

In honor of the commemoration, PAPA is also coordinating six local pulpit exchanges, and members will participate in several service projects throughout the week, including serving the lunch program at the Salvation Army on Wednesday, Jan. 14, at the Peekskill Youth Bureau and the Peekskill Family Resource Center on Friday, Jan. 16.

The MLK commemoration coincides with the global Week of Prayer for Christian Unity, which begins Sunday, Jan. 18. As part of the pulpit-sharing events, Rev. Lee Thompson, pastor of Park Street AME Zion Church in Peekskill, will share his thoughts on Christian Unity and the impact of Dr. King upon the Christian world, in Our Lady of the Atonement Chapel, Graymoor, in Garrison at the 11 a.m. liturgy.