Local activists found sheets helped get out the vote

For several years — or more — political activists in Philipstown assiduously collected turnout sheets available at polling stations on Election Day and used them to get the faithful out to vote.

The sheets were duplicates of the name-by-name sheets election workers compiled as each voter entered the polling place. Typically, an election worker wrote out the master list on lined notebook paper, with “carbon” copying paper beneath. Throughout Election Day, “runners,” the designated representatives of the Democratic and Republican parties, or of non-partisan candidate groups in village elections, would gather the duplicates and determine which of their members had voted. They could then call those who had not, urge them to get to the polls and arrange rides or other assistance if needed.

Of course, no guarantee existed that voters thus reminded cast their ballots for their party’s slate. Moreover, parties in some Putnam County towns apparently did not use the sheets systematically. However, in Philipstown, election by election, political organizations welcomed them as a tool for boosting turnout.

In late 2013, after elections for county and municipal offices, the Putnam County Board of Elections abolished both the master sheets and duplicates. A year later, in 2014’s general election, turnout fell from that of the previous comparable election. For example, in 2012 voting, with the U.S. presidency, U.S. Senate and U.S. House of Representatives at stake, turnout in Philipstown was 81 percent; in both neighboring Kent and Putnam Valley it was 73 percent; in Southeast, across the county, it was 74 percent; and county-wide it was 74 percent as well. 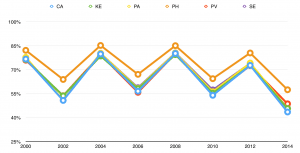 That does not mean loss of the duplicate turnout sheets caused voters to stay home; they might have shunned the polls for other reasons. But Philipstown activists say the duplicates were a big help in encouraging participation. And since candidate backers also used the sheets in village elections, scrapping them conceivably could affect the voting for mayor and trustees this March.

Board of Election rationale

According to Commissioner Anthony Scannapieco, Republican co-head of the Putnam County Board of Elections, the sheets were scrapped to promote fairness and make election workers’ jobs easier. (They usually work from around 5:30 a.m. until after polls close and often put in at least 16-hour days for minimal pay.)

Scannapieco told Philipstown.info/The Paper in December that he and Commissioner Robert Bennett, who retired as the Democratic co-head of the Board of Elections at the end of 2013, “decided to stop having poll workers fill out pickup sheets for political party runners. The pickup sheets were for any political party, not just the Republicans and Democrats” and consequently “problems started to arise with the fact that there were five constituted parties in the state of New York.”

At poll sites, “if parties had picked up all of the sheets available, there would be complaints and arguments over who should get them,” Scannapieco explained. “We decided that it was taking too much time from poll workers’ duties to provide the pickup sheets, which was a courtesy,” albeit, he claimed, one “frowned upon by the state Board of Elections.”

He added that “after this year’s [2014] election we will now have eight constituted parties and therefore there would be more conflicts … We cannot have our poll workers in the middle of the controversy over who should get a pickup sheet and more importantly taking all the time to make them out.” He noted that citizens continue to sign the poll book when arriving to vote and said that in lieu of the duplicate turnout sheets, political parties could “keep a poll-watcher there to copy names” and track turnout that way.

Catherine Croft, who in 2014 became the Democratic election commissioner and was formerly Putnam County Democratic Party chairwoman, said that when she learned of the elimination of the sheets, she called the New York State Board of Elections, which informed her that the sheets were not required by law.

“I think it is too early to tell if the lack of the party pickup sheets has had an impact on voter turnout in the towns that used the sheets,” she said Jan. 4. Following a review of county election results for the last five years, Croft pointed out that “Philipstown consistently has had the highest turnout rate of voters in the county, including this year [2014] when there were no pickup sheets. I don’t know what other town committees used to use party pickup sheets to call voters. In Kent the candidates usually stand outside the polling places (beyond 100 feet) on Election Day and do campaigning there.

“In Southeast,” where she lives in Brewster, “we stopped calling voters about eight years ago; there was too much of a ‘lag’ time between picking up the sheets, going through the list and calling voters, who would then tell us they had just voted,” she said. Croft agreed with Scannapieco that “poll watchers are allowed to be at the polling site and record the names of voters.”

Louis H. Liotti of Garrison, who chairs the Philipstown Republican Party, last week briefly discussed the elimination of the turnout sheets. “I understand why they did it” — to aid election workers and allow them to proceed with their jobs without party members hovering around and getting in the way, he said. But he saw advantages to having the sheets, too. “My own personal opinion is it is helpful because it helps either party … roust out last-minute voters [and] get out the vote,” Liotti said.

Cold Spring resident Aaron Freimark has volunteered with campaigns on various levels, including those involving Philipstown Democrats. He noted that “turnout in Putnam was very low this [2014] election, which was the first without party pickup sheets. It is clear the Board of Elections should not be doing anything that decreases turnout any further,” he said Dec. 23. “The party pickup sheets are very, very helpful for increasing turnout. Parties make calls every election, but nobody likes getting extra phone calls. The pickup sheets reduced the number of unnecessary calls, by telling the parties who had already voted; without the sheets, the parties won’t know who voted and who didn’t.”

Freimark charted the decline in turnout in the six towns in Putnam County and suggested that the practice of keeping a turnout list could still work, even with multiple parties. “The Board of Elections may have been concerned that there weren’t enough carbon copies to go around,” he said. “But there’s a very simple solution to that: we’ll take photos with our smartphones, and leave the sheets for someone else. That’s actually quicker and more efficient for us and it [saves] poll workers lots of time, too.”