Contemporary art mavens wishing to delve deeper into the work of artists they admire, as well as those with limited knowledge but more curiosity, are both the target audience of the artist profiles filmed over decades under the banner of ART/new york, and now the focal points of Garrison Art Center’s new Contemporary Art Cabin Fever Film Series.

The films, some in paired screenings, others standing alone, were all produced and directed by Paul Tschinkel, a painter who in the early ’70s “turned to video as a way of making art,” as ART/new york’s website describes. 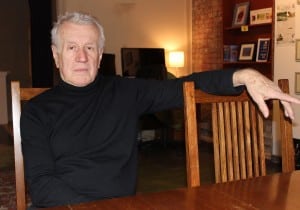 Filmmaker and artist Paul Tschinkel
(Photo by A. Rooney)

Tschinkel, a long-term, part-time Philipstown resident, suggested the screenings of the seminal series, now numbering 67 films, distributed for years to colleges and cultural institutions, to the Art Center, and they form a centerpiece of their winter season. Each will be shown at 3:30 on six Sunday afternoons, from Feb. 1 through March 8, with an admission of $10, free for members.

Tschinkel plans to be on hand for most if not all of the screenings, and a discussion will follow each screening. The program notes invite attendees to “BYOB and we’ll pop the corn!”

Tschinkel stresses that they were very intentionally made with an emphasis on keeping them in “a very accessible language that is clear and simple and direct. There’s no art theory in them; they’re put into a context that is understandable,” and he says no one should feel intimidated about coming to see them.

For the series at Garrison Art Center, Tschinkel has paired some artists intentionally. The programs featuring just one artist have films with a longer running time:

The ART/new york series began organically, back in the ’70s. Tschinkel, a graduate of the MFA program at Yale University, began as a painter himself, as well as a professor, getting his start at the University of Alaska, where he spent two years.

In that pre-Internet world, he relied on art magazines to keep him abreast of all that was happening in the art world in New York. “So, when I came back, the series began as a magazine. I looked at a number of exhibitions each month, but I found that this kind of quick coverage wasn’t enough and I decided to do things more in depth,” Tschinkel said.

Beginning in 1972, with a “portable video recording machine,” Tschinkel soon shifted away from gallery coverage and turned his lens instead toward interview portraits of individual artists, which he started showing in 1974 on the “burgeoning New York City cable system. Living in Soho, I knew everyone and they wanted to be on my show, to talk about their work.”

By 1979, after creating the portraits for five years, Tschinkel got the idea of packaging the interviews as a kind of video magazine, offered to colleges, art institutions and individuals for sale on a subscription basis. This continued for decades, and in fact the films, which Tschinkel continues to make — “I’m still excited about doing them,” he said — are produced at a slower pace and with lengthier running times now.

He tends to film just one each year now; recent subjects have included April Gornik, Mark Kostabi, Lisa Yuskavage, David Salle, Richard Phillips and Jack Goldstein, and Tschinkel is currently working on one on Robert Longo. Collectively, they have become, in effect, a form of historical documentation of a particular time and place in the art world of the late 20th and early 21st centuries.

They remain for sale, now in DVD form on Tshinkel’s website, and can be found in many libraries and in the stores of many museums, including the Museum of Modern Art and the Whitney. In addition, ART/new york has been screened all over the world, and the whole series has been translated into Japanese by Video Gallery SCAN in Tokyo.

“As time elapsed, I became well known though I never was a promoter — I’m just interested in artists,” Tschinkel related. “I still call myself an artist, but in a different media. Everyone was very cooperative, because it was a way of getting information out to the world. Most artists are not that articulate about their work verbally; they say it through their work. So, I had a whole plethora of art critics, museum directors and dealers eager to help me.”

The video portraits are not just talking-heads interviews with the artists — they also contain perspectives and commentary from others expert in evaluating and interpreting the work, as well as visits to the artists’ studios.

In Tschinkel’s words: “The intent was to go behind the surface of someone’s work. I always look for that ‘other’ part of a work of art that is perhaps not so well known. Also, I knew most of the artists I covered so I could talk with them directly. The fact that I studied painting — there was that kind of trust.”

For more information, visit artnewyork.org or garrisonartcenter.org, or phone the center at 845-424-3960.