Playing in the final of four games against the Putnam Valley Tigers at the second annual Coaches vs. Cancer Basketball Games on Sunday afternoon (Jan. 25) at the Haldane gymnasium, the Blue Devils varsity boys basketball team and the Tigers battled to a 30-30 halftime score. 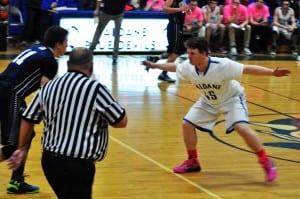 Haldane surged to a 20-point lead in the second half, led by Peter Hoffman with 25 points, Edmund Fitzgerald with 10 points and Garrett Quigley with seven points, and seemed to be cruising to an easy victory. However, with just 3:39 left in the game, Haldane’s leading scorer Hoffman fouled out.

Seeing an opportunity, the Tigers clawed their way back to within two points and had a chance to win or tie the game in their final possession, but with a towering Haldane defense standing in their way, their final shot was off and Haldane went on to win 58-56. Key performances by Ryan McCollum, Nick Allen and Aiden Siegel contributed to this team victory. 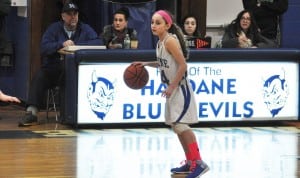 Seventh-grader and JV leading scorer Olivia McDermott brings up the ball on the Putnam Valley Tigers.

In the junior varsity games, the Haldane girls won a nail biter over the Tigers, 36-34, led by Olivia McDermott’s 15 points, and Jazmyn O’Dell and Willa Fitzgerald each contributing nine rebounds. In the opening game, the Haldane boys, led by leading scorers Kyle Sussmeier with eight points and Blaine Fitzgerald with six points, fell to the Tigers 50-32.

Thanks to all teams and fans for coming out and supporting the Coaches vs. Cancer Basketball Games, which benefits the American Cancer Society.