In a Friday night classic, the Haldane varsity boys basketball team visited Putnam Valley High School on Feb. 6 to take on the Tigers. Meeting for the second time in three weeks, the Blue Devils were playing in front of a lively, standing room only crowd, half of them Haldane fans who made the short trip to the valley.

From the opening tip to the final buzzer, the Blue Devils and Tigers left it all out on the floor. So did their fans. Haldane fans in attendance matched the vocal Putnam Valley home crowd, cheer for cheer. The tenacious Blue Devil defense enabled Haldane to pull out to a comfortable 11-point lead heading into halftime. In the third quarter, the Tigers’ offense began to chip away at the Haldane lead; they entered the fourth quarter tied at 33-33. 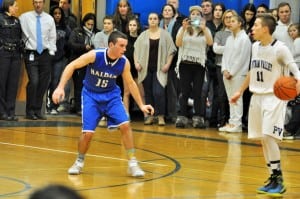 Utilizing their towering defense to shut down the Tigers’ offense, the Blue Devils took control of the game late in the fourth. As chants of “Let’s go, Haldane” echoed through the high school halls, the Blue Devils made the crucial baskets in the final minutes to pull away with a 49-43 victory.

The victory gave the Blue Devils a sweep of the season series and the Conference 1 League C title. Leading scorer for Haldane was Peter Hoffmann with 23 points. The Blue Devil defense blocked 16 shots.