Gen. Christopher Gadsden, a Revolutionary War patriot, reportedly considered the rattlesnake so apt a symbol of dangerous resolve that the 1775 flag attributed to him features one — coiled — above the slogan “Don’t Tread on Me.”

Some 240 years later, that remains good advice for anyone walking the hills of the Hudson Valley, home to the timber rattler (in Latin, Crotalus horridus, a name that pretty much explains itself). The snakes are described as typically shy, although one, dubbed Pooh, found herself mingling (under close supervision) with human society at the Taconic Outdoor Education Center (TOEC) in Fahnestock State Park on Jan. 10. 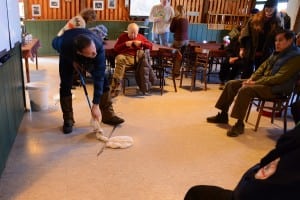 Ed McGowan wraps up his presentation – and Pooh, ensconced in her bag.

Ed McGowan, director of the Trailside Museum and Zoo at Bear Mountain State Park, across the Hudson River from Philipstown, brought Pooh to the TOEC for a talk on rattlesnakes, part of a Saturday program, sponsored by the Hudson Highlands Audubon Society, that included sales of bird seed and a chili lunch.

Often “they don’t want to be seen,” McGowan said of timber rattlers. “They just want to stay cryptic.” If encountering one, he advised that a hiker “look at it from a safe distance, enjoy it, and then give it a wide berth.” He added that it is “really infrequent” that a timber rattler bites someone, “considering all the hikers and all the people” outdoors in the Hudson Highlands.

Although the New York State Department of Environmental Conservation refers to the timber rattlesnake, a form of pit viper, as “the largest venomous snake in New York,” it also lists the rattlers as “threatened,” after long-standing efforts by two-legged predators (Homo sapiens) to exterminate them — dead rattlers once brought bounties, a practice banned in 1971. Development also took its toll.

“Contrary to popular opinion, a rattlesnake will not pursue or attack a person unless threatened or provoked,” the DEC website declares. They eat small mammals, as well as the occasional bird, amphibian or other snake, and in New York, “protection of habitat is now a primary concern,” the agency also notes. “Collecting rattlers from the wild is prohibited, but poachers are still active in supplying the black-market pet trade.”

Seemingly oblivious to such concerns, at the TOEC Pooh displayed her light-colored head and geometric decorations on a brownish-ochre body. She appeared to be about 3 feet long, if stretched out. McGowan said such rattlers do not grow to gigantic lengths. “There are no 6-foot rattlesnakes around here,” he told the audience. 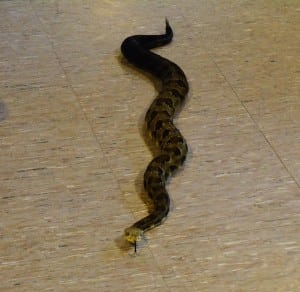 Pooh, a timber rattlesnake from the Bear Mountain State Park zoo, checks out the floor space at the Taconic Outdoor Education Center.

According to McGowan, Pooh, who retains her venom, weighs approximately 750 grams (about 1.66 pounds) and is “pretty chunky.” At some point, she came down with “listless syndrome.” The same malady affected another wild timber rattler, rescued and called Winnie. “So they ended up living with us,” in the zoo, McGowan said Jan. 20 in a follow-up phone conversation with The Paper.

He attributed the syndrome to a nematode, a blood-borne parasitic worm. By McGowan’s estimate, Pooh and Winnie are 20 or 25 years old. “They can live a long time” and scientists determined one rattler, not in captivity, to be about 40 years old, he said.

In winter, timber rattlers hibernate, unless like Pooh and Winnie they live indoors in heated quarters, he said. “Ours are active but a little sluggish. They go through a seasonal slowing down.”

Slowed down or not, Pooh delighted the three-dozen-plus attendees of all ages at the TOEC as she wandered the floor in serpentine waves, eyes focused and slender tongue wisping through the air. McGowan kept her well back from anyone’s feet and she did not seem to mind being the subject of intense attention and awe.

When it was time for the star attraction to retire and everyone else to eat lunch, McGowan scooped her up with a hooked rod and returned her to a bag — perhaps for a well-deserved snakely snooze.