On Saturday, Feb. 21, Catholic Youth Organization Coach Anthony Pezullo, with help from assistants Darrin Santos and Paul Cofini, took charge of their 10 basketball players to get the season moving with something fresh and new to Cold Spring’s Our Lady of Loretto Knights CYO basketball program. 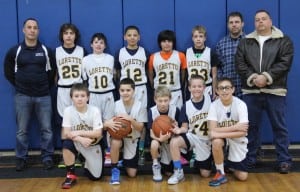 Competing for the first time in the playoffs at Bronxville, the sixth-grade boys’ C division won the quarterfinal game, which started slowly but escalated to a tooth-and-nail battle. Starting with Corpus Christi from Port Chester, the Knights seemed poised to succeed, and won a victory. Leading scorer for the Knights was Kevin Van Tassel with 8 points.

The following day, the team headed off to Armonk to play in the semifinals against second-place winners Holy Innocent of Pleasantville. While the boys were bluffed by the opponent’s aggression, once again their tireless efforts proved well. With 3:45 left in the fourth quarter and Loretto clinging to a 35-31 lead, the Knights knew they needed to step it up, and the Knights held off Holy Innocent to win the game 41-33. Leading scorer for the Knights was Christian Pezullo with 16 points.

With the win, the Knights (10-2) move on to the championship game on Sunday, March 1, against St. John & Paul of Mahopac. The game starts at 2:30 p.m. at Iona Tully in New Rochelle. All are invited to come cheer the Knights to victory for what could be Loretto’s first CYO Championship banner.