Who can resist a rollicking, marauding, pirate? No — let’s take that up a notch — who among us is not susceptible to the charms of rambunctious singing and dancing brigands of the seas? Not many, as the eternal popularity of tales told of these romanticized ruffians of centuries ago attests.

A ship laden with these rascals sporting swords along with their egos will be docking at Haldane on March 13, 14 and 15, as The Pirates of Penzance scamper into the auditorium chasing fair maidens, battling a beleaguered police force and, so it is rumored, making more than one foray into the aisles to interact with unsuspecting audience members. (You have been warned.) 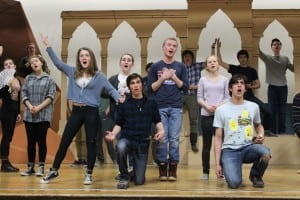 Practically two hours of nonstop singing: getting ready at a recent ”Pirates” rehearsal

“Pirates are always fun,” said director Martha Mechalakos, “and this is a particularly bubbly, fun story with a lot of satire and a lot of silliness. It pokes fun at a lot of conventions — real social satire. There’s a broad appeal to the hero and heroine, there are lots of little plot twists, the bad guys aren’t really bad guys and everything works out in the end. It’s full of energy, with fabulous costumes, romance, the works. Plus it’s accessible to all ages. And, the music is just gorgeous.”

Haldane drama is performing the very popular “Central Park, Delacorte Theater” version of the show, as revived in 1980 to celebrate the centenary of the original opening. That production was a huge hit and wound up transferring to Broadway, where it also enjoyed great success.

With sword-fighting such a central component to this show, training was required, and courtesy of a Haldane School Foundation grant, fight instructor Rod Kinter of the American Musical and Dramatic Academy (AMDA) was brought in to choreograph the fights and to teach the students how to bring it all to life safely. In three separate sessions, Kinter worked with the performers on their blocking and techniques, and the fight rehearsals were then incorporated into most of the ensuing rehearsals to keep the skills up. 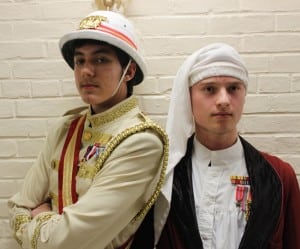 Along with the fun, there is the Gilbert and Sullivan music — lots of it, as the show is largely sung. “The music is the hardest we’ve done. There’s more music in a single performance than any of the cast members have ever sung — the finale alone lasts for 10 or 15 minutes, and it’s all music,” Mechalakos said.

To handle that music, she has been encouraging all cast members to vocalize before heading into rehearsal, and has been instructing them on “staying on your breath, keeping the jaw relaxed, and constantly reviewing the music so that it’s in your ears and in your head.”

The good part of all this music is that, unlike many shows, the cast is always engaged, with many onstage for most or all of each of the two acts. “There’s no downtime,” Mechalakos said, “which makes for more focused rehearsals, too.” Adding to the pressure, the brutal winter weather has cut severely into rehearsal time, in a musically complex show, but as the snow, it seems, must go on, the show must go on, too.

A description of Ruth, the character played by Amanda Erickson, pictured here, reads: ’A pirate maid-of-all-work and Frederic’s nursery maid, Ruth mistakenly bound Frederic to a pirate instead of a pilot.’ That about sums up the show overall.

After two shows in as many years that highlighted tap dancing, the novelty of the dancing in Pirates is welcome for choreographer Katie Bissinger, who noted: “All of the choreography used for this production is based on the extremely fun and silly work done by Graciela Daniele for both the film and Delacorte versions with Kevin Kline and Linda Ronstadt.

Between the exciting swordplay choreography that Rod Kinter has done, the goofy frolicking of the ladies, the bravado of the pirates and the Charlie Chaplin–like policemen, I have had a ridiculous amount of fun on this show and I am certain the audience will do the same.”

For only the second time in recent years, The Pirates of Penzance has been double cast in each of the 10 principal roles. One cast will perform the Friday evening and Saturday matinee shows and the other the Saturday evening and Sunday night performances.

The benefits of this to the drama program are twofold: It gives more students the opportunity to step into leading roles, and it also allows the rehearsals to run more smoothly, without the worry that a pivotal cast member can’t make it on any given night, as their counterpart can step in instead. All of the members of the ensemble will perform in all four performances.

Two students, junior David De Caro and senior John Swartzwelder, both new to principal roles in musicals, will be undertaking the sharing of one of Penzance’s most challenging: Maj. Gen. Stanley. Aside from seeing a great deal of stage time, particularly in the second act, the character is known for delivering the extremely complex, rapid “patter” song “I Am the Very Model of a Modern Major General.” Here is but a small sample of what the singer has to master, all to a precise rhythm:

I quote in elegiacs all the crimes of Heliogabalus,
In conics I can floor peculiarities parabolous;
I can tell undoubted Raphaels from Gerard Dows and Zoffanies,
I know the croaking chorus from The Frogs of Aristophanes!

DeCaro said that the hardest part of learning the song is that the major general “is such a pedant, and so his pronunciation has to be precise.” Comparing this role to his previous, as Rev. Parris in the fall production of The Crucible, De Caro stated: “In Crucible I had to get an emotional connection to someone I really wasn’t like, and that was harder for me. For this I looked up all the lyrics, recited them over and over and have worked with Ms. Mech [as the students call her] privately to learn it well.” 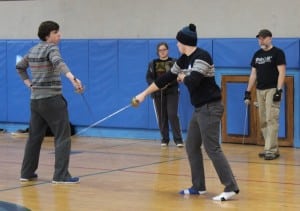 Swartzwelder, whose second “older man” role this is (he was Giles Corey in The Crucible), called the major general “much more flamboyant: a character you remember.” He’s enjoying the challenge and enjoying doing theater, period, having just begun in his senior year: “I wish I’d come to it earlier, since I was a freshman. I’ve made new friends and have had a great time doing it. My mom nudged me — she wanted to me to step out of my comfort zone. It’s hard being a student, an athlete, working on weekends and adding this, but I like to look at end pictures — battling through all of these occurrences and obligations is always worth it in the end, and this show is going to be great.” Swartzwelder called it “a great way to put on a different hat, and the perfect way to express yourself after a hard day full of APs.” 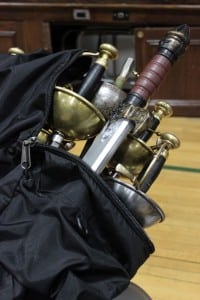 Tools of the pirate trade, waiting to be unsheathed in comic battle

DeCaro thinks that Pirates is going to be a lot of fun. “It will require active audience participation. The major general plays to the audience. Plus it’s great for all ages — smaller kids will get a kick out of it because it’s just fun, happy-go-lucky, and we’re trying to add a spark all our own. I come to rehearsals tired and I leave energized.”

Swartzwelder agreed, “This show is a great way for the community to see the creativity that Haldane harvests in the students.”

The Pirates of Penzance will be performed on Friday, March 13, at 7 p.m.; on Saturday, March 14, at 2 p.m. and 7 p.m.; and on Sunday, March 15, at 2 p.m. at the Haldane auditorium. Tickets cost $15 for general admission, $8 for students and are free of charge for seniors with a Haldane Gold Card (available by calling the Haldane District Office, 845-265-9254, ext. 115), and will be available at the door — no advance reservations are required. All children under the age of 12 are admitted free of charge to both matinees.