It can be difficult for language students to push past the tedium of language learning, the drills and vocabulary retention, and into the exploration of language to a living, breathing culture — particularly so in high school, where curriculum standards often prescribe a course of study that separates the structure of the language from its spoken life.

To take language away from the textbooks, and to help students reared in Philipstown gain exposure to the world beyond it, the Haldane language immersion program, a day of saturation in cultural activities and cuisine related to the French and Spanish languages, occurs each March. 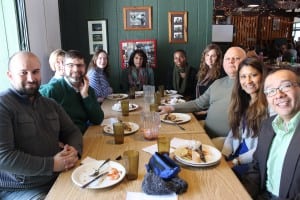 Begun over two decades ago as the brainchild of then Haldane Spanish teacher Phil D’Amato, who developed it along with his colleagues Kathryn Robb and Eva Cagianese, the program has evolved over time, but at its core the goal, said Nina Ortiz, current Haldane Spanish teacher and foreign language chair, is exposure: “Even though it’s only a day, it’s a taste of what it’s like and hopefully awakens that hunger, which most of them already have, for language and culture. Hopefully they can continue being engaged in it and pursue it beyond high school.”

All three former teachers were present at this year’s event March 6; they enjoy returning each year. D’Amato spoke of immersion’s beginnings: “The original need was there because kids didn’t travel a lot and they needed to come in contact with those who came from other countries, in a way which didn’t take them out of Philipstown … The first year was a shoestring with no budget, and volunteer presenters.”

Over the course of a breakfast-through-dinnertime day spent at the Taconic Outdoor Education Center, host to the event each year, students rotate between talks given by guest presenters, performances by musicians from a country where the language is spoken and a presentation of their own in a student “coffeehouse” where they are able to perform or recite something of their choice. The centerpiece is an “international” lunch, prepared by Mike Gasparri of the Taconic Center and his staff, highlighting dishes from the national cuisines of French- and Spanish-speaking countries. 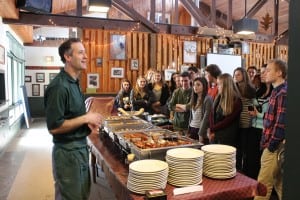 Mike Gasparri of the Taconic Outdoor Education Center explains each of the international lunch offerings to hungry Haldane students.

The day is funded by the Haldane School Foundation; their grant is then matched by Haldane itself, with the students adding a small contribution.

About 50 students attend, with the language teachers choosing which students to invite, with enthusiasm and affinity factoring in as much as high grades. The invited students, largely though not exclusively upperclassmen, then have to fill out an expression of interest, detailing why they wish to attend and how they plan to contribute to the day. Options include documenting the event through photography, composing thank-you notes and other tasks. Planning for the event begins soon after the previous year’s has concluded, said Ortiz, with the scouting of presenters and musicians and lining up of the many components.

This year, for the first presentations, the students divided up between their languages, with the Spanish students sitting down to a presentation by Salvadoran-born poet Jose Gonzales on “my life as a Latino, as an immigrant, as someone who grew up in El Salvador,” interspersed with a reading of some of his poems. Rodriguez began by discussing the term “Hispanic,” noting that the term itself came from the U.S. government in the 1970s and indicates a connection with Spain, a link, he noted, that is not always positive. “Spain conquered,” he said succinctly. 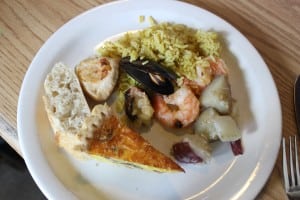 A sampling of the ’international lunch’ offerings

He then spoke of the quandary some Latinos feel when presented with the labeling of ethnicity: The simple “Am I white?” issue, and all the pondering it presents for those asked to define who they are in a word. Gonzalez urged the students to “be aware of what the preferences are and be aware that many of the terms we use for immigrants, we gave to them.” He then gave a personal history of his trajectory from his childhood as the son of a man who sold soap on the street in order to save money for his family to emigrate to the U.S. to his experiences as a young immigrant suddenly transplanted to Connecticut and, finally, to his young adulthood, transformed by a love of Shakespeare, eventually receiving a master’s degree in English.

Meanwhile, the French language students were treated to something altogether different: a fencing workshop, replete with not only a discussion of the French terms used in the sport but active participation, as the students were outfitted in the gear and were taught to parry, dodge and lunge. The students also learned of the creativity involved in fencing and were encouraged to make a list of French vocabulary as they went through the actions.

And the laden-with-food buffet table beckoned, as Gasparri explained each dish and its ingredients, urging each student to try a little of everything. The students (and teachers) dove into paella, empanadas, ratatouille, quiche, roasted sage potatoes, baguettes, and mushrooms stuffed with chorizo sausage, before finishing everything off with a mousse au chocolat.

After lunch the groups were split again. The French 4 class had this to report about their presentation:

Ms. Jerrice Baptiste is a poet of Haitian origin who hosts a radio show called Women of Note, which features world music. Prior to meeting with Ms. Baptiste, our teacher prepared her poems with the students of French 4 and 5. We translated some of her poems from English into French, and read them at Haldane High School’s cultural immersion day. She wore a fabulous traditional Haitian outfit, and she spoke in calm, wise tones. She challenged the group to compose individual poems about their grandparents using color associations. She has previously collaborated with Haldane French students and faculty to translate her work.

The Spanish students were treated to a talk by 2008 Haldane grad Lily Rubino, who gave a personal history of her years since graduating from the College of William and Mary with a degree in anthropology and environmental science, years in which she has spent time, in various capacities, in the Dominican Republic, Costa Rica and Colombia. Most of her presentation detailed the time she recently spent in Leticia, in the Amazon region of Colombia.

Haldane graduate Lily Rubino spoke about her travel and work.

“I wanted to challenge myself and actually do research in Spanish,” she said, describing herself initially as “really nervous, but then I forced myself and reaped the benefits. People laughed at my Spanish in a kind way, and I laughed at myself.” Rubino brought along a number of artifacts from the region in which she spent time going house to house interviewing and gleaning information from the indigenous people of the area on their access to potable water supplies.

Singing the praises of travel in terms of acquiring language skills, she noted: “Once I was in Leticia I became so excited about actually learning and speaking Spanish. Try different avenues, you won’t regret it — get out into the world.”

The talks were followed by an afternoon of music. Before the Viva México mariachi band took to the stage, several students delivered reports in both Spanish and English on the history of that musical form. Once the band got into action, students didn’t need much urging to rise from their chairs and hit the improvised dance floor. 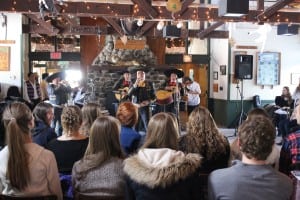 A more tranquil presentation from a trio consisting of players on keyboards, drums and a 36-string Peruvian harp followed, and then the activities concluded with the students’ own “coffeehouse” in which they performed in French and Spanish. A mixture of poems and songs and even a Harry Potter sketch translated into Spanish were highlights of the afternoon, which ended with another meal.