Upon entering the upstate arena, home ice of the Adirondack Flames from the American Hockey League, you felt that this was a different stage, a minor-league hockey rink converted into a basketball court, a semipro basketball court. A professional-looking scoreboard hung from the center of the arena ceiling. Two large video screens were on opposite ends of the arena showing live action and replays.

This was the state final four, high school March Madness. All weekend, high school teams from throughout New York state converged on Glens Falls to compete to be the champions in their class. The Haldane Blue Devils came up to play the 2013 champions, the Lake George Warriors, in the second game of the Class C semifinals. 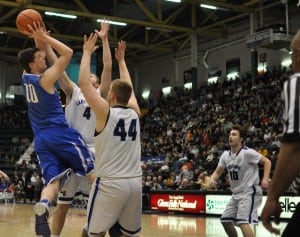 Haldane’s Garret Quigley goes up and over defense in the third quarter of the March 20 final four game.

As the clock struck 5 on Friday evening, the Blue Devils and Warriors tipped off for what would be a battle for the right to play another game on Saturday night against Waterville for the championship.

Haldane won the opening tip and quickly went to work, scoring the first basket of the game before the Lake George Warriors moved the ball quickly up the floor and hit the open 3-pointer. Haldane would continue to attack the basket on offense in the opening minutes with drives by seniors Ryan McCollum and Peter Hoffmann, but the Warriors battled back and matched the Blue Devils basket for basket, taking an 8-7 lead with 3:54 left in the first.

Lake George and Haldane would continue to attack on offense, with baskets falling easily for the Warriors and Haldane’s coming up a bit short. As the first quarter came to a close and Lake George was leading 15-8, Haldane senior Edmund Fitzgerald had a slam dunk to close the gap to 15-10.

In the second quarter, both teams traded baskets before Lake George pulled ahead 20-12. The Blue Devils, sensing the game was getting away early, went on a 7-0 run, with a huge 3-pointer by Hoffmann to cut the Warrior lead to 20-19. The Warriors, playing on their “home court” in Glens Falls, continued to take advantage of open looks on offense to rain 3-pointers on Haldane’s final four parade.

The 200-plus Haldane fans, who had made the journey up I-87 North for the chance to see the boys basketball team make Haldane history, were loud and proud of their Blue Devils with chants of “defense” and “let’s go Haldane.” Lake George closed out the half leading Haldane 29-21.

The Blue Devils came of the locker room ready to take charge in the third quarter with senior forward Garrett Quigley immediately going strong to the basket and putting up some quick points for Haldane. But every time you thought Haldane was getting the momentum, the Warriors responded, mostly with a backbreaking 3-pointer. 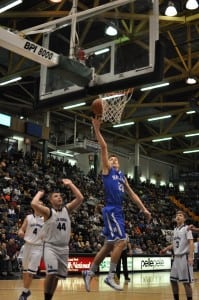 Peter Hoffmann goes strong to the basket in the first quarter of the March 20 final four game.

As the Haldane defense focused on shutting down Lake George’s star player Joel Wincowski (averaging 33 points per game), their open sharp shooters continued to hit net. Some in the 800-plus home crowd were probably starting to prematurely celebrate the Lake George win and thinking about the next day’s championship game. But the Blue Devils were not about to go quietly. With 2:14 left in the third quarter and Haldane trailing 50-30, the Blue Devils closed the third on a strong 8-4 run to end the quarter down 54-38.

As the fourth quarter started, Haldane came out energized, pressuring every possession, every inbound play, creating turnovers and getting some quick baskets. As they created opportunities to cut into the lead, Lake George would continue their hot shooting, draining baskets or hitting free throws. Haldane was down 59-47 with 4:06 left on the clock, and hope was still in the air for the Blue Devils. The Haldane section was still cheering “defense” for their Blue Devils, as they swarmed the Warriors players and continued to pressure the ball to create turnovers. As the Blue Devils made their baskets, so did the Warriors.

While the game clock ticked down to the final two minutes with Haldane trailing, key possessions did not go Haldane’s way, and the Warriors continued to capitalize on every opportunity. The Blue Devils, inspired by their comeback, realized time was running very short and they needed a few turnovers if they were going to make it to the finals. Haldane pressed the inbounds passes and attempted to steal the ball, but Lake George made the passes out of the trap or made the free throws or shots that prevented Haldane from getting any closer than 10 points for the remainder of the game.

As the Warrior fans started to celebrate in the final 10 seconds, the Haldane faithful rose up and cheered on their Blue Devils, who took them on this joyous journey to the state final four. The final score was Lake George 70, Haldane 60.

Leading scorers for Haldane were Edmund Fitzgerald with 17 points, followed by Hoffmann who had 16.

Lake George went on to win the Class C championship Saturday night, beating Waterville 53-50 on a last-second 3-pointer by Wincowski.