Having just enjoyed a stay at the Desmond-Fish Library, the Alternet is now circulating to its nearby neighbor, the Julia Butterfield Library, where it will take up residence from March 31 through May 23. The Alternet is a collaborative installation bound together within the confines of an antique, 50-drawer library-card cabinet, conceived and organized by Peekskill artist and teacher Carla Rae Johnson.

Passing a store window at the Coop in Peekskill a few years ago, Johnson spotted the cabinet, which “stopped me dead in my tracks,” she said. Despite a hefty price tag of $500, she immediately thought of it as a home for some kind of art piece and purchased it. It then sat in Johnson’s studio for two years until she determined how she wanted to use it: as a home for 15,000 catalog-card-sized works of art that would reside there permanently, emanating, largely in groups of 300 pieces each, from over 70 artists, writers and other creative people. 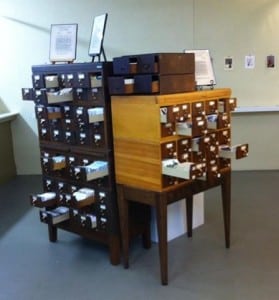 The card catalog that serves as the ”Alternet” on display in a recent Asheville, North Carolina, exhibit

Johnson’s idea eventually came to her through an earlier experience with library card catalogs. She taught for 10 years at Marymount College in Tarrytown, during the period when they de-accessed their paper cataloging system in favor of digital. Although the college decided to retain the bank of blond wood that held the cards, they elected to get rid of the cards themselves, fearing they would cause confusion if users obtained obsolete information from them.

To fill the empty drawers there, Johnson worked on a project with her sculpture students to design small objects to be placed in random drawers. Her employment there ended, and that project was never completed, but it lingered in Johnson’s mind and returned to her in the spark of the idea for the Alternet. 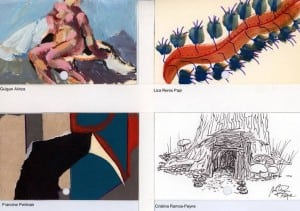 “I decided to do cards as a large-scale collaborative project. I sent proposals out to over 100 fairly far-ranging artists, asking for a year’s worth of work and a commitment to producing 300 cards each. Amazingly, 82 said yes, and we ended up with 76 participating. A lot treated it as a kind of journal activity, doing a card a day for a year, with 65 to goof off — although some did the full 365. A few artists could only do 150, and they share a drawer with another artist,” Johnson explained. Asked why she thought so many honored that large commitment, Johnson said, “It’s the artist’s personality; you rise to a challenge like that.”

When the packages of cards started arriving, Johnson found herself “amazed by these beautiful things. In fact each time I install the exhibit I get waylaid pulling out cards. I’ve wound up being the keeper of 15,000 works of art. All of them are thoughtful; some are about color and form, some diaristic, some political.” 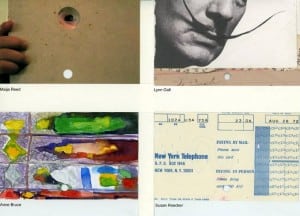 The offerings include a series, by Peekskill’s Barbara Lipp, of cards all referencing Benjamin Franklin, the founder of U.S. libraries, and another grouping from a class of teenagers in Indiana, cultivated through Johnson’s then 13-year-old niece. Some were created by hand, others are filled with text, still others with found materials and/or computer-generated imagery.

If you were born before the 1990s you may remember hours spent flipping through cards in the musty wooden drawers of a card catalogue at your favorite library. There was a delightful serendipity of finding unexpected listings or of making surprising connections. We experience similar discoveries today on the internet, but the tactile, olfactory, and kinesthetic elements of the search have been lost. It is to fill this gap that more than 70 artists, writers and creative thinkers are participating in the Alternet.

The Alternet has been exhibited in 10 venues, including one in Asheville, North Carolina, often as a result of a connection through one of the artists. This June it will travel to the Blick Contemporary Art Gallery in Galesburg, Illinois, before heading back east to Wagner College on Staten Island. Johnson believes libraries have responded to it not only through the content, but also because of its “small footprint” as an exhibit. 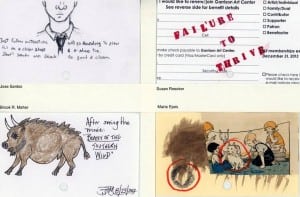 Each new exhibition venue usually brings a turnout of included artists. “They love revisiting it,” Johnson said, “because essentially it’s revisiting their year and the important things which happened in it either personally or in the news.”

Johnson herself is included amongst those artists. She contributed to her own project as part of a three-artist grouping. “With each card, one of us put a mark of some kind on it, then passed it along to the next person. Every card wound up having three hands.” For more information on Johnson, visit carlaraejohnson.com. On Saturday, April 4, local artists whose work is part of the Alternet will give a presentation from 2 to 3 p.m. at Butterfield Library.