Lee Reich has turned his property in New Paltz into what he describes as a “farmden, a little more than a garden, not quite a farm.” His specialties are fruits and nuts. He doesn’t like to waste space with plants or trees that are purely ornamental. Why bother when you can fill it with plantings that are aesthetically pleasing and make a healthy snack?

Reich, who has a doctorate and graduate degrees in soil science and horticulture, has managed his farmden for 34 years, and at a recent presentation at the Native Plant Center Spring Conference, he covered the many native fruits and nuts that are suitable choices for our area.

He advised that potential new farmdeners should evaluate their sites before getting started. If you choose the right plants for the conditions, there is very little maintenance. “Most fruits need direct sun, six hours or more, but currants and gooseberries do OK in shade. Once the plants are established, there is very little work. Some weeding, mulching, pruning depending on what you planted, and that’s about it,” Reich said. There aren’t any significant pests that need spraying or attention in the list of plants included here. 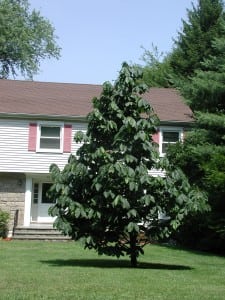 The native pawpaw tree has fruit that is described as tasting like banana custard.

Fruits and nuts need well-drained soil. To test how fast water drains, Reich advised taking a can that is open on both ends and pushing it partway into the soil. Fill it with water, let it drain, then fill it again and measure how fast the water level goes down in an hour. If it is less than 1 inch, there is poor drainage and you should choose a different site. Plants that like “wet feet” or moist soil will do well in that spot, instead.

Native nut trees that will grow well and have visual interest in our local landscape include filbert, butternut, black walnut, hickory and chestnut. That’s a nice variety of nuts! Considering that 10 percent of California’s water is used for growing almonds and the state is hitting its fourth year of drought, growing our own native nuts locally makes a lot of sense. The American chestnut was hit hard by blight in New York, but a new resistant tree has been successfully planted. 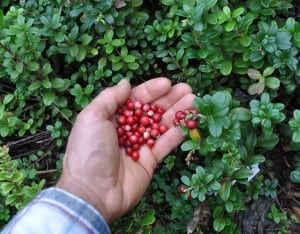 Native lingonberry is an evergreen shrub with edible berries.

We don’t have a lot of native fruit trees, which is why the pawpaw comes up whenever the subject is raised. While I haven’t tasted it, and there were only a few raised hands in the audience at the conference that indicated they had, it’s supposed to be tasty with a flavor described as banana custard. The native pawpaw (Asmina triloba) is a nicely shaped, 15- to 20-foot tree that flowers, bears fruit and has good fall color in its leaves. Reich recommends the varieties Zimmerman or Pennsylvania Golden. It will bear fruit three to five years after planting.

Reich said he plants fruits and nuts simply because he likes to eat them. “It’s a natural, good-tasting dessert. I think it puts all this horticultural knowledge together. The care that you lavish on them comes back in great-tasting fruits, and it’s all very low-maintenance.” He plants a lot of things that people have heard of and a lot of things they haven’t. He especially likes his blueberries and has built an enclosed cage with wire mesh walls to preserve the blueberries for himself; he doesn’t share with the birds.

Reich emphasized that it doesn’t have to be a choice between aesthetic and productive plants. He said: “If you choose the right fruits, you can integrate them into your landscape. It’s nice to grow things that haven’t been sprayed or shipped thousands of miles.”

During lunch at the conference, I chatted with one attendee, a middle-aged man from Connecticut, who talked about how he had decided to take out everything from his yard that was unproductive, including grass. He has already planted a vegetable garden and was putting in a rain barrel. He was inspired by all the possibilities and wanted to be more sustainable. There may be many more farmdens in the making.