It’s not that far away. If you’ve heard of Arts on the Lake (AOTL) and thought about attending one of its many events and classes, but weren’t quite sure where it is, the answer is simple: just a few minutes immediately north of the center of Carmel, on Route 52, in Kent Lakes. When you see an old firehouse and the lake behind it, you’re there, as AOTL took over of the former Lake Carmel firehouse when a new one was built, about 10 years ago. When the building became available, it was returned to the Park Department, and the community voted for it to become an arts center.

With the energy that the decisive vote provided, members of the Lake Carmel Park District Advisory Committee and residents of all areas of the Town of Kent formed AOTL in spring 2006 to develop programs, even though the space wasn’t yet ready for them. The programs were initiated in private homes, and the first events that actually took place in the space were a violin concert and a poetry reading. 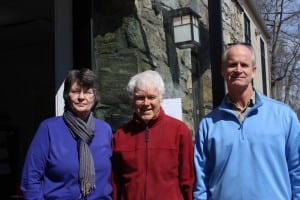 Determining what types of programming to provide was initially perceived to be complicated, according to James Shearwood, former AOTL Executive director and current theater group coordinating director and Interim Executive Director Ed Durkee, who described the split personality of the area. Developed largely in the ’30s and ’40s after the (earlier) creation of the lake through the damming of the Middle Branch of the Croton River, the shoreline was subdivided into small lots dotted with bungalows and cottages marketed to the middle class as weekend or summer homes for city dwellers.

Later, many people from city boroughs such as Queens and the Bronx relocated to these homes and remain there today, the community still categorized as “middle class.” West Kent, on the other hand, the center’s other main constituency, is more affluent.

It was important to the founders of AOTL, right from the start, to “bridge the sensibilities of both segments of the community,” according to Shearwood, “because Lake Carmel wanted us to be here as much as West Kent did.”

And that is what happened. “People have been pulled out from everywhere,” said Durkee. “Before, there wasn’t a cohesive point where people could meet. … It’s interesting because to learn about your community you can do various things: become a volunteer firefighter, join a service club, things like that. Well, the Art Center serves that ‘I want to join a community’ need as well. We have actual memberships, but you don’t have to be a member to attend.” 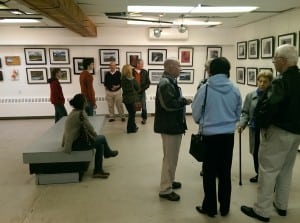 The divisions of AOTL, with advisory boards providing guidance to the executive director about their own offerings, are specific to art, theater, music and education, all of them in equal measure. “There’s an overall level of quality here that underlines things, and that’s crucial,” said Durkee.

The many interest groups, most grown organically from people wanting to meet others with similar interests and skills, include photography, writing and even a big-band jazz group. Shearwood said a ukulele group “embodies the spirit of what happens here. It started with a workshop, and now we’re hosting a Ukulele Invitational Extravaganza [on April 24], which is pulling people from all over the place, who are playing at high level.”

For the public, this translates into an array of possibilities. Teens are served not just with classes but with once-a-month rock concerts. This month’s is a CD release party for local group Take One Car, on April 18 at 5:30 p.m. Singer-songwriters are well represented too.

Other areas of interest, involve art exhibits and the Friends of Classical Music, which has become “a real mainstay for us in terms of the community,” Durkee noted.

Current and upcoming classes and events include Narratives in Art, in which children explore how narratives can be told visually, and — for adults — Intensive Painting, offered in a six-hour stretch on Tuesdays, and a Life Drawing class. Puppets in Peril: From Persia to the Pole, running May 1–3, features extravagant life-sized puppets, currently under construction at the center, in a performance of four ancient and classic poems “reimagined for both sophisticated kids and grown-ups.”

There are also play readings, stand-up comedy nights, outdoor summer concerts and even an evening devoted to The Mystical Sounds of Tibetan Bowls (May 6). Physical activity, in the form of Zumba and tai chi classes, round things out. 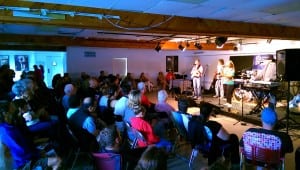 The multipurpose main room at Arts on the Lake is home to many concerts throughout the year. (Photo provided)

The center consists of two downstairs rooms, the larger of which affords constant views of the lake with floor-to-ceiling windows. For now, the vast upstairs area, which has those same windows, is approved for storage only, with a lack of money (quite a bit of money, alas) thwarting the dream of those affiliated with AOTL to renovate the space and create more room for performances and classes.

Previous grants have allowed for roof repair, window installation and work on the exterior, but the interior work is on hold for now. Durkee said that “fundraising is continual process.” Shearwood added: “We don’t get any federal monies except some from Putnam Arts Council. Our support comes from some private foundations and, occasionally, something out of the blue from a community member.” 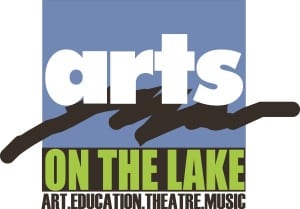 To generate wider audiences as well as share costs, AOTL often partners with other organizations. Currently, these include the Latino community in Brewster through a collaboration with Studio Around the Corner and the Houses on the Moon Theater Company (whose goal is to “make unknown voices heard”) to present De Novo, a documentary play derived from immigration transcripts, about the legal struggle of a teenage boy to stay in the U.S. It will be presented April 25 at 8 p.m.

In the warmer months, AOTL will again host a summer band camp, as well as a strings camp, both run by Carmel Middle School. Last year, 50 kids enrolled, and some had to be turned away.