Dan was educated at Haverford College and graduated with a B.A. in European history. He served in the U.S. Navy in far eastern waters during World War II, and upon his return he began work as a reporter for The Wall Street Journal, first on the textile beat, next as labor editor and then as front-page editor and occasional editorial writer. He also worked at Time magazine as a contributing editor in the business and finance section. 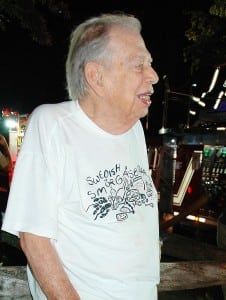 He joined the IBM Co., in 1954, as assistant director of public affairs, later director, handling among other matters the government’s anti-trust assault on the company. Since IBM’s CEO, Tom Watson, was a supporter of Jack and Bobby Kennedy, Dan was assigned to run liaison between IBM headquarters in Armonk, New York, and the Kennedy campaigns.  As a result of this work he subsequently became the communications director of the Kennedy Administration’s “War on Poverty,” working with Sargent Shriver, Adam Yarmolinsky, Pat Moynihan and Dick Goodwin.

In New York at the turn of the 1970s, he worked with IBM Director of Automation Research Charles De Carlo (later president of Sarah Lawrence College), on the $20 million IBM Seminar, which explained computers in understandable language and logic terms, as opposed to traditional arcane engineering accounts. Subsequently he ran a consulting firm in partnership with De Carlo, serving clients that included IBM, The New York Times, the Electronic Industries Association of Japan (EIA-J), Gulf Oil, Marsh & McLennan, and the City of Indianapolis.

In Cold Spring since 2000, Dan loved the river and walking up and down Main Street. He was frustrated by what he considered inadequate appreciation for the vital role of the Hudson as the main theater of the American Revolutionary War and thus in shaping the future of this country. He wanted to see a “dazzling” visitors trail using advanced communication techniques to tell the story to millions. He had also worked with Constantine Sidamon-Eristoff on efforts to prepare the Port of New York to receive the giant container ships of tomorrow and maintain the city’s pre-eminence in world trade.

Dan was known as a raconteur, a man about town, and the maker of a mean Negroni, his favorite cocktail. Throughout his life, he remained passionate about politics, international affairs and the economics of globalization, and more recently, about the critical role of the Hudson in U.S. history.

A service will be held on Sunday, May 10, at 4 p.m. at the Chapel Restoration on the Hudson in Cold Spring.