Spring conditions are deceptive and dangerous

The unofficial start of summer —Memorial Day Weekend — is fast approaching, and that means that kayaking on the Hudson River is once again about to get into full swing. Recreational kayaking has burgeoned in recent years. Some 8.7 million Americans participated in the sport in 2013, according to a report by the Outdoor Industry Association. An additional 6.6 million Americans took part in fishing kayaking, sea kayaking and whitewater kayaking. The report also stated that 47 percent of recreational kayakers go out just one to three times a year, a statistic that underscores a lack of experience among many paddlers and the need for increased attention when it comes to safety.

According to the United States Coast Guard (USCG), there were 110 deaths in the U.S. connected with canoeing, kayaking and stand-up paddling in 2013. Considering that more than 15 million people enjoy kayaking in its various forms, the number of fatalities is actually relatively low. The tragedy lies in the fact that many, if not most of the deaths, could have been prevented had the victims been more aware of the risks involved with the sport and taken preventive measures.

An analysis of USCG statistics pertaining to kayaking accidents published in 2011 yielded data that is not only cautionary but also hints at some of the preparedness kayakers need to embrace. Key among the findings: Drowning was the most frequent cause of death; the majority of drownings involved kayakers not wearing a personal flotation device (PFD); the most common injury was hypothermia. The leading factors contributing to accidents included hazardous waters, weather and kayaker inexperience. 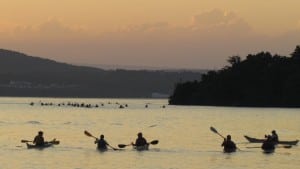 Local advanced-level kayakers have seen that inexperience and lack of awareness played out on the Hudson River. “I see people who buy a kayak and (immediately) consider themselves to be ‘kayakers,’” said James Hartford, a local architect and avid recreational kayaker. Hartford has taken numerous training programs through both Qajaq USA, an affiliate of the Greenland Kayak Association, and the British Canoe Union. He has also served as a teaching assistant at New York Kayak Company on Pier 40 in New York City. “The most common mistake I see is people overestimating their abilities, and seriously underestimating conditions.”

Hartford witnessed such flawed judgment on April 18, during a volunteer cleanup of Little Stony Point Park just outside Cold Spring. “People were paddling without PFDs in kayaks unsuitable for the rough conditions that day,” he said.

Numerous paddling websites strongly warn kayakers of a common and sometimes lethal mistake — dressing for the weather rather than the water temperature. On its website, the American Canoe Association (ACA) states that without proper equipment and clothing, cold water “quickly robs the body of its strength, diminishes coordination and impairs judgment” and that capsizing in water even as warm as 60 degrees can initiate “cold water shock.” It adds that in such conditions, “the body can (quickly) become incapacitated … and without a lifejacket this can be … fatal.” ACA asserts that when water is 60 degrees Fahrenheit or colder, “a wetsuit is a must and a drysuit is highly recommended.” Water temperature in the Hudson River doesn’t usually exceed 60 degrees until sometime in May. This year, water temperature has remained consistently above that threshold since May 16. 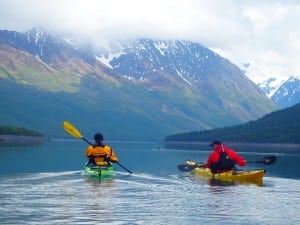 Cold Spring resident Ray Fusco, a lifelong paddler, former instructor and outdoor educator, echoed ACA’s advice. “Spring is the most dangerous time of year to paddle … it’s deceiving,” he said. “You’ve been stuck in the house all winter. Now the air temperatures are warm, it’s beautiful and you’re excited to go out.” But he warned, “Cold water, warm air temps and nighttime paddling in spring is not for the faint of heart.”

Fusco feels strongly that the Hudson River should never be taken lightly, least of all by inexperienced kayakers, even as its waters warm in summer. “On its calmest days it’s perfect for beginners,” he said. “But on the windy, choppy days, it’s for advanced, skilled paddlers only.”

‘Commanded by a fool’

Charles Rowe of the USCG also warned of man-made hazards on the river in addition to those posed by nature. “The Hudson is a busy waterway for commercial traffic,” including tugs, barges, container ships and oil tankers, he said. He pointed out that because kayaks are so low to the waterline, they are inherently difficult to see, especially in low-light conditions. His advice to kayakers: “The closer a commercial vessel approaches a kayak, the more limited is its vision. Steer way clear. This is not a collision you can win.”

Rowe is equally clear about his No. 1 safety rule. “No matter how experienced a kayaker may be, if he goes out without a life jacket, then he is aboard a craft commanded by a fool,” he said in an email to The Paper. 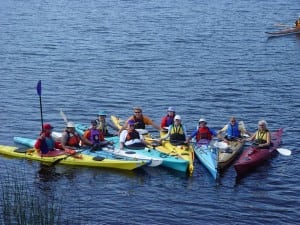 Join a paddling club with accredited instructors is a good way for new kayakers to educate themselves. (Photo courtesy ACA)

Fusco believes that when a kayaker fails to wear a PFD, it’s likely due to “overconfidence and lack of education about the real dangers ‘if’ something goes wrong.”

There is widespread agreement among experts regarding the most important tips they would give kayakers to help them stay safe while out on the water, although they may differ slightly as to the order. Brian Grahn, owner of Hudson River Expeditions in Cold Spring and an ACA coastal kayaking instructor, emphasizes one fundamental suggestion, one that is almost guaranteed to incorporate all the other important aspects of kayak safety. “Educate yourself,” Grahn said. “Sign up for classes with accredited instructors, join a paddling club with accredited instructors, paddle with experienced friends and learn rescue skills,” he said. “However you gain the awareness, knowledge and skills you need to safely enjoy kayaking — do it.” 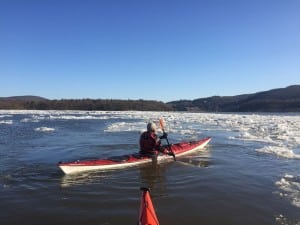 Cold water can be fatal. Kayakers must dress for the water temperature, not the weather. (Photo courtesy of Hudson River Expeditions)

The following are some of the key safety tips for kayakers, gathered from leading websites and from local kayakers Grahn, Fusco and Hartford:

For more information on kayak safety, visit the ACA website at americancanoe.org.