Former three-term Governor of New York and long-time Garrison resident George Elmer Pataki declared his candidacy for the Republican nomination for president of the United States Thursday (May 28) in Exeter, New Hampshire.

Pataki, who left the governor’s office in December 2007, has already visited New Hampshire as much or more than any other Republican candidate and chose Exeter because the town lays claim to the founding of the Republican Party by Amos Tuck in 1845 as part of an anti-slavery movement. Exeter is in the southeast part of the state near the seacoast and the Massachusetts state line. It is home to the Phillips Exeter Academy, a famed private high school.

In his speech, Pataki referenced Republicans Abraham Lincoln and Theodore Roosevelt, seldom invoked nowadays, but also Ronald Reagan, who is arguably the ideological founder of the contemporary Republican Party.

The New Hampshire presidential primary, always the first in the presidential season after the Iowa caucuses, will be February 2016.

Pataki is the 10th candidate to formally declare with perhaps an equal number of candidates still actively considering joining the race. The prospect of such a large field of candidates makes it a particularly daunting challenge for all but the best financed candidates.

In his speech and earlier in the day in a posted YouTube video, Pataki made reference to the events of Sept. 11, 2001, while he was governor, a centerpiece of his message of national unity for economic and social progress as well as a determination to confront the continuing threat of terrorism. The video ends with Pataki looking across at the gleaming, recently opened Freedom Tower, which replaced the fallen World Trade Center twin towers.

In his speech Pataki said: “While I saw the horror of Sept. 11 firsthand, in the days, weeks, and months that followed, I also saw the strength of America on display. For those months, we were not Republicans or Democrats, black or white, young or old. We were Americans. We had been attacked and we were going to stand together to show the world that we were unbowed, unafraid, and would come back stronger than ever. I completely reject the idea that we can only unite in adversity … we’re so much better than that. I know we have true greatness within us because I have seen it countless times.

“I know that working together, with the support of a government dedicated to restoring freedom rather than restraining it, we will once again astonish the world with what we accomplish.”

Pataki urged a buildup of American military forces and a commitment to use them where necessary to fight terrorism. Although he implied as much, he did stop just short of specifically committing to sending troops into the Middle East to fight the surging ISIS forces.

“We will make sure the No. 1 sponsor of state terror in the world, Iran, never has a nuclear weapon. We will provide whatever aid necessary to those already fighting ISIS on the ground to stop their barbarism and inhumanity. And yes, if necessary, American force will be used to actually defeat and destroy ISIS, so they can pose no threat to us here,” he said.

Protecting allies such as Israel and the Baltic states are a priority for Pataki. “Our allies must trust us. Our enemies must fear us. And they will,” he said.

At the outset of his speech, Pataki noted the presence of local supporters from Peekskill, where he once served as mayor. He said that many present had helped him get elected governor and re-elected two more times. Supporters of Pataki have noted on social media that he was not considered a serious candidate when he first ran against incumbent Gov. Mario Cuomo, pulling out an upset victory. 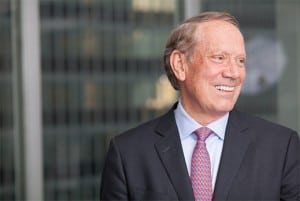 Pataki also emphasized that he was the son of immigrants to the United States who spoke no English. On immigration, he said he favored making sure the borders were secure and that people entered the country legally. He did not address the status of the several million immigrants already living in the country.

The governor said he grew up working hard on a small Peekskill-area farm with his brothers and cousins.

“Peekskill’s wealth was not in its money but in its people; black and white, Christian and Jew, both rural and urban at the same time. We weren’t wealthy, we weren’t well connected, we weren’t well known. And yet every one of us growing up in that small town believed in the American dream, believed in hard work, and believed in ourselves,” said Pataki.

In his speech, he said that a program of lowered taxes and reduced regulation could help revive the same aspirations to the American dream for a new generation of citizens.

He said if elected he would seek the repeal of “oppressive laws” such as Obama Care and Common Core. He did not elaborate on the nature of the oppression or what policies he would pursue in the areas of health care or education.

Taking aim at Congress, Pataki said he would advocate a total ban on former representatives lobbying Congress for any purpose. Currently, dozens of the most successful lobbyists are former members of the House and Senate.

Pataki also said he would pursue a rewrite of the federal tax code. “I’d throw out an incomprehensible tax code written by lawyers at the direction of lobbyists in the interests of the powerful and replace it with simpler, lower rates that are fair to us all,” he declared.

Although he spent time criticizing the size and expense of the federal government, he did not directly invoke President Obama’s name and only made a slight pejorative reference to Hillary Clinton.

Pataki was joined by his wife of 41 years, Libby, former First Lady of New York, who is more visible on the local scene here, serving currently as the Putnam County director of tourism.

The governor also introduced his four children: Emily, Teddy, Allison and Owen. Emily recently worked in the legal department of Bloomberg LLP and is currently a stay-at-home mother. Teddy served as a Marine officer in Iraq, works for the Knights of Columbus and is a father. Allison is a historical-fiction novelist and the New York Times bestselling author of The Traitor’s Wife and The Accidental Empress. Their youngest son, Owen, is an Army officer who recently returned from Afghanistan and will attend grad school for film.