Over the past 15 years, Beacon has become known as a world-class destination for art. But even art needs to get outside for some fresh air every once in a while.

That’s the impetus behind the Beacon 3D project, which officially kicks off its third year this Saturday (June 13). Mayor Randy Casale will be on hand to cut the ribbon at 2 Way Brewing Company, 18 West Main St., where Franc Palaia’s Solar Windows sculpture sits outside and marks the first point in the mile-long outdoor sculpture trail across Beacon. There will be pizza, lemonade, a cash bar, and many of the artists themselves in attendance. 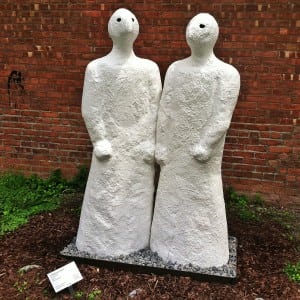 This year’s iteration of Beacon 3D features 20 sculptures at 15 locations, ranging from the playful to the inspirational to the macabre. It’s a marked change from when the program began with just three sculptures at the vacant lot on Cross Street and Main Street. Back then, Eleni Smolen was just looking for a way to honor Beacon’s centennial. The reaction was positive enough that Smolen decided to make it an annual project and returned in 2014 with 12 sculptures spread out at six different locations along Main Street. That year, the project won the Dutchess County Executive’s Award for Art in Public Places.

“I didn’t anticipate how well received it would be,” Smolen said. “But it made much more of an impact to have the pieces all along Main Street instead of having them clumped at one location.”

This year’s project unofficially began a few weeks ago as the sculptures began popping up. All of the sculptures are for sale with 100 percent of the proceeds going to the artists. For many of the artists, Beacon 3D affords the opportunity to take their work in a new direction.

Take Jon Reichert, for example. He’d been playing around with small sculptures of donuts, but Smolen encouraged him to think bigger and consider taking part in Beacon 3D.

“I’ve been making the small sculptures for a while and was excited to try something new,” Reichert said. “Beacon 3D was a good deadline to focus on and just make the sculpture already.” 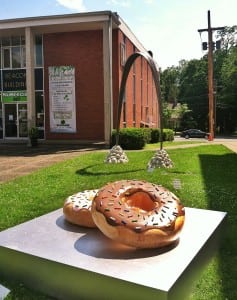 “In The Round” by Jon Reichert in the foreground, “Grounded Rainbow” by Lori Merhige in the background.

Reichert’s In The Round piece consists of two large-scale cartoonishly colored donuts laid out at 427 Main St. There, it’s perfectly paired with the playful, childlike arch of Lori Merhige’s Grounded Rainbow.

Reichert admits that while a project like Beacon 3D carries with it some inherent risk, the rewards afforded by the project far outweigh the negatives.

“It’s more vulnerable to everything,” he said. “I worry about it holding up to weather or vandalism or whatever. However I think it’s worth the risk. Someone, anyone, can just walk down a sidewalk and see it. Public art can be very refreshing that way.”

Not all of the sculptures are so light-hearted. Rosemarie Oakman’s Security Blanket, located outside the Key Food store at 268 Main St., is part of the artist’s cross-generational Alzheimer’s Glass and Iron Project. The rusty house of Security Blanket is based on an iron oxide painting made by a woman suffering from Alzheimer’s disease. Much as iron fights to maintain its structure and integrity while being ravaged by rust, Security Blanket explores the ways in which those suffering from Alzheimer’s seek to preserve their own memories even as they begin to succumb to the effects of the disease.

And some of the sculptures combine the ominous with the whimsical. Insun Kim’s Doggie-Day Afternoon at the corner of Cliff and DeWindt Streets, features an eerie looking mechanical monstrosity that seems to churn solely for the benefit of the sweetly oblivious dog that sits on a swing between its massive gears.

Although Smolen would like to continue to expand the program in the years to come, she notes that there are only a certain number of suitable, open spaces for sculptures to be mounted along Main. On the other hand, if this project has taught her anything, it’s that Beacon doesn’t tend to acknowledge its limitations. 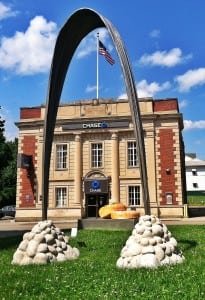 “Grounded Rainbow” by Lori Merhige in the foreground, ”In The Round” by Jon Reichert in the background.

“It’s a very active community,” she said. “A lot of volunteers and all of the site sponsors have really stepped up. I haven’t had anyone say ‘no’ yet. Everyone I’ve asked has said ‘yes, what can we do?’ I don’t know that every community is like that. I think Beacon is very extraordinary that way.”

Those who miss the ribbon cutting this weekend needn’t worry. The 20 sculptures that make up Beacon 3D will remain in place until Oct. 15 for the public to enjoy.

“The biggest thrill for me is when I’m going down Main Street and I see people taking pictures of themselves with the sculptures,” Smolen said. “It’s just such a casual and visual confirmation that people are responding to what we’re putting out there.”