In a game that represented a tuneup for two teams destined to meet the next week in the first round of the Philipstown Little League Minors Playoffs, the Giants and the Nationals played to a nail-biting last-out-at-home-plate 10-9 game last Saturday (June 6). 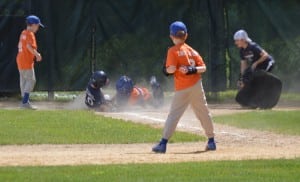 Paced by home runs from Tommy Tucker and Julian Ambrose, the Giants were leading 7-2 in the top of the sixth when the Nationals rallied for eight runs to take a 10-7 lead. In the bottom of the sixth the Giants would not go quietly. Conrad White knocked in Tommy Tucker to bring the score to 10-8. With Conrad and James Wynn on base and two outs, Scott Bailey got a hit past first, driving in Conrad as James raced home with the potential tying run. 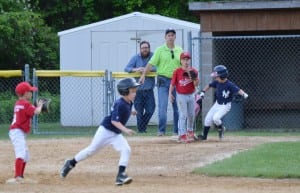 Philipstown Little League Yankees round bases against Nationals in 11-0 win.

The ball and James arrived at home plate at the same time, as James missed the plate and catcher Jake Hotaling missed the tag. In a fitting finish to a dramatic game, foreshadowing a great playoff game to come during the next week, Jake tagged out James before he could reach the plate, preserving the Nationals’ 10-9 victory.