The distance between the West African nation of Sierra Leone and Beacon, New York, is not measurable in kilometers or miles. It’s a distance traversing just about every gulf imaginable, yet it will be bridged, in a small but important way, by the Sierra Leone Refugee All-Stars (SLRA), a band formed in the same dire circumstances that exist today across the globe: out of a civil war, with displacement and tragedy far beyond the comprehension of both those directly affected by it and those who learn of it from afar.

The band comes to Beacon as the headline act of the 2015 Riverfest, which will be held on June 28 from noon until 8 p.m. They tour the world (the Riverfest performance, along with one in the Bronx, is sandwiched between shows on the island of Réunion, in the Indian Ocean, and a string of European dates) and were the subject of an eponymous 2005 documentary. 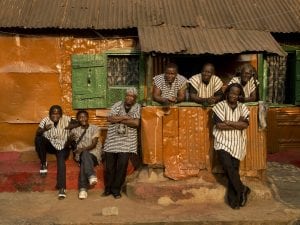 According to information on websites for the band as well as the documentary, from 1991 to 2002 the government and rebel factions engaged in a brutal civil war, replete with still-topical atrocities: the killing and maiming of civilians, rape, forced conscription and the like. This resulted in hundreds of thousands of Sierra Leonean citizens fleeing north and east to the larger nation of Guinea, which half encircles it. There, in a familiar plight, many wound up in fetid refugee camps, lacking in every basic resource.

Band member Reuben Koroma and his wife Grace had an unexpected reunion with fellow musician Franco John Langba, whom they knew from the prewar music scene in Freetown, Sierra Leone’s capital. They began making music for their fellow refugees, and at another camp to which they were later relocated, they were joined by three other refugee musicians.

Their sounds came from beat-up instruments and a rusted-out sound system donated by a Canadian relief agency. It was at that second camp that they also met San Francisco–based filmmakers Zach Niles and Banker White, who, having traveled extensively in Africa, were “looking for stories that would balance the Western media’s focus on the region’s violence with a sense of African society’s beauty and resilience,” according their notes on their film.

Inspired by the band’s story, Niles and White ended up following them for three years as they moved from camp to camp, under the auspices of the United Nations refugee agency, where their performances were received rapturously.

After the war ended, the All-Stars returned to Sierra Leone, and the group began rotating members in and out. According to their website, “It was there in the tin-roofed shacks of Freetown’s ghettos that Sierra Leone’s Refugee All-Stars recorded the tracks that ended up, along with unplugged recordings made in the refugee camps, being the basis for their debut album, Living Like a Refugee, which was released on the label Anti in 2006.”

The film follows the All-Stars on their tours of the camps and continues over the following three years, as the “members worked on their songs, wrestled with the lasting traumas of the war and ultimately returned to a very scarred Freetown, under an uneasy peace settlement, to record their first album,” according to film notes.

The band’s profile has grown steadily higher, as has the duration and reach of their touring. Over the past 10 years, they have traveled the world for events, including concerts at Central Park SummerStage, Japan’s Fuji Rock Festival and the Bonnaroo Music and Arts Festival. They contributed a song to the Blood Diamond film soundtrack and participated in the U2 tribute album In the Name of Love: Africa Celebrates U2.

Despite this, the band’s collective history is never out of their thoughts. “It’s been a long struggle out of the war, out of miserable conditions,” noted Koroma on their website. “We try to bring out sensitive issues that are affecting the world. It is all of our responsibility that the masses are suffering. We bring our positive messages into the world so we can expect a positive change in the world. And, most importantly, bring about peace.”

On their recently released fourth album, Libation, the All-Stars returned to a more acoustic, unplugged sound, harking back to the music they played in the camps. According to notes on the site, “The band also made a concerted effort to mine the riches of Sierra Leonean folklore, basing their songs on the highlife, maringa and palm wine styles that the band members listened to in their youth but are not heard as often today, as well as baskeda and gumbe, the Sierra Leonean relatives of reggae and soukous respectively.”

Riverfest organizer Stephen Clair said the All-Stars embody the musical spirit of the event, which is returning to Beacon’s waterfront after a year’s hiatus. “From the beginning there’s almost been a subtitle for Riverfest: ‘Indie Rock and World Music festival.’ We’ve sought out explosive bands composed of jazz and rock musicians playing hybridized versions of, say, Cuban or Middle Eastern music.”

Others in the Riverfest lineup this year are (with Clair’s brief descriptions):

Decora: “He had a band called the Rednecks Poetry Squad and has played around a lot; I think of him as kind of a 21st-century response to Pete Seeger, with a powerful message for good, a community activist, talented and charismatic.”

Breakfast in Fur: “They’re from New Paltz and busting out nationally — have signed with the Bar None record label.”

Jenny Dee and the Deelinquents – “A 10-piece band from Boston that sort of has a ’60s girl-group thing going on.” Lead vocalist Jen D’Angora was voted Female Vocalist of the Year at the 2010 Boston Music Awards.

Tickets for the documentary screening are $10 at the door, with all proceeds benefiting Riverfest. Tickets for Riverfest, which cost $15 through June 27 and $25 at the gates on the day of, are available through beaconriverfest.org.