Cold Spring became “Hollywood Northeast” on Monday (June 8) as the hit Showtime television series The Affair came to town to shoot a number of scenes along Main Street. Location Scout Riley Malone told The Paper that crews arrived in Cold Spring around 5 o’clock that morning and didn’t leave the village until about 8:30 in the evening. 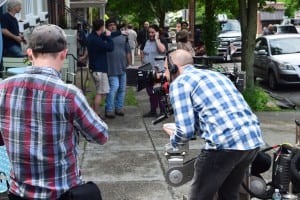 Shouts of ”We’re rolling” brought quiet to the set throughout the day. The more than 75 crew members began arriving in Cold Spring at 5 a.m.

Seventy-five to 100 actors, extras, videographers, lighting and sound technicians, production managers and property assistants turned Main Street into one long stage. Scenes were shot in five different locales, including inside The Foundry Cafe, where the interior was given a facelift in the days prior to shooting, courtesy of Showtime. The episode will air this fall as part of The Affair’s second season. The series stars Dominic West, Ruth Wilson, Maura Tierney and Joshua Jackson. 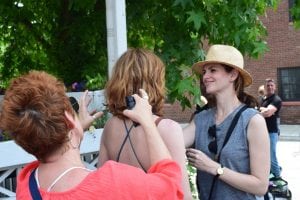 An actress receives a last-minute touch-up to hair and makeup just before a scene is shot. 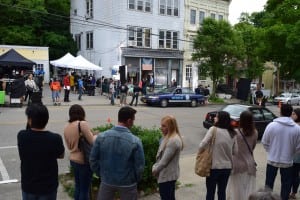 Acting extras (foreground) await their turn to walk through one of the Main Street scenes.