Daily driving on a winding, steep dirt road allows me a lot of time to observe roadside plants and I take stock season after season and year after year of changes. This year I’m noticing a lot of spreading of a nasty invader, Phragmites australis, or the common reed, in surprising areas that are drier than its typical wetland habitat. There are patches along the road of 10 stalks or fewer in some places and then larger patches of 20 or so stalks showing up in small areas where drainage collects. Right now they are 3- to 4-foot-tall stalks with leaves, but soon they’ll become the more recognizable frond-topped reeds delicately waving in the breeze.

There’s a marsh near the west end of East Mountain that phragmites have been colonizing for years now, but it’s just been in the past two years that I’ve noticed their upward movement. Phragmites spread via seeds and rhizomes. In the case of the roadside patches that are appearing, I’m guessing that the machinery that’s used by the highway crews to maintain the road is moving it around. The marshland has phragmites at the road edge and their seeds are being spread as work proceeds. 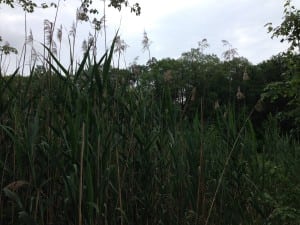 Phragmites are found throughout the eastern U.S. and in some areas of the west and have been around probably since the 1800s, brought here attached to ships. As of this year, the New York State Department of Environmental Conservation banned them from being sold, imported, purchased or introduced and Philipstown already had regulations on the books. In many high-value sites, like the Chesapeake Bay or locally Constitution Marsh, battling phragmites has been a long and costly endeavor.

When phragmites are introduced into a wetland, they can quickly dominate and form a dense stand that crowds out and blocks light from any other wetland plants. It affects the movement of water, and drastically alters wildlife habitat. Eric Lind, director of the Constitution Marsh Audubon Center and Sanctuary, said: “We took a more proactive approach in controlling it. Research on tidal marshes with comparative bird studies showed that bird populations diminish in phragmites-dominated marshes. We knew we’d improve something measurable for the bird population here.”

In the marsh, they acted on it in the early stage and were successful in restoring the areas where they could remove it. Getting rid of phragmites is no easy task. The root systems can be several feet into the ground and the reeds can grow to 15 feet high. If there are even small rhizomes left behind, it can grow back.

Acting immediately when it shows up is the best chance of effectively getting rid of or controlling phragmites. In a single summer, phragmites rhizomes can spread up to 10 feet through an area by runners.

Herbicides are one method of killing it, but must be applied by a professional if used near or in a wetland. It’s the law. There can be serious consequences for aquatic plants and animals, birds and other wildlife if herbicides are applied incorrectly. There are also certain stages of the phragmites’ life cycle when herbicides can be more effective as well, and a professional will know how and when to do it.

At Constitution Marsh, Lind said: “We’ve tried multiple methods. Our main approach is called solarization, which is flattening it and then covering it with large heavy-duty black tarps. It overheats it and prevents it from photosynthesizing.” Since this method will kill all the vegetation that tarps cover, the marsh used herbicides on small patches where phragmites were mixed in with good, native plants they wanted to preserve. Lind stressed that it was best to take action early and that in their case, the goal was to prevent the plant from spreading and they had to balance the work and expense involved.

The forested, open land in Philipstown means that there are large swathes of land that no one seems to tend. It’s nice that all the forests haven’t been cleared for development, but it also means that lots of land isn’t managed for invasive plants. It’s different than controlling crabgrass in the lawn that you look at from the patio or windows. It’s space that is left to do whatever it will do and unfortunately, that means invasive plants are taking over. Have any experiments or stories to share about battles with invasive plants? Share them with [email protected]

One thought on “Roots and Shoots: Phragmites Are Moving Up the Mountain”