The City of Beacon has changed so much in the past 15 years that it’s not unusual to find former residents slowly walking down Main Street, marveling at the various improvements. But a recent visit from one former resident was about more than reminiscing.

Dutchess County Executive Marc Molinaro, along with Deputy Commissioner of Strategic Planning and Economic Development Ron Hicks and Dutchess County Legislator April Farley, visited Beacon at the request of Mayor Randy Casale and Councilman Ali Muhammad. Molinaro lived in Beacon during a time when much of its Main Street was boarded up. Today, Main Street sees a constant stream of foot traffic for much of its mile-long stretch. But a few gaps still remain, and that was why Casale asked the county executive to visit. They met in front of the Beacon Center building at 223 Main St., which features many county offices — and an expansive street-side parking lot.

“When we redid our zoning plan for central Main Street we said we should infill parking lots,” explained Casale to The Paper. “We had a developer that said he’d be interested in doing something with the parking lot of the Beacon Center building if we’d consider infilling it.” But the mayor would also like to see more changes come to the Beacon Center. “Ever since I’ve been elected, I’ve been thinking that our City Hall should be up on Main Street,” he said. 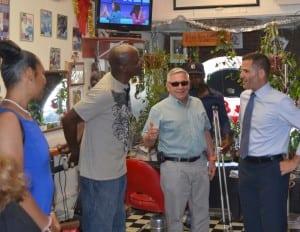 Currently, Beacon’s City Hall sits marooned in between Main Street and the waterfront, tucked into a slope. Countless people drive by it every day on Route 9D without even realizing it’s there. Casale said he’s interested in switching as many county offices as possible down to the City Hall building and having the city’s offices up in the Beacon Center. “That way, people could visit us on foot, and when they leave us they’re right out there in our main business district,” he said.

Both Molinaro and Casale stressed that the Beacon Center branch of the Department of Motor Vehicles (DMV), beloved by locals for its unusually high degree of efficiency, would remain in place. Casale also said that preliminary studies have suggested that the lost parking spaces could be compensated for by expanding the parking lot behind the building.

While no timetable is in place for the proposed move — Casale said he would first have to make sure the switch would work before moving forward — infilling the parking lot at the center would present additional advantages. “It would put more people and more business on our Main Street and give us a little more tax base.”

From the center, the group walked down the west end of Main Street, visiting such businesses as the Main Street Beauty Club, Beacon Bread Company, Hudson Beach Glass and Tito Santana Taqueria. Molinaro asked one business owner, who has owned businesses in differing counties before, what the secret to Main Street’s success is.

“He looked at me and said, ‘The difference is that you’re here. In this community, leadership participates in strengthening its business districts,’” recalled Molinaro. “As a county executive, that’s what you want to hear. That means that business owners see that we’re invested in their growth, their prosperity and their own community investment.” 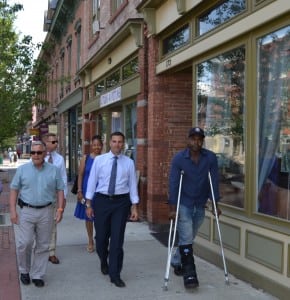 After visiting the west end of Main, Molinaro and Casale traveled to Ella’s Bellas on the east end at the request of Councilman Muhammad. There, with a group of young Beaconites and representatives from the environmental group Riverkeeper, they discussed such issues as mental health programs, the prison system in Dutchess County and various proposed environmental initiatives.

Muhammad told The Paper that he’s invited Molinaro back for another visit to the east end of Main Street next month. There, he plans on showing the county executive how such businesses as the Roundhouse, the Hop and Dogwood are turning the east end into a lively dining and entertainment district; he wants to follow that with a public meeting at Green Street Park.

While the day ended on a high note, lifelong Beacon resident Casale was particularly pleased to see the city receive some attention from the county executive.

“When I was the highway superintendent in Beacon, I always thought we were the forgotten child of the county, and I used to joke with the public officials at the time that we should secede from Dutchess County and join Putnam,” he said with a laugh. “Then instead of being the rear end of Dutchess we’d be the head of Putnam! So it felt so good to have him come here and talk to some of our residents and business owners.”