Though combining thoughts of “Argentina” and “food and drink” may immediately summon up succulent steaks, grilled on a parrilla, and drinking gourds filled with yerba maté leaves, those who have been to that very southern of South American nations, home to a large population of Italian émigrés, pre- and post–World War II, will likely remember more than a passing acquaintance with the many pastry and coffee shops found on nearly every street in the major cities and towns there. Now this town has one, as Rincon Argentina opens its puertas down near the Hudson River on Cold Spring’s lower Main Street, 21 Main, to be exact. 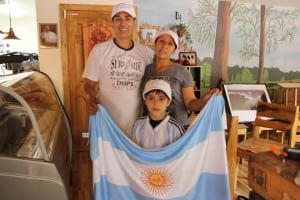 Rincon Argentino’s proprietors, Marco and Ramona Antonio, with their son Ivan, holding up an Argentinian flag at their new café.

Owners Marcos and Ramona Antonio are proud Argentines — he being more of a hybrid Argentinian-American: born in Santa Fe province, north of Buenos Aires, but coming to the United States at the age of 2 — and happy to have settled here, hence the two national flags on display. Fittingly, on Fourth of July weekend, they opened their café, serving those all-American, all-Argentinian staples of espresso and desserts. The espresso drinks include all the variants: cappuccinos, lattes, etc., and the desserts range from gelato to butter cookies and pastries galore.

Eventually, the Antonios hope to further specialize and offer more specifically Argentine specialties, including empanadas, fried dough and, who knows, maybe even some chimichurri steak someday, but for now, “because of the difficulties of processing food, we’re starting with coffee, and playing it by ear, seeing how things come along,” Marcos said. 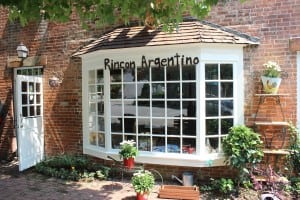 After moving to the States, Marcos grew up in the Bronx, then Mahopac and Carmel, and worked as a school bus driver. He also returned, for a spell, to Argentina, where he operated a deli. Time spent working in Garrison introduced him to Cold Spring, and the couple, along with their now 7-year-old son Ivan, settled here three years ago. They wished to open up a place for years; opportunity knocked when the Antonios met their current landlord and worked out a deal in which they would renovate the space and then launch their business out of it.

For the past three months they have done just that, crafting new floors and walls, obtaining all the necessary permits and then painting the room with lively, colorful murals depicting the Argentinian countryside on one, and the famed tango singer, Carlos Gardel, emblematic of Argentine culture, on the other. Another more recently prominent Argentinian, Buenos Aires–born Pope Francis, is honored with a framed photograph displayed on a wall. 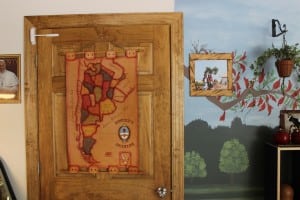 A portrait of Pope Francis, a map of Argentina and a hand-painted mural depicting the countryside form part of the decor of Rincon Argentino.

The interior decor has largely been handcrafted, with Marcos building all of the attractive chairs and tables and shelving himself. Displays of Argentinian artisan crafts line the window seating area, and traditional maté containers fill a cabinet. Outside, flower containers make for a welcoming entryway along Main Street. It’s important to the Antonios to operate, as much as possible, in harmony with the environment: “We’ve built everything out of natural, recycled materials,” Marcos said. “That’s the way we are, and we feel most people also want it that way.”

What they want most for their new place, is, according to Marcos, for it to be a “cozy place for people to sit down before heading to the river. Cold Spring has given us a comfortable place to live in, and I’d like to add my grain of salt to make Cold Spring just a little different.” 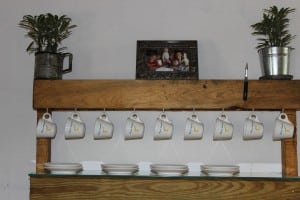 Rincon Argentino’s display of saucers and cups, ready to be filled with lattes and more

Rincon Argentino (rincon is loosely defined as a corner, nook or special place) has expected opening hours, subject to tinkering, on weekdays from 9 a.m. to noon and noon to 6 p.m. and weekends from 7 a.m. to 7 p.m. For more information, call 914-482-4795.