‘If you think you don’t like jazz, maybe you haven’t heard the right kind.’

Beacon obviously loves its festivals. There’s the Strawberry Festival, the Pumpkin Festival, Corn Festival, RiverFest and more, but there hasn’t been a jazz festival until now, when the very first Beacon Jazz Festival comes to the Pete and Toshi Seeger Riverfront Park on Saturday, July 25, from noon to 6 p.m.

Along with a lineup of top-flight, New York–based musicians, many with long associations with Beacon and the Hudson Valley, the festival will also spotlight the burgeoning craft distilleries of the area, with offerings from regional breweries, wineries and cideries. Foodies will have their appetites whetted by an array of locally made goods to eat, all prepared by area chefs. Plenty of nonalcoholic liquid refreshments will be available as well. Some of the local Beacon businesses providing victuals are More Good, Tito Santana, Beacon Bread and the Hop Express, among others. 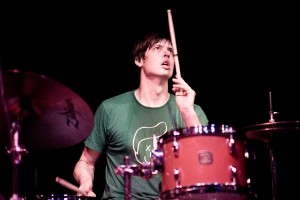 Drummer Ches Smith, who will perform as part of the Sun of Goldfinger trio, at the inaugural Beacon Jazz Festival

All attending are urged to bring blankets and sunscreen and are welcomed to bring their own food as well as availing themselves of the vendors. General admission is $34 when purchased up until a week prior to the event and $45 at the gate. Special VIP tickets, which cost $65, will afford seating closer to the stage and some festival swag, including a whiskey glass, event T-shirt and tote bag. Beacon DJ Grady Salter will be spinning classic jazz selections all day between acts. Everyone is encouraged to take the train, due to the limited parking nearby — or just plan on walking a bit.

The festival, a coproduction of restaurateur Kamel Jamal and “hopstologist” Justin Riccobono, charged James Keepnews with assembling the musical lineup, with a mandate to think regionally — and to put it all together quickly, since the Beacon City Council approved the festival just this past May.

Keepnews’ first thoughts went to Ossining trumpeter/cornetist Ted Daniel, who heads the International Brass and Membrane Corps, whom Keepnews dubs “a guy that serious jazz players come out and see. He plays early jazz updated with instruments like tuba and violin, and it winds up sounding like something you might have heard on Beale Street in 1915, but he’s embracing it and making it sound new.” He will be joined by Charles Burnham on violin, Joseph Daley on tuba and Newman Taylor Baker on drums and percussion.

Sun of Goldfinger will also be on hand, putting forth their contemporary spin on things. Headed up by Tim Berne, whom Keepnews describes as “at the top of the tree in modern jazz,” the group includes guitarist and Hudson Valley resident David Torn and drummer Ches Smith. “This is going to be a little ‘out there,’” Keepnews said. “It’s going to have an edge to it, but I think people are going to understand where they’re coming from right away, and I think it will make an exciting conclusion to the festival.” 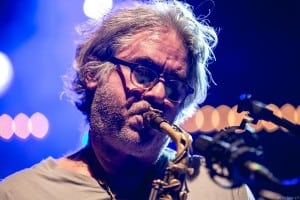 Saxophonist Tim Berne, who will perform as part of the Sun of Goldfinger trio at the inaugural Beacon Jazz Festival

Keepnews asked saxophonist Mike Dopazo, who performs frequently in Beacon, to be the front man for the Hudson Valley All-Stars, who will open up the show. “He’s been working really hard, under his own initiative, in Beacon for many years, and deserves this place on the bill, and the other guys are not lacking either.”

These “other guys” include trombonist Joe Fiedler, who has performed with Cecil Taylor and Eddie Palmieri; saxophonists Eric Person — who has played with the World Saxophone Quartet and released multiple CDs — and Josh Rutner, who leads a Brooklyn ensemble; and, per Keepnews, the “in-demand, superb” bassist Robert Kopec, who’s been leading a big band of his own. Drummer Jon Doty rounds out the group.

Also on the bill is drummer George Coleman Jr.’s Rivington Project. Son of the “legendary saxophonist,” as described by Keepnews, “he has insane powers as a drummer.” Coleman will lead an organ trio consisting of saxophonist Mike DiRubbo and organist Brian Charette.

The Karl Berger/Ingrid Sertso Quintet, with guitarist Kenny Wessel, bassist Ken Filiano and drummer Warren Smith, rounds things out. Vibraphonist Berger and vocalist Sertso were co-founders with Ornette Coleman of the Woodstock school and multicultural laboratory Creative Music Studio. They will be bringing in, according to Keepnews, “world music with African traditions, synthesized with sensibilities of the ’70s, improv driving it all.”

Festival co-producer Riccobono’s love of jazz developed during the 10 years he lived in New York City’s West Village, regularly hitting clubs like Smalls, Fat Cats and the Vanguard. Upon his move to Beacon in 2007 (he’s a Fishkill native), he found little jazz to be heard outside of Marlboro’s the Falcon.

“Beacon wasn’t at capacity [in terms of people who would support a festival of this kind] until recently,” he explained. This year finally felt right, and Riccobono approached Jamal, who reacted, “I love it — let’s do it.” Finding a festival gap in July, Riccobono, whose “regular job by day is consultant to hop farms,” and Jamal agreed it needed to thread together more than just music, and that prompted the notion of a tasting event for distilleries. “By mixing it in with jazz, which it goes well with traditionally, it becomes a real event — and I’m not sure if this has ever been done before,” Riccobono said. Twelve distilleries will be in attendance, with unlimited tastings offered. 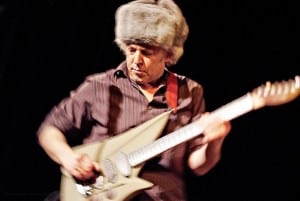 Guitarist David Torn, who will perform as part of the Sun of Goldfinger Trio at the inaugural Beacon Jazz Festival

Jamal said there have “been opportunities before to do this type of festival, but the timing wasn’t right. This is the best chance to highlight what’s out there in jazz and move forward. We also wanted to include as many businesses as possible in Beacon. As Saturday is their ‘bread and butter’ day, many were unable to commit this first time, so as we also wanted to give back to Beacon, we suggested that they host the after-parties, for people to trickle into after they leave the festival to places like Quinn’s and others.”

Jamal added that there’s been a concerted effort to avoid the usual fried-food festival fare. “It’s about the music, and with that comes food, so we’re going to have things like mussel-bakes and pulled pork along with good, homemade hot dogs, sausage and peppers. We’re going for a quality menu, recruiting chefs who know how to cook at a high volume.” The main sponsor is Jamal’s own Tito Santana.

The organizers hope to attract a cross section of people of different backgrounds, ages and interests. Although they’ve done a lot of marketing through jazz-related publications in the city, they hope to convert some others, perhaps resistant to or simply unfamiliar with the musical form.

“If you think you don’t like jazz, maybe you haven’t heard the right kind. With this performance you will be able to explore and get to sample the breadth of a century,” Keepnews said, acknowledging that if one goes “strictly by statistics, jazz is one of the poorest selling” music genres today. “It’s very discouraging, because I feel it’s one of the most exciting times for music in general. At the same time there’s an explosion of jazz degrees in conservatories and universities, so there are thousands of kids playing the music pretty well. What is the solution? It’s something classical music has to face, too. … There are a variety of ways of looking at it. Does it shrink and reach a more specialized audience? Yes, but at places like Quinn’s there’s a younger, boisterous crowd which doesn’t leave when people start playing.”

Keepnews stated he is “proud that this festival has uncompromising artists — very serious artists that people are going to have a lot of fun hearing.”

Tickets and further details are available through the festival website, beaconjazz.com.