12th annual event to raise funds for the River Pool

The late folk icon Pete Seeger left behind a rich legacy of songs and deeds that will stand the test of time. But of all of his contributions to the world, only one of them will cool you off on a hot Hudson Valley day.

That’s the River Pool in Beacon, which just opened for its 9th full season at the end of June. Free to all, the 20 feet in diameter floating structure can be found down at Pete and Toshi Seeger Riverfront Park and is open from Tuesdays through Sundays, noon to 6 p.m., if the weather allows.

The idea for the pool originally came to Seeger when he learned about the mighty Hudson River pools that used to be found off the docks of Manhattan at the turn of the last century. “He had worked so tirelessly to clean up the Hudson,” said Nita Sutton. “So he thought that all people, regardless of their skill level or age, should now be able to enjoy swimming in the river.”

With a design in hand from architect Meta Brunzema, Seeger and his ever-willing compatriots began to think of ways to raise enough money to build the structure and fund a full season of life guards. That’s when the idea arose in 2003 to plan a swim across the mile-long stretch of the Hudson from Newburgh to Beacon. 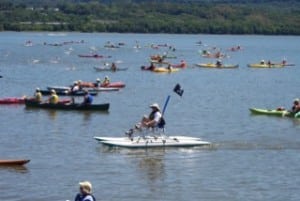 Kayakers escort swimmers across the Hudson during a previous running of the Great Newburgh to Beacon Hudson River Swim. (Photo by Michelle Marcus)

The swim became a tradition, and this year the 12th Annual Great Newburgh to Beacon Hudson River Swim will begin on Saturday, July 18 (with a rain date of July 19) when approximately 200 swimmers from all over the world splash into the river from the Newburgh Marina and make their way to the Beacon Institute’s dock just south of the Beacon Sloop Club. Along the way they’ll be escorted by between 80 to 100 kayakers who are there to assist anyone who needs to take a break. And the Coast Guard will halt river traffic in both directions. “To have traffic stopped on the Hudson so that you can swim across is an amazing opportunity,” said Sutton, who serves as the event coordinator and has done the swim herself many times.

Michael Gersh, who serves as the president of the River Pool’s board, has also done the swim several times. He’s sitting the swim out this year, but he’ll enjoy being a spectator from the Beacon side of the river all the same. “The smiles on   the swimmers’ faces when they get out of the river on the Beacon side is just really cool to watch,” he said. “You can just see how proud they are of themselves. There’s a great reward in just crossing such a famous body of water.”

Both Sutton and Gersh have the same advice for those who are doing the swim: Take your time.

“Don’t rush, it’s not a race,” said Gersh. “Some people do it very fast and they get across in under half an hour. If that’s what you want to do, that’s fine. But most people just do it at their own pace and enjoy it.”

“Sometimes there’s a current you have to fight, and it can make it feel like more than a mile,” said Sutton. “It’s about tenacity.”

“If you do need to rest, alert a kayaker and grab onto a kayak in the proper matter, two hands on the front of the kayak,” added Gersh. “Or what I’ve done some times before is just float. I’ll turn over on my back and just look up at the sky.” 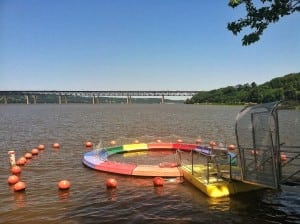 The Beacon River Pool (photo by B. Cronin)

While not everyone may be up for the mile-long swim this weekend, they can at least jump into the River Pool itself after the swim is over. And if they do, they can thank those who took part in the big swim across the river for making another season of the pool possible. Each swimmer, in addition to a $60 registration fee, pledges to raise at least $100 to go towards the pool’s $40,000 annual budget. For Gersh, that’s a small price to pay for something so unique.

“There’s nothing else in the world quite like it,” he said. “It allows people to actually swim in the river. There are beaches along the river, but this is a lot safer because of the netting at the bottom. It’s a very safe structure. We’re going to hit the 10,000 swimmer mark this summer and we’ve never had a major problem.” Also the fact that the water is constantly flowing through it, it’s not like a lake where the water is stagnant so if there’s any kind of bacteria around it’s not going to go away. With the River Pool, the water is constantly flowing through it.”

For more information about the River Pool or the Great Newburgh to Beacon Hudson River Swim, visit riverpool.org.

One thought on “Newburgh-Beacon River Swim”