It occurs more often than expected. Unsuspectingly mention that one has just seen a production of Shakespeare’s The Winter’s Tale to someone familiar with the breadth of the Bard’s work and watch their face melt into what a coo translates to, visually, as they say, almost conspiratorially, “I love that play. It’s unlike any of his others.”

More frequently, the response is different, more in the vein of: “Now, which one is that one? I don’t think I’ve seen it — is it a comedy or a tragedy?” The answer to the question is, variously, depending on one’s perspective, truly “both” but also subject to one’s own interpretation, much as tales, fairy and otherwise, tend to be. Literally divided into halves of opposite, though conjoined, tones, it has been said that the play, part of the Hudson Valley Shakespeare Festival’s (HVSF) current season, is akin to two facing pages in a book, the second half contrasting with and completing the first. 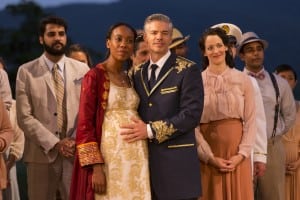 It’s not that the play is never done. A quick search of recent productions yielded many, at venues like the McCarter, Old Globe, the Pearl and Yale Rep. On Shakespeare’s home turf, Kenneth Branagh’s theater company just mounted a version, while choreographer of the moment Christopher Wheeldon created a 2014 adaptation for the Royal Ballet. But the play, one of Shakespeare’s last, perched between Cymbeline and The Tempest, presumably based on Robert Greene’s 1588 romantic prose novel Pandosto: The Triumph of Time, presents particular challenges for directors and, thus, audiences.

Assuming Pandosto as the source material, it is a darker piece, which Shakespeare lightened in tone, in parts. So although the play is quite overtly structured with a “serious, tragic” first act set in Sicilia and a “comedic” second set in (an incongruously coastal) Bohemia, they bleed into each other, often in oblique, surely intentional, ways. 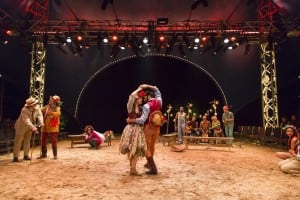 Susannah Millonzi and Babak Tafti, center, in ”The Winter’s Tale”

In nearly every description of The Winter’s Tale, a handful of words come up time and again: reconciliation, jealousy, rusticity, redemption and, above all, magic and magical.

These, along with such familiar ingredients in Shakespeare’s theatrical stew as disguised identity, banishment, parent/child betrayal, sly pilferers, resourceful servants and henchmen, both outraged and courageous, navigate, nonetheless, a storyline that has more fable in it than one associates with the Bard. As HVSF’s artistic director Davis McCallum, who directed this production — his first directorial effort at the festival since arriving in 2014, describes in the program:

I like to imagine Shakespeare, in writing The Winter’s Tale, deliberately setting himself the challenge of creating a play so like an old tale that [quoting from the play] ‘the verity of it were in strong suspicion.’ And not only does he choose to attempt this Mission Impossible, he does so with a kind of playful bravado and relish. Scene after scene, he pushes credulity to the point of breaking, and then pushes it one step further, based on a profound conviction that there’s nothing — no nothing! — that the theater cannot summon into vivid life when great writing and inspired acting coincide with the imagination of a willing audience. 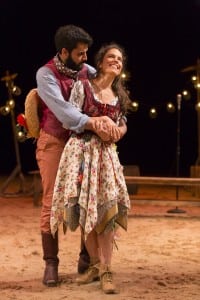 Babak Tafti and Susannah Millonzi in ”The Winter’s Tale”

McCallum also alludes to the notion of time’s wondrously irrational power to heal, as evidenced in the text, and to the audience’s “innate longing to believe in something with the unadulterated faith of a child.” In watching The Winter’s Tale, almost from the start, one has to suspend a purely logical analysis. Even the extreme jealousy that spins the tale into action provokes the question, “But why is he so irrational … when he was just, moments ago, so not like that?” which has to be put aside for the audience to paddle into the surf of the play and stay there.

The denouement demands an even greater suspension of disbelief (no spoilers here, but it is quite unanticipated, and not one of those chestnuts Shakespeare frequently drew out of his vest pocket, though there is a bit of revelation before this that, satisfactorily for happy-ending aficionados, is). This surrendering to the magic of the play is key to being moved by it.

McCallum had multiple reasons for selecting The Winter’s Tale as his first production at HVSF:

I chose it because I love it, and because I thought that it was a great centerpiece in a season curated around the idea of tales and storytelling. Although it is one of Shakespeare’s greatest plays, it’s not super-familiar to most audience members, and that was appealing, too; HVSF’s last production was in 1998. There are also so many different kinds of moments in The Winter’s Tale — from the ridiculous to the harrowing to the sublime. I had the instinct that the broad canvas of the play would work well under the big tent, with the vast backdrop of the Hudson River. I kind of thought, ‘Go big, or go home.’

The Winter’s Tale is being performed now through the end of August, in repertory, by the HVSF at Boscobel. For tickets and additional information, visit hvshakespeare.org or phone 845-265-9575.

Read a profile of Alex Danilov, a Cold Spring fifth-grader who plays Mamillius.