Turtles in Cold Spring played a key role in research project that spans the world recently, or more precisely, the turtle’s parasites did. South African scientist Louis du Preez, Professor of Zoology at North-West University in South Africa and a parasitologist, and John H. Malone, Ph.D, Assistant Professor of Molecular and Cellular Biology at the University of Connecticut, were catching turtles at Barrett Pond last week to try to track down the subject of du Preez’s research, a flatworm parasite that is found on turtles and other amphibians.

It’s a story that begins 77 years ago in Barrett Pond during a study of turtles and 250 million years ago when parasites began coevolving with amphibians. That’s how far back the parasites’ lineage extends, as du Preez said, they outlived dinosaurs.

In 1938, a researcher caught turtles in Barrett Pond and established a record of one of the parasites that du Preez is studying. He and Malone have worked together at his lab in South Africa and Malone did the initial logistical work that got them to Barrett Pond. Eric Lind, Director of Constitution Marsh Audubon Center and Sanctuary, assisted by facilitating access for them and opening up the lab at the Marsh to them.

After catching turtles at the pond, which is at the end of Fishkill Road near Route 9, Malone and du Preez spent the week studying them and recording their vital statistics, most importantly their parasites, called polystomatids, which live harmlessly in their mouths, eyes and bladders. 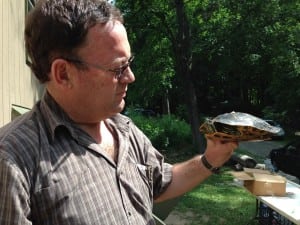 The parasites don’t harm the turtles. In fact, they have coevolved together and studying the parasites reveals more about the species. du Preez said, “The parasite is part of the beauty of nature. For close to 250 million years they are infecting and radiating with these early amphibians and turtles and so on. The real goal is to unravel the evolutionary radiation of the turtles and the parasites. It’s a beautiful success story. The sheer number of parasitic species outnumbers all other species.”

They found three painted turtles that were infected with the parasite, making it a successful excursion. In France, where du Preez has been studying the taxonomy of native turtles and their parasites, he discovered that there are distinct genetic species of parasites. He has identified 8 genetic parasite species in France and he’s trying to determine which are native and which are introduced.

Following the trail of the red-eared slider was the next step and tracking down the parasites that had been recorded in the 1938 study has provided valuable answers.

The international pet trade is behind the mystery of how the parasites of American turtles appear in ponds in France. The red-eared slider, a popular turtle for pet stores, is the most likely host. du Preez has found the native Florida turtle in France and they caught one in Barrett Pond last week. He said, “For some reason, it serves as a taxi for other parasites. 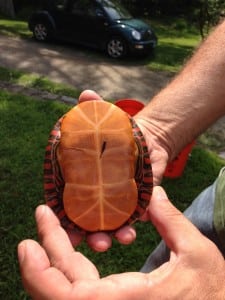 The underside of a painted turtle.

Up to 80,000 red-eared sliders were exported per month from the USA to Europe and Asia at one time for the pet and food trade. Then a ban was put in place on its export, but it’s still happening.” The turtle gets too big or the novelty wears off and the owner releases it into the wild. Since it survives well in many habitats, it starts breeding and settles in.

du Preez sees the picture that most of us miss. He said, “They aren’t just exporting that turtle, they’re exporting that parasite. When you have a parasite jumping onto a new host it often has traumatic effects and could kill that host.” Non-native turtles outcompete native turtles for basking areas, food and the delicate balance of an eco-system is unsettled.

Malone and du Preez caught 34 turtles in Barrett Pond, mostly painted turtles, some snapping turtles, and one red-eared slider. One turtle they caught appeared to be a hybrid with markings similar to both red-eared sliders and painted turtles. Mixing genes weakens the overall health of the turtle community. The solution is not to move animals around. Even taking a tadpole from your friend’s pond and later releasing a frog in a different area is discouraged.

He has been tracking the parasites from the Amazon to Africa to Madagascar to Malaysia, Australia, France and now Cold Spring, NY. Their next stop was in Raleigh, North Carolina. The turtles were released back into the pond unharmed with their parasites intact at the end of the week. Hopefully in another 80 years, the pond and the turtles and their parasites still exist and we can look forward to a follow-up study.