On Tuesday, Aug. 4, the patio at Beacon’s Bank Square Coffeehouse was packed while David Bernz, owner of Main Street Music, hosted yet another open mic event. The night was a success, as various locals were given the chance to showcase their talent in a public setting.

Ray Lutz, announced by Bernz to be “the mayor of every open mic he’s been to,” delivered some relaxed acoustic tunes for all to enjoy. Then came Fred Zeppelin on the ukulele. He provided a refreshing rendition of Pink Floyd’s “Another Brick in the Wall” as well as covered Radio Head’s “Creep,” both of which worked surprisingly well as ukulele covers. A male and female act by the name of Dead End Beverly wrapped things up nicely, including hits such as “Killing Me Softly” and Tracy Chapman’s “Give Me One Reason.”

Every other Tuesday, performers can be found singing and strumming away at an open mic event on the patio of Bank Square. Especially if the weather is nice, a sizeable crowd of attendees can be found sitting and listening, tapping along to the music or hanging out with friends enjoying the pleasant atmosphere. Manager Jeff Raffensperger said of the open mics, “We really do them for the community and because it’s a lot of fun; if they attract new customers then, hey, that’s cool too.” 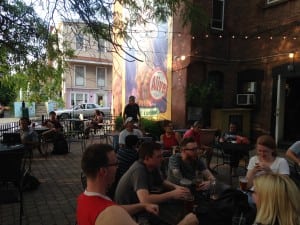 The demographic that finds itself in Bank Square’s cozy seats on the average night tends toward the “young adult” label, but not exclusively a crowd in its mid 20s or 30s that may have dominated the café a year or two ago.

Recently there has been an influx of teenaged customers who come for the delicious coffee and stay for the environment. The business offers something unique that is difficult to come by elsewhere in Beacon or Philipstown. Maybe the funky furniture has something to do with it — or maybe it is the fact that no one seems to be in a rush to leave once they are there. The coffee shop has become a cultural and creative hub of sorts, thanks to a few different qualities.

The tradition of hosting an open mic brings people together; whether it be to listen to music or perform, everyone is welcome. Bank Square also makes a good effort to schedule musical performances regularly, so there’s always something to look forward to. “There is a pretty vibrant nightlife here throughout the week, not just on weekends,” mentioned Raffensperger. In combination with the welcoming atmosphere, the business has turned the errand of getting coffee into an enjoyable outing.

Beacon resident Sisi Lombardi, 18, commented: “I’m a regular at Bank Square because of the positive atmosphere. The employees are welcoming and friendly, and it’s my at-home getaway.”

While Bank Square solidifies its rank as a teenage hangout that is built to last, the age-old question is begged, “Where in Cold Spring can teenagers go to hang out?” The recently opened Groombridge Games store on Main Street offers a space for Philipstown’s younger people to gather and play strategy games — a positive step toward providing teens with a social experience away from home. Perhaps in the future even more local business will fill the void of teenage boredom.