If asked by a visitor to recommend an interesting art gallery, most local residents would probably list venues such as Gallery 66 NY or Buster Levi in Cold Spring, along with Dia, Riverwinds and other Beacon locales. They would not be wrong. But few, if any, would give a nod to the Julia L. Butterfield Library. Granted, its collection is small, featuring only nine paintings in all. But the collection offers a fascinating portal into important aspects of Cold Spring’s past and its connections to the larger world. And the names associated with the paintings resonate with present-day Cold Spring.

“The majority of the collection was left to the library in Julia Butterfield’s will,” explained Library Director Gillian Thorpe. Butterfield died in 1913. Donations made as part of her will also led to establishment of the library itself, as well as Butterfield Hospital.

Three of the library’s paintings are by Thomas Rossiter; two of them are currently on loan to Boscobel through October. A Picnic on the Hudson, painted in 1863, is by far the most valued piece in the library collection. In his appraisal, Bruce Gimelson of Garrison commented that Rossiter was an intimate of Hudson River School painters John Frederick Kensett and John William Casilear. He valued A Picnic on the Hudson at $1 million. 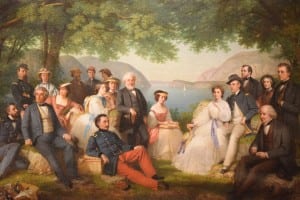 A Picnic on the Hudson by Thomas Rossiter, currently part of a Rossiter exhibit at Boscobel, is valued at $1 million.
Photo by M. Turton

“Rossiter’s paintings are not generally valued that highly,” Thorpe said. The increased value is due to the people shown enjoying their picnic on the banks of the Hudson River, Thorpe said. The painting is a veritable who’s who of 19th-century Cold Spring. It features such luminaries as Gouverneur Kemble and his brother William Kemble, co-founders of the West Point Foundry; artist Thomas Rossiter; U.S. Military Academy professor and painter Robert W. Weir; poet George Pope Morris; Robert Parrott, inventor of the Parrott rifled cannon; Gen. Gouverneur Kemble Warren, famed as “Hero of the Little Big Top” for his role at the Battle of Gettysburg; and Mr. and Mrs. Frederick P. James, née Julia L. Safford (before her then-husband passed away in 1884; she married Daniel Butterfield in 1886).

Rossiter’s other painting currently on loan to Boscobel is A View of the Hudson River From the Artist’s Home in Cold Spring, which features the landscape and river as seen from just east of the village. His 1861 portrait of Julia L. James (Butterfield) is also part of the library collection. 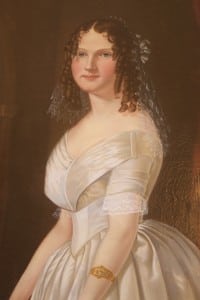 With other paintings appraised in the $15,000 to $25,00 range, the complete collection is of considerable value. “And to be honest, it’s a huge risk; I worry about them,” Thorpe said of the paintings. “They have to be insured. They haven’t been cleaned since the 1980s, and they need some stretching and work on the frames.” Last month, shades and ultraviolet material were put on the library’s windows to protect the paintings from harmful light. The library is secured by an alarm system, and the more valuable paintings are also protected by individual alarms.

The collection is definitely an asset, particularly for a library that has struggled financially at times. “The board has discussed possibly selling the collection in the past, but I don’t think they would,” Thorpe said, adding that the library is trying to honor Butterfield’s will as much as possible. “The collection is something Julia Butterfield wanted to share with the community. It’s a big part of history. I kind of see us as being the Julia and Daniel Butterfield museum.”

Other artifacts left to the library by Butterfield, beyond her painting collection, underline that museum role. “She donated other items to the library, the hospital and St. Mary’s Church,” Thorpe said. The library’s inactive fireplace now holds a log with a cannon ball embedded in it, a remnant of the Battle of Chattanooga. Daniel Butterfield served as a brigadier general during the Civil War and was a recipient of the Medal of Honor.

The library also houses Julia Butterfield’s papers, which include personal letters, financial records and her husband’s accounts of the Civil War, most notably a map of plans for the Battle of Gettysburg. According to Thorpe, the Civil War papers are of particular interest because Daniel Butterfield’s correspondence paints a different picture of certain aspects of the war, contradicting other historical documents. Thorpe said she hopes to find a grant that will enable the library to digitize the Butterfield papers. 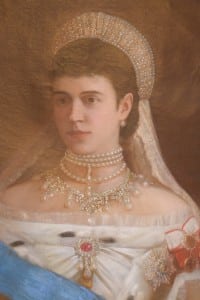 Perhaps the most intriguing piece in the art collection is an 1890 portrait of Empress Maria, wife of Emperor Alexander III of Russia. She was also the mother of Nicholas II, the last of the Russian czars. The artist was Ivan Konstantinovich Aivazovsky, considered one of the greatest marine artists in history. Julia and Daniel Butterfield purchased the portrait from Aivazovsky, with the consent of the empress, during their travels through Russia after being married in London in 1886. “Mrs. Butterfield and the empress were friends,” Thorpe said. 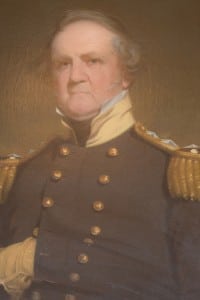 Another portrait of note is a depiction of Winfield Scott, who, in addition to serving as a general in the Army, made an unsuccessful bid for the U.S. presidency as a member of the Whig party in 1852. Scott served as a general in active duty longer than any other American. His 53 years of service lasted from the War of 1812 to the Civil War. Known as the “Grand Old Man of the Army,” Scott is considered one of the country’s greatest generals and is credited with contributing to the military strategy that ultimately led to the defeat of the Confederacy. His portrait was painted at West Point by Weir, a professor at the U.S. Military Academy (and part of the group portrayed in Rossiter’s A Picnic on the Hudson River).

Thorpe recalls receiving a call from a man in Texas who was planning a trip to Cold Spring specifically to see the panting of Scott, one of few in existence. “He wanted to ensure that the painting was still on display here” before making the trip from the South, she said.

Taking care of Butterfield’s will 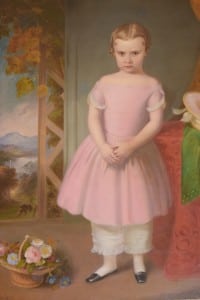 This portrait of a young and not-so-happy Maria Haldane, born in Cold Spring around 1840, was painted near the site of present-day Tots Park by an unknown artist. Photo by M. Turton

Another piece that speaks both of Cold Spring’s past and present is a portrait of a young girl, by an unknown artist, on the veranda of a house in the area of what is now Tots Park. The Hudson River and Hudson Highlands can be seen in the background. The girl, who does not appear to be particularly happy about having her portrait done, is Maria Haldane, born in Cold Spring around 1840. Haldane School now bears her family name.

One mystery in the collection is a portrait of an unnamed young boy, artist unknown. Other paintings include two portraits of Julia Butterfield, one a pastel that for years was housed in Butterfield Hospital and the other a large portrait that depicts a 16-year-old Julia just before she married Frederick James.

Thorpe said that a brochure is being developed to interpret the art collection to visitors. No thought is being given to expanding the art collection. “It’s not really part of our mission.” She said. “We were willed the Butterfield collection — and we need to take care of it.”