When I first started kayaking on the Hudson River, I never suspected that the dense plant cover was problematic. I didn’t know much about invasive plants then and assumed it was all supposed to be there. Now that I understand more about invasive species, I know that all that foliage spread out on the water’s surface is really a huge problem for the ecosystem of the river and actually an exotic plant that has displaced natives.

Look out the windows of Metro-North as you travel along the Hudson and you’ll see it in the marshes and in the river. Water chestnut, or Trapa natans, appears in the river only about as far south as the Philipstown area. It prefers freshwater, and the river becomes more and more brackish south of here.

When I spoke to Dr. David Strayer, freshwater ecologist at the Cary Institute for Environmental Studies, I learned that water chestnut has spread everywhere that it’s probably going to spread at this point. That means controlling it or eradicating it isn’t even really on the table as a plan; that’s how difficult it would be. At this point, the main goal is to contain it from spreading to other waterways from the Hudson. Lakes, ponds, marshes, rivers, wherever there is a freshwater source, water chestnut can invade. Water chestnut can be found in the river from the Philipstown area all the way north to Troy. 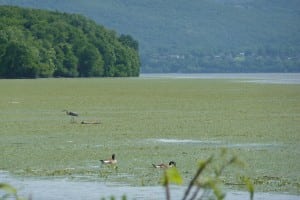 Water chestnut covers the bay in front of Denning’s Point State Park along the Beacon waterfront. (Photo by P. Doan)

Eric Lind, director of Constitution Marsh Audubon Center and Sanctuary, looks out at the marsh every day and wishes the water chestnut wasn’t there, but he doesn’t have a hope of managing it in the marsh, although his team has been able to manage other invasive plants, like phragmites. Water chestnut is so effective at dispersing its seeds that the annual plant may be here to stay until some other invasive plant or insect or other scenario we can’t anticipate presents itself to take its place.

Water chestnut’s history and arrival charts a similar course as that of other invasive species. The original invading species, humans, thought it would be a good idea to plant it without understanding the consequences. It arrived in the U.S. from Europe or Asia sometime in the 1870s in the Northeast and quickly escaped cultivation. The plants in the Hudson River have probably been here since the 1880s. Lind said: “It got in through the Mohonk watershed. It’s a prolific plant, and once it gets to such a large extent of expansion, there’s very little that can be done about it.”

In its native habitat, water chestnut, which is not at all related to the Asian tuber found in the grocery store, is kept in check by native insect parasites. The spiny, sharp, dark seeds wash up onshore. They’re all over the riverfront in Long Dock Park and Denning’s Point at this time of year. They also effectively stick to bird feathers and boats and are carried in currents through waterways.

Given a freshwater source and shallow growing conditions, water chestnut can settle in quickly. It can grow in water up to 16 feet deep. The rosette leaves form a mat so dense that, according to Strayer, “it’s dark as night underneath. Light doesn’t penetrate.”

By blocking light from the water, the plant prevents photosynthesis for other plants. Water celery, or Vallisneria americana, is the native plant that has been displaced by water chestnut. It can’t compete, and it can’t grow alongside or under water chestnut.

Plants in the river perform many functions. Described technically for study as “submerged aquatic vegetation habitats” by scientists and researchers because the plants root under water and have leaves on the water’s surface, these areas are nurseries for young fish and are home to many invertebrates, and they support the overall ecosystem of a healthy waterway. One of the most important features of plants in the river is to provide oxygen, which everything needs for survival.

Water chestnut, however, takes oxygen out of the water. Strayer said: “It releases oxygen into air, not water. Tides push oxygenated water into a bed, and when water comes out it has little or no oxygen in it. We don’t fully understand it.” While fish couldn’t survive without oxygen, some have been found in water chestnut beds, although Strayer said it was difficult to survey or sample in water chestnut beds due to the density. He compared it to walking through a thick blackberry patch.

Next week, read about water chestnut’s impact on river life in “Roots and Shoots.”