There are matches made in heaven: you know, couplings where both partners seem to have been made for each other and the whole is greater than the sum of its parts.

I’m not talking Kim-ye, Jay Z/Beyoncé or Justin and Jennifer, more the culinary couplings that we know and love — peanut butter and jelly, tomatoes and basil, lemon and capers, bagels and lox, bacon and, well, anything!

There are plenty, and we all have favorites, most the result of deeply ingrained cultural and familial traditions, preferences and habits.

We’ve probably even picked up another one or two along the way — favorite, shall we say, tribal variations, kluged together from the self-selecting social relationships that define or at least influence our tastes (used here in its broadest sense).

The modern cult of food (tribally, foodies) has spawned many specious factions, and each of these has in turn identified its own complement of markers, memes and acceptable pairings. But among these far-reaching movements, none has done more than the clan of Molecular Gastronomists (or Gastronauts), and more recently, an extreme caste — the Gastrophysicists — to expand boundaries of taste and food combinations. 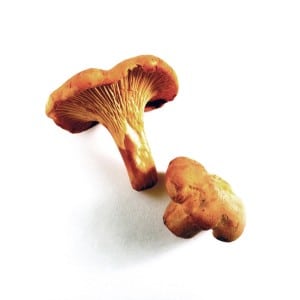 Employing modern science and technology to an extent far more zealous and arcane than Harold McGee, Wylie Dufresne or Grant Achatz ever imagined — we’re talking analytical chemistry, high-pressure, liquid and gas chromatography — they seek to identify chemical, odor and flavor components, establishing a science of food pairing (not yet trademarked and completely branded, but it can’t be far away) based on a theory that foods taste good when they share similar flavor profiles.

While this broad experiment has suggested previously unimagined combinations — peas and strawberries, chocolate and cauliflower, caviar and white chocolate or avocados and coffee — more interestingly it has validated many of the global “Greatest Hits” combinations: cinnamon and sugar, chocolate and orange, among others, and including the entire list mentioned above — starting with peanut butter and jelly. (OK, maybe bacon-and-everything was a bit of an exaggeration, but I stand by it.)

Time and fashion may validate some of the more outré combos as other than culinary parlor tricks, but the scientific affirmation of some classic “partnerships” suggests that many of our instinctive methods for making these connections are just as legitimate. In the lexicon of science, what we’re looking for is a symbiosis, an organic (as in natural or unforced) relationship, or more specifically a mutualism in which the combination is win-win for everyone — a culinary holism.

One such connection touted by food-pairing gastrophysicists is chanterelles and apricots, which may to the uninitiated sound a little strange, but is obvious to the experienced mycophile in that a basketful of fresh girolles (French for chanterelles) is unarguably redolent of the summer fruit. And no less an authority than British food writer Jane Grigson comments on the pairing and promotes it in many recipes (in her 1975 classic The Mushroom Feast). Maybe it’s a British thing, this combining the sweet and savory, but it has become a recurring practice in my own kitchen bag o’ tricks.

But this idea of seasonal partnerships brought me to one I hadn’t encountered in readings (nor have any scientific “proof” of), and that’s the union of chanterelles and sweet summer corn.

I stumbled upon the fusion one summer after scoring a major haul of mushrooms; it occurred to me that the sweetness of the corn, which was also in plentiful abundance, and its bright, sunny color were somehow analogous to the apricot-chanterelle combo and worth exploring. 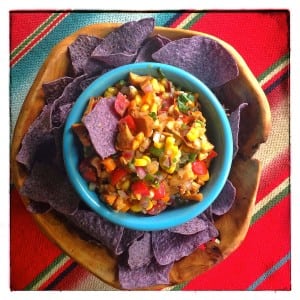 This led down some interesting pathways: corn-chanterelle bisque; a baked casserole of creamed corn and chanterelles (topped with frizzled shallots); cornbread-chanterelle-sausage stuffing (apricots included) for a Thanksgiving turkey.

In today’s offering, charred off-the-cob kernels are married to quickly sautéed mushrooms and straightforward salsa ingredients and seasonings. I’ve enjoyed this recipe on quesadillas, a great stand-alone salsa for chips, as an accompaniment to chicken tacos and over sautéed spinach as a bed for pan-seared scallops, all admittedly instinctual.

But returning to science for a moment, I’m also reminded of a “recipe” proposed by Michael Bom Frøst, professor of food science in the Nordic Food Lab, University of Copenhagen (apparently a hotbed of gastrophysics). His scholarly proposal posits that “a meal is a context” above all else, interaction between the food, its presentation and setting. Here is his paraphrased “recipe” for the ultimate dining experience, which is after all what we’re chasing:

The Best Meal Ever

1 good presentation (appropriate to the situation)

Trim presentation to size — not too long; emphasize process. Bring to a simmer.

Add remaining ingredients, beginning with familiarity and surprise; slowly add complexity to taste, and finish off with novelty (the freshest available!). Continue simmering until serving time.

To serve: Request that guests bring curiosity and hunger.

Note: Previous experience with high-end gastronomy not necessary, but it contributes marginally to the enjoyment.

You can’t argue with that kind of science.

½ pound (up to 1 pound) chanterelles, cleaned (do not moisten), sliced/chopped roughly

Heat 2 to 3 tablespoons olive oil in a large (cast iron or decent nonstick) skillet; add shallots and cook, stirring, until translucent, about 3 minutes. Add mushrooms and apricots, stirring until mushrooms are cooked through, 5 to 8 minutes. Remove from heat and reserve in a large mixing bowl; wash and dry skillet.

Return dry skillet to stovetop and heat until almost smoking. Add corn kernels, stirring frequently to dry-roast them for 5 to 6 minutes (until they begin to brown slightly). Stir in maple syrup briefly to incorporate and, stirring, caramelize for a minute or more. Remove from heat and add to mushrooms and apricots.

Serve as an appetizer with corn chips or as an accompaniment to grilled or seared chicken, scallops or pork.