Manitoga’s External Affairs Manager Dan Rigney explained: “The Artist Residency Program is new work — when we invite artists to participate in the program, we want them to be inspired by the site … it doesn’t necessarily have to be about the site but should come out of their experience of the site.”

Rigney and Neill, who was himself responsible for last year’s groundbreaking Manitoga, a composition for brass quintet and electronics performed from the woods and plateaus surrounding the pool, were in accord about what they wanted to accomplish for this annual performance.

Rigney said: “We have a very unique instrument here — the quarry isn’t just a venue, it’s something that can actually be ‘played.’ … People who were here for Manitoga had an extraordinary experience.” He added, “I think we’re going to see — hear — something very unique here again.”

In that spirit, the proceedings open with an “appetizer” — a short performance of John Cage’s Five (1988), one of his so-called “Number Pieces,” terse musical fragments of frequently just one note (with or without dynamics), and indications (in minutes and seconds) of when the fragment should start and end, the sparseness of which will surely echo Neill’s Manitoga.

But bookending the performance, and central to the program’s overall aesthetic, is the closing presentation of Terry Riley’s In C (1964).

Universally considered a seminal work — perhaps the spiritual ground zero — of the musical school known as minimalism, both Rigney and Neill jointly perceive and selected the piece as a “designed work” — individual performances mixing to ultimately produce an organic “whole,” itself a living response to Manitoga (the place), the floating-woven Sanctuary installation, this specific musical ensemble and ultimately Russell Wright’s democratic design process and legacy.

The “score” for In C consists of 53 musical “modules” and a page of process instructions for its unspecified instrumentation. Individual performers each have the freedom to play the piece as they see fit — beginning each motif when and repeating each phrase as many times as they desire — so long as all the motifs are played through in order to the end.

A single instrumentalist or percussionist plays an eighth-note pulse to rhythmically bind the piece. (For the original San Francisco performance, a 28-year-old Steve Reich suggested this pulse as an organizing principle and played it as a high C on electric piano.) 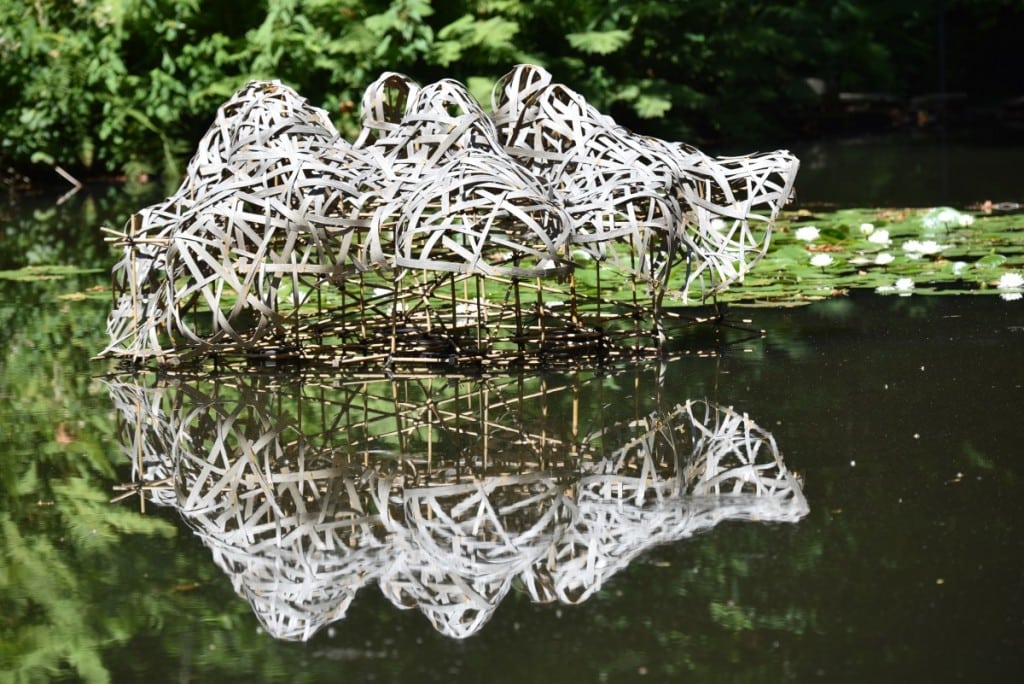 The modules are all tailored within the notes of the C-major scale (with a smattering of F-sharps and B-flats), and this harmonic consonance was seen as a radical reaction to the atonality and dissonance of 12-tone serialism prevalent in the academy at the time.

A music critic for the San Francisco Chronicle described the 1964 premiere in words that remain cogent: “Climaxes of great sonority and high complexity appear and are dissolved in the endlessness. At times you feel you have never done anything all your life but listen to this music and as if that is all there is or ever will be.”

The random way in which the musical motifs weave in and out echoes Riley’s experiments with tape loops and phase shifting, celebrating the chance events and movements within the larger piece. This attitude of “open instrumentation” and “open composition” assures a work both different and authentic every time it is performed.

If In C, and its crossbreeding of technology, Western and world music, process thinking and the experimentation that shaped it, was a harbinger of the infinite strands of music and culture that confront and entertain us today, the work of featured performer, composer-violinist-technologist Reynolds firmly anchors these strands and the center of this program with the premiere performance of his solo piece, Casual Lines. 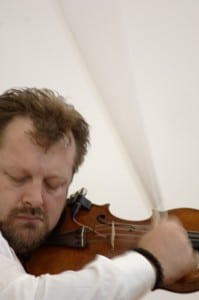 Asked about his compositional aesthetic, he said: “Although I come out of the classical tradition — the larger-scale forms — my language tends to be more rhythmic and less harmony-driven than jazz. But, it has influences from everything but the kitchen sink … it’s an improvisatory, live response to the space in real time.

“I look to composers who are really looking forward rather than backward, who are writing music for ears that are listening now,” he said, citing Pascal Le Boeuf, Andy Akiho, “and of course all my Bang on a Can counterparts — Michael Gordon, David Lang, Julia Wolfe” as references. (Reynolds’ recurring musical alliances include Bang on a Can, Reich’s ensemble and Meredith Monk; he is also a founder of the string quartet Ethel.)

Reynolds is a self-identified proponent of a movement he labels “present music” — a hybrid-musician outcrossing of old and new technology, multidisciplinary aesthetics and cross-genre composition/ improvisation.

“‘Present music’ actually comes out of a defiance for all these labels for contemporary music … they all mean something different to different people. ‘Present music’ is just my own, very personal commitment to saying that the music that I play and the music that I choose to make with other people is really occurring in the moment,” synthesizing everything from classical music to jazz, rock and EDM. He posited, “The concert hall and clubland are undeniably intertwined territories.”

A territory that now also solidly includes Manitoga and the Hudson Highlands.

Doors open 3:30 p.m.; the program begins at 4. Seating is on a first-come, first-served basis. Wear suitable shoes for uneven terrain. The rain date is Sunday, Sept. 27. For details and tickets, go to visitmanitoga.org.