Records second win of the season

The Haldane girls’ varsity tennis team earned their second win of the season, against one loss, on Sept. 18 against a tough Beacon High School team. Olivia Sterling of Haldane, playing No. 1 singles, defeated Olivia Banks in straight sets, 6-0, 6-1, while at No. 2 Haldane’s Carly Brief topped Rachael Ng, 6-4, 6-1.

Lucinda Strol of the Blue Devils took on Emma Henderson next in what turned out to be a grueling, three-set match. Strol won the first set 6-1, then lost the second in a seven-point tiebreaker, 9-11. The third set played as a 10-point tiebreaker and was filled with long and hard fought points by both players before Henderson won, 10-8. 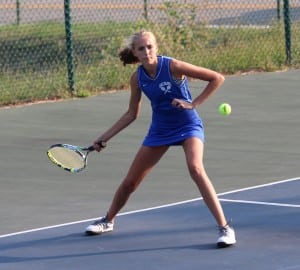 Alii Sharpley of Haldane during a doubles match on Sept. 18 (photo by Michael Haines)

The first doubles team of Alii Sharpley and Olivia Olsen of Haldane took on Meera Patel and Emily Bautista of Beacon for three sets. The Beacon duo took the first set 6-1, but Sharpley and Olsen fought back to win the second, 6-3. The tense third required another 10-point tiebreaker; this time Haldane prevailed, 11-9, to secure the team win.

Mollie Altucher and Ashley Haines of Haldane finished the night in an eight-game pro-set against Beacon’s Melina Cicigline and Megan Dowd. The Haldane team played well considering it was only Haines’ first match, and Altucher’s third, but Beacon prevailed, 8-3.