Artists will open doors to public on Sept. 26 to 28

More than 60 artists will pull back the curtains this weekend in Newburgh as part of the city’s fifth Open Studios event, offering a glimpse into their creative spaces. 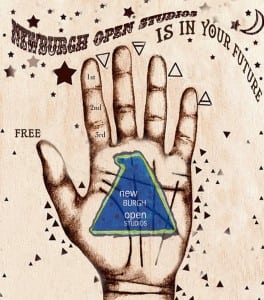 Free shuttles will run from Friday evening, Sept. 26, to Sunday afternoon, Sept. 28, from the Beacon train station to Newburgh Art Supply at 5 Grand St., where maps will be available to direct visitors to participating studios. Studios will be open from 11 a.m. to 5 p.m. on both days. The event kicks off Friday from 6 to 9 p.m. with the opening of Ruedi Hofmann’s Pivotal, Faces of Change: Newburgh at the Thornwillow Institute, 7 South Lander St.

Emanating from the historic waterfront district, the creative environments visitors will encounter are many and varied. Some artists work from home, others are in traditional gallery settings and still others utilize “messy, alternative” spaces, explained Gerardo Castro, who has organized the event since the first in 2011 with his co-owner at Newburgh Art Supply, Michael Gabor.

“It’s extremely rare to have an artist invite you into their space,” Castro said. “It’s more of an intimate encounter because you get a look into how they work as opposed to experiencing them in a gallery.”

Open Studios is designed to show off the vibrant artistic community in Newburgh, he said. “People have a misconception” about the city, he said. “There are things happening here that are not being reported on, and at its core is an art community doing amazing projects.”

At the Thornwillow Institute, Hofmann’s Pivotal exhibit will feature still photographs—many of them life-sized—as well as video interview clips and a 20-minute film highlighting 53 individuals who are helping to revitalize Newburgh.

“When you say ‘Newburgh’ what follows is something that’s generally a negative,” ” Hofmann said. “So how do you change that consciousness within people? By creating something that has a ‘positive’ in it, it just may help.”

Hofmann has photographed artists participating in Open Studios since 2012. Earlier this year, he took on a new and particularly meaningful project—photographing people he saw bringing positive change to Newburgh. He formed a list of some 120 potential subjects, then whittled it down to the 53 people included in the exhibit.

“This shows people that there is a community here,” said Gabor. “People are moving here and they’re settling here, and they think this is a great place to live.”

For more information and a shuttle schedule, visit newburghopenstudios.org.