Denise Summerford will star beginning Oct. 9 in a one-woman show for Half Moon Theatre portraying the madcap adventures of a single New Yorker looking for love while cooking a three-course dinner (including homemade pasta) on stage.  Based on Giulia Melucci’s memoir as adapted by Jacques Lamarre, I Loved, I Lost, I Made Spaghetti, celebrates Italian home cooking as an expression of love and a source of comfort when the romance goes cold. 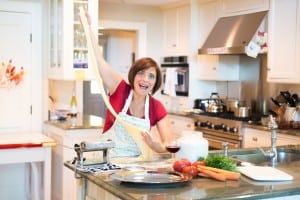 A limited number of onstage seats are available at $75 to $90 to enjoy Summerford’s meal during the show, which runs through Oct. 25 at the Marriott Pavilion Theatre at The Culinary Institute of America.

Half Moon Theatre’s season will continue with a variety of offerings, from Patrick Barlow’s A Christmas Carol to the comedy Vanya and Sonia and Masha and Spike. Half Moon and the CIA will also partner to offer original programming that combines the gastronomic and theatrical arts, including a Cabaret series called “Downstairs at the Marriott” and a twist on HMT’s annual Ten-Minute Play Festival where patrons will sample an array of dishes featured in each of the plays after the production.

Tickets are available by calling 800-838-3006. Pre-theatre dining reservations at each of the CIA restaurants will be available two months prior to each production by calling 845-905-4533 or emailing [email protected]