Native plants are an alternative

I can’t believe how many invasive plants I have inadvertently purchased and brought home over the years. Before I knew much about the value of native plants, I tried to talk with gardeners and staff at greenhouses but what I’ve realized is (1) you have to ask the right question (e.g., “Do you have a native plant that likes these conditions?”) because otherwise you’ll be steered toward whatever is popular, and (2) many home gardeners don’t understand the importance of native plants and landscaping that contributes to an ecosystem — like me, five years ago.

Today was the last straw for a spirea I bought many summers past at an end-of-season plant sale. It’s a Japanese variety Spirea japonica and, while it isn’t on the New York State Department of Conservation’s list of prohibited plants, it is in the U.S. Department of Agriculture invasive plants database. It’s too bad: I had finally decided where to put it after it spent years in a container on the patio.

It turns out that Spirea japonica can get aggressive, crowding out other plants. I’ve noticed its pink flowers on the roadside and in the woods. It thrives anywhere there is disturbance in the soil. Its seeds are hardy and it can quickly create a dense stand.

So I’ll instead be planting a native variety called Spirea alba, known as meadowsweet. I bought 10 seedlings at the Putnam County Soil and Water District spring sale many years ago and can finally move a few out of the container on the patio. (Yes, like many gardeners, I have a habit of collecting plants that I’m not sure what to do with.)

Spirea alba has prolific clusters of small, white flowers that bees and butterflies are attracted to. It prefers wet conditions, ideal for a pond or stream bank or a rain garden. 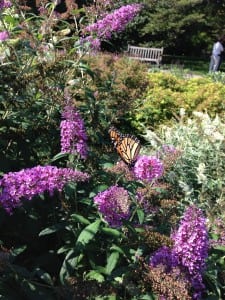 A monarch at the New York Botanical Garden (photo by P. Doan)

My other major mistake that I had to correct this summer was the cup-plant I bought at a non-profit plant sale five years ago. Silphium perfolatium did make the DEC’s prohibited plant list and although mine wasn’t violating any regulations, I couldn’t let it become a problem, which is too bad. I loved that plant. Tall and strong, it had thick stalks with dozens of bright yellow flowers. It was the centerpiece of one of my flowerbeds and it also attracted bees and butterflies.

After I dug it out this spring as it was sprouting, I had to spend the rest of the summer continuing to dig it out and I bet I’ll be digging it out for a few more years. It doesn’t have a bad reputation for no reason.

I’m redesigning the whole bed and started from the center where it left a substantial hole. I filled in with a few Liatris. It’s a popular cutting-flower, too, and maybe more well-known in florist shops. Liatris varieties include 40 different plants, at least. It’s also known as blazing star and prairie feather.

A few of the Liatris were too tasty for the fat woodchuck who has been living in the yard to pass up, but I’m hopeful next summer to have more blooms. Bees and butterflies could be found enjoying the one that bloomed, however, so that was a success.

I also added two varieties of native milkweed. The woodchuck helped himself to those, too, and I have a better understanding why they don’t make it in the woods anymore. I didn’t see any monarchs in my yard, sadly. During a recent visit to the New York Botanical Garden, I saw that a section in their home garden feature had at least a dozen monarchs covering buddleia bushes. They’re so beautiful, it’s hard to believe the threats they are surviving.

Native plants probably existed in your yard before it was developed. The birds and pollinators, all of the insects and wildlife, relied on them, as did other vegetation. Even when we disrupt the land by building on it and paving it, we can still create oases. Ask a few more questions at the landscape center before bringing home a plant and it’s possible to have a positive effect.