Insurgent candidate Bob Tendy accumulated more votes than favored son Adam Levy in the Sept. 10 Republican primary for Putnam County district attorney. But Tendy appears to lag well behind when it comes to amassing and spending money in their ongoing contest to win the general election Nov. 3. 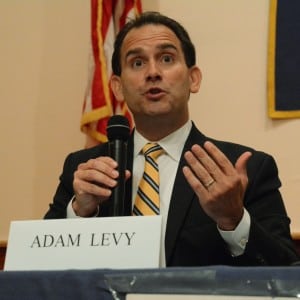 And as their messy feud continues, it exposes a deep rift within Putnam County’s Republican Party, which should have been assured an easy time of it, since no Democrat is running for DA. Instead, Levy, the incumbent district attorney, who beat Tendy in a vote at a party nominating convention last May, campaigns with the endorsements of the Conservative, Independence, and Reform parties as well as the support of leading members of the Republican establishment, but Tendy, currently the Putnam Valley supervisor, is the official Republican candidate.

Data from campaign finance records compiled by the New York State of Elections reveal that by the time they filed their 10-day post-primary reports (which were due Sept. 21), Tendy had spent $51,411.39 and received $56,325 in donations, including $26,650 from one Robert Tendy, plus a scattering of men and women surnamed Tendy, and numerous others.

Tendy’s filings revealed no contributions from or payments to anyone in Philipstown.

Levy’s reports showed regular transactions at the M&T Bank in Cold Spring; $5,300.80 in payments for print materials to the Putnam County News and Recorder or its sister Putnam Courier, made via the PCNR’s Cold Spring postal address; $502.86 spent at Grey Printing, Cold Spring; and $24,500 in monthly payments from March into September, of $3,500 each to MKT Works Inc., or Marketing Works, based in Nelsonville, whose president, Marshall Mermell, endorsed Levy’s candidacy on Facebook.

Along with accumulating contributions and costs, both Levy and Tendy have collected endorsements from police-related organizations. Tendy’s include a letter from the Law Enforcement Employees Benevolent Association, which represents New York City Department of Environmental Protection police, who patrol the city’s water reservoirs and watersheds in Putnam County. “Your experience and knowledge make you an excellent choice for this respected position” of district attorney, the association’s Kenneth Wynder wrote in an undated letter to Tendy. 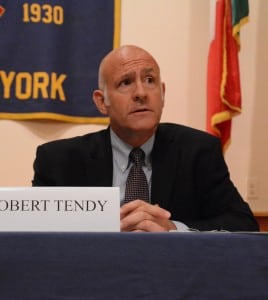 Similarly, the Sergeants Benevolent Association, representing some 12,000 active and retired New York City Police Department sergeants, endorsed Tendy. The sergeants “believe very strongly that the job of ensuring the safety of our fellow citizens is perhaps the most sacred responsibility in our society” and feel “that you exemplified that responsibility” while serving as New York assistant district attorney in the past, the group’s president, Ed Mullins, told the candidate in a Sept. 14 letter. “Additionally, your knowledge of local issues and your commitment to the law enforcement community is commendable.”

In turn, Levy won the backing of the N.Y. State Troopers Police Benevolent Association. “During his tenure as the Putnam County district attorney, Adam Levy has been a strong supporter of troopers and law enforcement officers” and “has proven himself a tough prosecutor who makes special efforts to support and seek justice for crime victims,” the troopers’ organization said.

Moreover, Levy this week gained the endorsement of the New York Court Officers Association, although a request to his campaign for a copy of the endorsement went unanswered.

Neither Levy nor Tendy has campaigned actively in Philipstown, nor did either campaign respond to a request for comments on how each candidate assesses his chances as the campaigns enter the final month.

The two have persistently hurled invective, each claiming to stand for integrity while blasting the other for “fraud.”

Before the primary, Levy filed a legal challenge to Tendy’s candidacy, alleging fraudulent behavior and forgery by Tendy or his supporters regarding signatures on his mandatory candidacy petition.

Tendy later accused Levy of harassing voters who signed the petition and employing a “phony scare tactic,’” adding that “in the end, both Supreme and Appellate Courts found no evidence whatsoever of fraud or forgery. So the only fraud that took place here was the fraudulent case by Levy and his attorneys. They cost the taxpayer a lot of money.”

Six days before the primary, a paid Levy campaign consultant, Guy Parisi, a Rye lawyer, submitted a formal complaint to the state Board of Elections, arguing that in the state’s campaign finance database he could not find any listing of an official Tendy district attorney election committee or the campaign finance reports candidates must file 32 and 11 days before a primary election. Whatever the reality when Parisi checked, recent searches of the state’s database produced that information.