Coach Tom Locascio said he had wanted his teams to compete in the classic, “one of the best small school races in the state,” for a number of years, but that it is a long trip to central New York. This year, he said the strength of both teams justified the 5:30 a.m. departure. 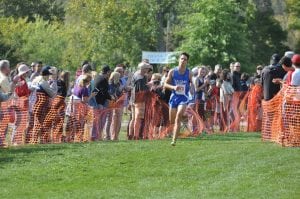 With the boys running at 10:10 a.m., there was little margin for error on the roads, or on the track. “With so many good teams present, we couldn’t afford a poor performance from anyone,” he said.

The boys came through, finishing second of 25 teams with 107 points. (Saquoit Valley took top honors with 102.) Theo Henderson finished second overall in a field of more than 200 runners, covering the three-mile course in 17:27, while teammate Nick Farrell was fourth in 17:48.

Three other Haldane runners — Adam Silhavy finished in 18:27, Jonas Petkus in 18:59 and Kenney McElroy in 19:13 — finished in the top 50. Andrew Gannon, who ran without his shoe for a while, crossed the line at 20:09 and Nolan Shea at 20:50. Other runners for the boys were Kyle Kisslinger, Ellis Osterfeld and Brett Schwartz. 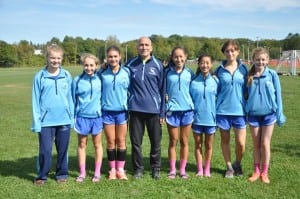